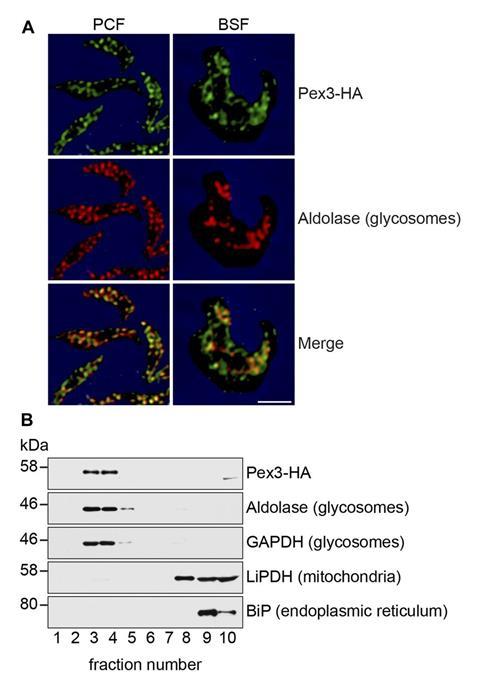 The protein Pex3 expressed in Trypanosoma brucei at two different stages in its lifecycle. The discovery of the protein after decades of fruitless searching will give drug discovery researchers a boost in tackling these neglected tropical diseases

A chance decision to attend a lecture led to the discovery of an elusive protein and promising drug target for parasites causing some of the world’s most notorious neglected tropical diseases – Chagas disease, sleeping sickness and leishmaniasis. As this protein had been so slippery and hard to track down some had doubted that it even existed in these parasites at all.

Trypanosomes are a group of protozoan parasites transmitted by insect bites that cause sickness, morbidity and death in humans and livestock in developing countries. They are responsible for sickening millions of people every year and cause the deaths of tens of thousands of those infected, but the diseases these parasites cause do not receive the attention others do as they mostly affect poorer people in the Global South.

For decades trypanosome researchers have searched for a protein called Pex3 within the genomes of trypanosomes. This is because Pex3 is described as the master regulator for the formation of organelles called peroxisomes in a wide range of organisms. Trypanosomes were thought to use Pex3 and the other Pex proteins to assemble a specific set of peroxisomes called glycosomes, which are essential for the breakdown of glucose from host blood.

‘Pex3 was the enigma,’ says Richard Rachubinski of the University of Alberta and co-author of work describing trypanosome Pex3.1 While several members of the parasite Pex family were previously described, Pex3 remained elusive, leading some to speculate that trypanosomes lacked the protein and used other mechanisms to form glycosomes.

However, Rachubinski’s decision to attend a guest lecture during a student research day introduced him to the software HHPred, which searches for proteins in genome data by secondary structure rather than amino acid sequence. Armed with this new tool he got the first evidence for the existence of Pex3. It’s presence and role in glycosome formation was then experimentally confirmed and RNA interference experiments showed that knocking out Pex3 killed 100% of the trypanosome parasites.

Pex genes are common in eukaryotes, from humans to yeast to fungi and their sequences are usually similar. However, trypanosomes’ Pex genes are quite different says Paul Michels, a visiting professor at the University of Edinburgh. ‘If you compare sequences of trypanosome peroxisomes with the yeast and mammalian proteins the similarity is quite low.’ Michels has studied trypanosome peroxisomes for most of his career and he says that the differences are likely due to the branching off of trypanosomes from the rest of the eukaryotes roughly two billion years ago. While this made discovering Pex3 harder it simplifies drug development because any molecule targeting the parasite protein shouldn’t interfere with the host versions. ‘The proteins are very different and this is what we are exploiting.’

For Grzegorz Popowicz, structural biology and drug discovery expert at the Helmholtz Zentrum in Germany, this work is an important first step to a new treatment for trypanosome diseases. Developing an inhibitor that blocks Pex3 from interacting with the other Pex proteins though is a difficult task because protein–protein interactions are harder to target than protein–enzymes interactions. ‘The road from structure, to inhibitor to drug is a complex and difficult road, but by no means impossible.’ Inhibitors for other Pex protein interactions, specifically Pex14 and Pex5 do already exist.2

Rachubinski is now screening molecules previously approved by the US Food and Drug Administration for action against Pex3 and hoping for a hit. ‘It’s very satisfying on a scientific level and also because maybe we can do something for emerging nations,’ he says.