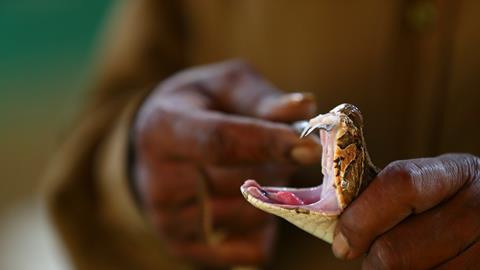 WHO gears up to solve the world’s antivenom crisis

Last month, the World Health Assembly in Geneva demanded action on a neglected tropical health problem that receives little attention – even when compared with overlooked diseases – snakebite. This is despite snakebites causing 100,000 deaths every year. The resolution called on countries to join forces to ramp up production of antivenom and tighten regulation around its use.

‘The antivenom crisis is very acute in sub-Saharan Africa,’ explains Julien Potet, policy adviser on neglected tropical diseases at Médecins Sans Frontières (MSF). ‘Some poor products with a low cost per vial have entered the African markets, including products that are just not prepared with the geographically appropriate venoms.’

Substandard antivenom is one facet of sub-Saharan Africa’s snakebite crisis. ‘Even taking into account the bad products, there is not enough product available to treat everyone who needs it,’ says David Williams, a clinical toxicologist and herpetologist at the University of Melbourne, Australia. ‘Often what is there is also simply too expensive. Patients can’t afford a full treatment and many only receive a partially effective dose or a dose that is not effective at all.’ This leads to a vicious cycle: patients lose confidence in products and go to traditional healers for treatment instead. That drives down sales and consequently less is made.

Africa reports 32,000 snakebite-related deaths every year. While there is more press coverage now, thanks to efforts by MSF and other organisations, the ‘crisis’ has been in the making since the 1990s, says Jean-Philippe Chippaux, a physician at the French Research Institute for Development, France, and honorary president of the African Society of Venomology. One big reason for the ongoing crisis has been African governments’ inability to incentivise local drugmakers to make antivenom. ‘It’s not as simple as producing a drug or vaccine – a snake species can have more than 100 different toxins in the venom. It is very difficult and expensive to produce and no African government is capable of doing that,’ says Chippaux. Moreover, he adds, the majority of doctors in sub-Saharan Africa aren’t sufficiently trained to use serum.

Added into all this is the issue that the antivenom market simply isn’t that lucrative for big pharma. Market research firm Transparency Market Research put the global antivenom market at $1.7 billion (£1.3 billion) in 2016. Sanofi Pasteur halted production of its FAV-Afrique antivenom, effective for several African snakes, in 2010. Sanofi cited cut-price competition for the withdrawal.

Consquently, smaller manufactures have flooded the sub-Saharan market with their products. One reason for the poor quality of these antivenoms is a lack of clinical trials. ‘Many products have been used for decades without actually having gone through formal clinical trials. With products already on the market, we often rely on practical experience and there is no pressure to get formal evidence,’ says Williams. He adds that African governments have a weak regulatory mechanism that manufacturers can exploit. On top of this, many of the antivenoms exported to Africa from other regions are ineffective against African snake species’ venoms, says Williams.

To address the global antivenom crisis, the WHO is taking action, starting in Africa. It is now carrying out a thorough assessment of manufacturers that supply antivenoms to the continent. This assessment includes detailed plant inspections and independent lab test of antivenoms. Williams says that Asia will be the next big region the WHO will focus on.

Williams adds that the priority for the newly formed WHO snakebite working group is to conduct clinical trials of antivenoms that are already on the market. Few antivenoms used in Africa have been subjected to clinical trials. Even India, which has six pharmaceutical firms producing them, has never formally tested an antivenom in a trial. ‘Studies of Indian antivenoms in Sri Lanka and Nepal raised many red flags, especially regarding effectiveness and safety,’ says Williams. ‘Clinical trials are very important tools – the key things they can tell us are: will this treatment harm the patient, does this treatment actually work and, if so, at what dosage?’

The antivenom shortage doesn’t just affect Africa. It’s a global problem. Last month’s WHO resolution urged member countries to make antivenom therapy more affordable. In India, government hospitals provide antivenom free of cost, but rural hospitals often run out, forcing people to approach private hospitals. One 2013 study found that four out of 10 victims of snakebite in the state of Tamil Nadu, India, had to borrow money to pay for treatment.1

The reasons for shortages in India’s public hospitals are multi-faceted. Soumyadeep Bhaumik, a research fellow at India’s George Institute for Global Health, blames supply chain problems. Bhaumik explains it is part of a bigger problem of the malfunctioning public health sector in India. When stocks of antivenom are low they aren’t replenished by local authorities in time, leading to shortages. ‘India’s regulatory mechanism complicates the problem further,’ Bhaumik says. ‘The government’s price controls might have made it more lucrative for manufacturers to simply export for higher revenues.’

Bhaumik adds that the WHO resolution should push the Indian government to overhaul healthcare and solve the issue of antivenom availability. ‘As almost half of the world’s snakebite-related deaths occur in India, the country is under pressure to act,’ he says.

Meanwhile, new approaches to make antivenom production simpler and cheaper are being developed. Currently, anti-venom production is laborious. Venom is extracted from a snake, then administered to a horse or a sheep in small doses to evoke an immune response. The animal’s blood is then drawn and purified to obtain antibodies that act against venoms. One promising approach that would make antivenom production quicker and cheaper is recombinant antivenoms. These antivenoms are produced by expressing therapeutic monoclonal antibodies, which can bind to a specific protein or a toxin in snake venom, in an engineered cell line. As a snake venom is complex and consists of many toxins, mixtures of monoclonal antibodies, called recombinant antivenoms, could neutralise a snake’s venom in the future.

Potet says the WHO needs to closely monitor promising research. ‘It’s important for the WHO to tell researchers what is truly needed: do we need heat stable products? What is the minimum potency of the required product? What is the maximum price we can afford? The researchers have good ideas but they don’t know the field very well,’ he says.

Meanwhile, Williams advises caution. ‘It’s early days, we would be extremely foolish to do away with animal-derived antivenom with no alternative,’ he says. ‘For the next 10 years, people still need to have access to those products, and we should keep improving them.’