Enzyme evolved that can perform reactions new to nature 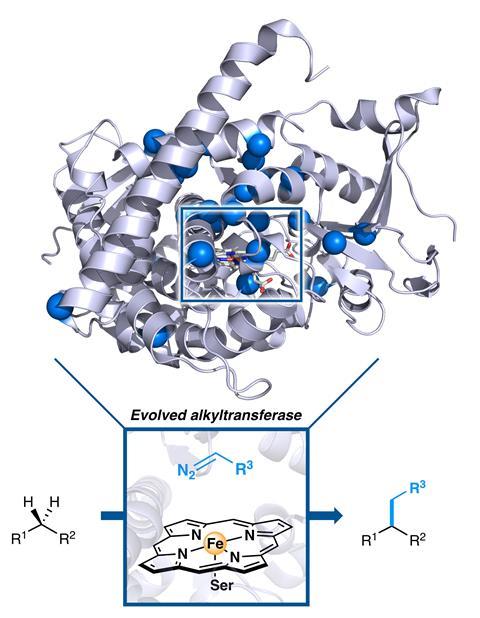 Directed evolution has been used to create an enzyme that is capable of forming carbon–carbon bonds in a way that no natural enzyme can. The team, which includes directed evolution pioneer and 2018 chemistry Nobel laureate Frances Arnold, hopes that this strategy can be used to selectively functionalise C–H bonds in a more environmentally friendly manner without the need for precious metals.

C–H activation is regarded as one of the most important strategies in molecular synthesis, as it can unlock a wide range of organic molecules to make drugs and new materials. However, selectively functionalising C–H bonds is a complicated challenge that is usually carried out with precious metal catalysts under harsh conditions in organic solvents.

Now, a group of US chemists has used directed evolution of enzymes to create a mutant cytochrome P450 enzyme capable of constructing C–C bonds from sp3 C–H bonds with both high activity and selectivity.1 The strategy these enzymes were directed towards, carbene C–H insertion, is completely unknown in biology. These mutant enzymes, through the marriage of biology and chemical intuition, bring greener C–H functionalisation a step closer.

‘There has been wonderful creative work in small molecule catalysis that laid out the capabilities that metals have to do this chemistry, but there are a number of issues in selectivity and reactivity that we were hoping an enzyme could address,’ says Arnold.

In order to artificially evolve an enzyme a starting point is needed. The team initially screened 78 enzyme variants including cytochrome P450s, cytochrome cs and globin homologues, of which two showed promising activity.

‘We initially targeted more enzymes with haem cofactors, because we were aware that this iron containing cofactor could perform some non-natural chemistry,’ explains lead author Ruijie Zhang at Caltech. ‘We chose C–H functionalisation as a model reaction because it represents unexplored territory.’

By applying multiple rounds of directed evolution the resulting mutant variants were able to functionalise diverse substrates containing benzylic, allylic or α-amino C–H bonds with excellent selectivity and high turnover numbers. The most evolved mutants were able to synthesise several natural products such as lyngbic acid, which is made by marine bacteria.

This enzymatic approach offers a greener and cheaper process compared with the use of more conventional rhodium-based catalysts. In addition, it can access complementary products since the diazo compounds used as a carbene source are based on a different fragment compared with rhodium chemistry. This offers a whole new set of carbene fragments that can be added to molecules, thus opening fresh opportunities for organic synthesis.

Thomas Ward from the University of Basel in Switzerland says that ‘the most impressive part of this paper is that haemoproteins containing their native iron–haem cofactors can catalyse reactions that one would typically carry out with precious metal catalysts. Professor [John] Hartwig [at the University of California, Berkeley] published in 2016 two excellent papers2,3 whereby he substituted the iron ion in a haemoprotein by an iridium ion, thus enabling his group to achieve new-to-nature C–H functionalisation reactions. Frances Arnold, in her recent publication, demonstrated that the same chemistry can be achieved with the native iron ion.’

Arnold says that a driver of this project was industrial applications. Rather than relying on precious metals, whose mining causes tremendous environmental damage, clean and green biocatalytic systems would be a much more sustainable way to produce new molecules. ‘Given the abundance of haem proteins in nature, one could imagine that a variety of diverse potential catalysts could be discovered through advanced bioinformatics and modelling tools,’ says Anca Pordea from the University of Nottingham, who was not involved in this study. ‘Genetic engineering will then allow their evolution to expand the scope of carbene insertion towards, for example, the use of α-functionalised carbenes, thus rivalling noble metal-based small molecule catalysts.’