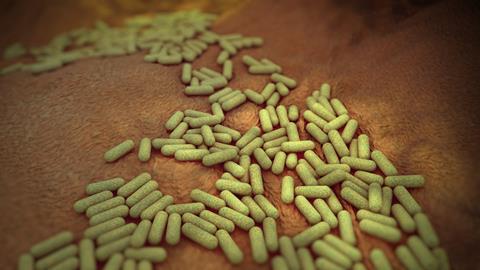 A new oral drug candidate can make old antibiotics effective against drug resistant bacteria once more. It’s the first of its kind in over 40 years and could open new doors in the fight against antibiotic resistance by making treatment of infections cheaper and simpler.

Avibactam, a β-lactamase inhibitor that can inactivate bacterial enzymes that destroy β-lactam antibiotics, was approved in 2015 but was only suitable for intravenous administration. This meant the drug could only be administered alongside antibiotics in hospitals or other medical centres by skilled medical professionals. By tweaking the drug’s chemistry, researchers have made a new version of avibactam that is orally bioavailable and also able to inhibit a wider spectrum of β-lactamases.1 The research group from Arixa Pharmaceuticals in the US who developed the novel prodrug says it could restore the bacteria-killing ability of many antibiotics that are now in effect useless in the face of growing antibiotic resistance.

Although the bacterial machinery that antibiotics target remains the same, ‘what’s changed is the evolution of β-lactamases, allowing [bacteria] to inactivate antibiotics’, explains Arixa co-founder and chief scientific officer Eric Gordon. Co-dosing β-lactamase inhibitors with antibiotics was once sufficient to mount an effective defence against bacterial infections. But the rapid global prevalence of resistant bacteria has put pressure on scientists to develop new strategies to evade resistance mechanisms.

Gordon says his group’s development of oral, broad-target avibactam – which is already US Food and Drug Administration-approved for intravenous use – can restore the potency of antibiotics like cephalosporins for eventual human use. ‘Avibactam is such a good inhibitor that it covers many of the 2700 types of β-lactamases out there that we know of. What it effectively does is let the antibiotic work the way it did originally.’

The key to creating oral avibactam lies with its sulfate moiety. Ordinarily, avibactam finds itself in a catch-22 situation as the sulfate leads to poor bioavailability, but removing it means it’s no longer a good inhibitor of β-lactamases. Based on previous work that showed O-neopentyl groups can protect sulfate,2 Gordon’s team used these hard-to-remove groups to render the sulfate moiety unreactive and therefore unable to interfere with avibactam’s oral bioavailability. Once the drug enters the body and is taken up the neopentyl group is cleaved by enzymes in the body to leave the active avibactam.

‘A neopentyl ester is virtually the only type of sulfate ester that is rock stable,’ he says. ‘For us, we wanted to use them to prodrug the sulfate. We had to ask ourselves how to then get the neopentyl groups off the sulfate in vivo where you can’t use aggressive conditions and strong nucleophiles. The answer turned out to be setting up an intramolecular displacement of avibactam – giving rise to the series of oral prodrugs – as making these compounds allowed them to be acted upon by esterases.’ 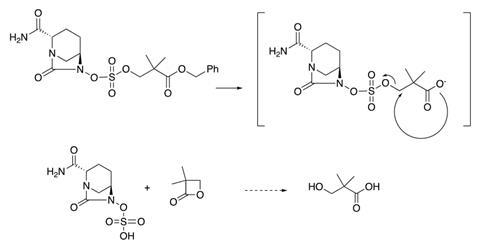 The mechanism of avibactam release

Making prodrugs from sulfate-containing drugs is something that hasn’t been attempted before, according to Gordon. The reactive alkylating nature of sulfate esters discourages medicinal chemists from delving into this area, he points out, noting that earlier work showed O-sulfate could be viable within β-lactams.3

‘They were smart to apply [the sulfate ester approach] the way they did,’ observes biological chemist Nathaniel Martin from Leiden University in the Netherlands. ‘It’s uncommon chemistry… but it seems to work well and was obviously good enough to prepare the compounds in quantities suitable for evaluation, which is usually the first big challenge.’

Given orally to animals, Gordon’s group reported 80% avibactam absorption in monkeys and 100% in dogs, a fact that Sang Hee Lee of Myongji University’s Drug Resistance Proteomics lab, South Korea, says looks promising. ‘It could be very helpful in tackling the problem of carbapenem resistance [in Enterobacteriaceae] due to this very high bioavailability,’ he says.

The work also showed that pairing avibactam with broad spectrum cephalosporins could make a wide range of drug resistant bacteria susceptible to these antibiotics once more. Gordon says that a ‘vast proportion’ of clinical gram-negative strains of bacteria could potentially be targeted.

But Martin adds there is still a crucial step missing. ‘They didn’t prove the compound was able to work in combination with ceftazidime the way that the intravenously administered version does.’ Gordon’s group plans to address this soon though. Arixa Pharmaceuticals has recently secured seed funding of $8 million (£6.2 million) to conduct the first clinical trial of oral avibactam to treat resistant gram-negative bacterial infections next year.

It’s hard to predict how much it’ll sell for if it reaches the market because, as Gordon points out, ‘it’s never been as poor an economic environment for antibiotics… And it’s an unfortunate dynamic which has to change.’ He is hopeful, however, that their promising results so far could make oral avibactam-paired antibiotics the ‘21st century augmentin’ – a commercial antibiotic combination that has sold billions of doses over its lifetime.

‘It is remarkable that 40 years have lapsed since another oral β-lactamase inhibitor has come along even though [it] is a tremendous medical need,’ he adds. ‘It makes us very happy and excited as a group that we can possibly help humanity with a drug like this.’