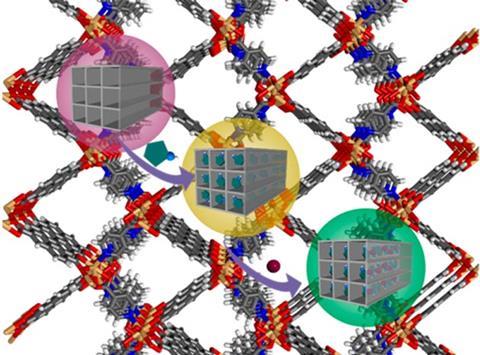 MOFs are usually known for their catalytic and gas storage capabilities owing to their porous, sponge-like structures. They generally lack electrical conductivity because it’s difficult to achieve spatial and energetic electronic overlap between the insulating organic linkers and metal ion building blocks that form the framework. But researchers are rising to the challenge because the tunability and stability of MOFs could allow for simple manipulation of electronic properties, which is difficult in existing materials, and bring forth a new generation of electronics.

The past couple of years have seen promising developments of MOFs imbued with electrical conductivity, including thin films that act as chemical sensors. But enhancing the electrical conductivity of such MOFs has only ever been achieved to around a million times more than the starting material. Now, Nirmalya Ballav and coworkers at the Indian Institute of Science Education and Research have filled the pores of a cadmium-based MOF with the conducting polymer polypyrrole and boosted the material’s conductivity by a billion.

‘We simply thought to fill up the pores with conducting chains of polymers like polyaniline, polypyrrole and polythiophene, which are well known as intrinsically conducting polymers,’ says Ballav. ’The most challenging part was to find an appropriate combination of MOF and conducting polymer – it took us almost four years of screening various systems to rationally design a MOF suitable for hosting pyrrole monomers as the guest molecules.’

The researchers settled on a cadmium-based MOF with one dimensional nanochannels, inside which pyrrole monomers could polymerise into one dimensional polypyrrole chains upon immersion in iodine. This enabled a unique host–guest interface in the confined space, which involved a weak but important non-covalent interaction between the MOF and polypyrrole that let them ‘talk’ to each other electronically and create a path for electrons to flow across the material while sustaining fluorescence. Fluorescence would normally be quenched by strong interactions between the host and guest molecules but the interactions are only weak in the team’s material. Conductivity and fluorescence is a rare combination that could provide a route towards multifunctonal MOFs suitable for optoelectronics, including solar cells and imaging devices.

’The development of robust electrical conductivity in MOFs is an exciting prospect,’ says Aron Walsh, who investigates electroactive MOFs at Imperial College London in the UK. However, he suggests the billion-fold increase isn’t as impressive as it sounds. ‘The conductivity changes from negligible to very small. The higher value reported is at the lower end of conductivity found in typical inorganic semiconductors and for polypyrrole itself,’ he explains. ‘Nonetheless, it demonstrates a promising application of hybrid materials.’