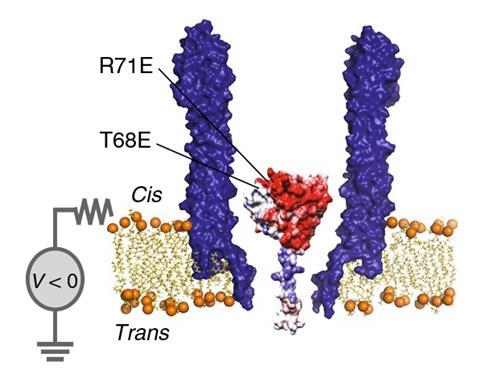 An enzyme shifts rapidly between at least four different 3D shapes as it catalyses a chemical reaction, researchers have discovered. Observing this enzymatic metamorphosis was made possible by trapping individual molecules inside nanopores in an electric field. The approach could aid understanding of how enzymes work, which could help create more powerful ones or even for engineering artificial enzymes.

After the first enzyme crystal structures were solved in the 1960s, scientists realised that enzymes fold into a three-dimensional shape, forming an active site for substrates to fit into and catalyse a reaction.. However, growing evidence suggests that some enzymes shift between multiple ground-state shapes, or conformers, during a reaction.

Understanding such changes and their hierarchies could help optimise enzyme performance in applications. This requires studying them at the single molecule level but existing methods to achieve this – including fluorescent labelling – are limited, often because enzymes’ conformational changes are too small to be detected.

Now, Giovanni Maglia’s group at the University of Groningen, the Netherlands, has overcome this by putting an individual globular enzyme, dihydrofolate reductase (DHFR), inside a nanopore. Measuring modulations of ionic current through the pore has revealed that the enzyme folds into four different 3D structures.

‘The conformers show different affinities for substrates and products, and they exchange when the reaction crosses the transition state,’ explains Maglia. ‘We propose that this mechanism is important to increase the efficiency of product release, which is the rate limiting step in the catalysed reaction. This observation suggests therefore that enzymatic reactions are more complex than previously expected.’

Nanopores are tiny openings spanning an insulating membrane – in this case the nanopore is a protein and the membrane is a lipid bilayer. Although ionic currents through nanopores have been used for over a decade to study how ligands bind to proteins at the single molecule level, this is the first time that individual steps in an enzymatic reaction have been observed inside a pore.

The researchers engineered DHFR – a frequently studied model enzyme – with a polylysine tag to trap it inside a modified cytolysin A pore under an electric field. When a negative potential is applied, DHFR enters the nanopore and the tag sticks to the pore’s negatively charged interior.

The electric potential on the membrane generates an ionic current across the pore. When folate and the co-factor nicotinamide adenine dinucleotide phosphate (NADPH) are added, their binding to DHFR alters the flow of ions, revealing the enzyme’s different conformations while reducing the substrate to tetrahydrofolate.

The reaction catalysed by dihydrofolate reductase

‘We did not expect to observe multiple conformers of the enzyme,’ says Maglia. ‘We were also surprised to discover that ionic currents through nanopores are so sensitive to tiny differences in the structure of proteins.’

‘While the approach itself is an impressive experimental feat, the most remarkable finding is the suggestion that substrate binding and turnover can lower energy barriers to conformational exchange in enzymes,’ says supramolecular chemist Scott Cockroft at the University of Edinburgh, UK. ‘Understanding the principles governing such dynamics might be exploited for re-engineering known enzymes or even for developing artificial enzymes.’