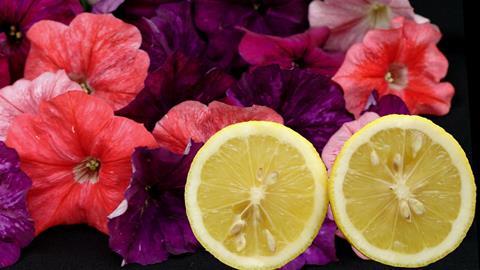 Dutch scientists have unravelled the mystery of why some citrus fruits are eye-wateringly sour and others are scrumptiously sweet.1 The discovery that a mutation in two proton pumping proteins can produce sweeter fruit may allow farmers to tune their harvest to customers’ tastes.

The researchers, led by Ronald Koes and Francesca Quattrocchio at the University of Amsterdam, became interest in this area during an effort to identify the genes responsible for the colour of petunia flowers. They looked for differences in two variants of this flowering plant – the standard one with red–purple petals and a blue mutant. ‘The measurements of the crude extract of the petals showed that the blue flowers are less acidified than the reddish ones,’ says Quattrocchio.

The team realised that the mutation affected the acidification system in cell compartments called vacuoles, where colour pigments are also stored. ‘These pigments behave like pH indicators,’ Quattrocchio explains. ‘If there is a change in pH in the lumen of the vacuoles, you see this translated in a change of colour.’

In plant cells, vacuoles are normally more acidic than the surrounding cytoplasm. This gradient is controlled by protein pumps that transport protons across the membrane into the vacuoles. In the red–purple flowers, the pH difference between vacuole and cytoplasm is unusually large.

In 2014, the team revealed the two interacting protein pumps responsible for hyperacidification in petunia petals.2 The blue colour of petunia mutants is due to a mutation in the genes encoding for those proteins and this results in a less acid vacuole which the pigments respond to.

This got the team wondering whether proton pumps play a role in extremely acidic citrus plants. How juice-containing vacuoles in citrus fruits are hyperacidified was a long-standing unanswered question. ‘We studied the differences between the sweet and sour lemons just like we did with the acidic red and less acidic blue petunia, and we found out that the pumps involved were the same,’ Quattrocchio says.

Emily Liman, an expert in taste perception at the University of Southern California, US, describes the work as ‘fascinating’. ‘These investigators found the causative mutation that lowers the level of expression of the proton pump in the less sour varieties of lemons,’ she explains.

The researchers identified the same mutation in other citrus fruit including oranges and limes, and predict that the same pumps control acidity in non-citrus fruits such as grapes and strawberries. ‘Breeders could use this knowledge, in principle, in two ways,’ says Koes, to make genetically modified fruits or for molecular breeding.

In classical plant breeding, species are interbred to produce fruits with desirable properties. This process is slow, as breeders must wait for plants to become established enough to produce fruit for tasting.

‘If you know which DNA sequences to look for, it’s really easy to isolate a bit of DNA from a plant just a few weeks after germination and tell which of those acid genes that you want to have are in there,’ Koes says. ‘One could determine the potential acid content, and the expected taste of a fruit, using simple molecular methods such as polymerase chain reaction,’ adds Liman. This means thousands of different new variants could be rapidly screened to allow farmers to tune their next harvest to hit consumers’ sweet spot.