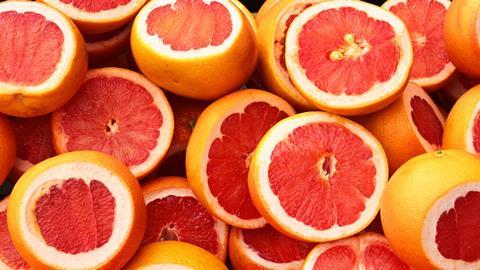 This week, we get some insight into Florence Schechter’s morning routine…

It’s a normal Saturday morning. You’ve woken up, showered, maybe got angry at the newspaper, had breakfast and popped your morning pills. Nothing out of the ordinary, about half of adults in the UK take prescription medication. The only thing different is that you’ve heard that eating grapefruit is a healthy way to start the day. And it may affect your health, but it might not be in the way you expect.

In 1998, the grapefruit juice effect was discovered. A class of compounds called furanocoumarins in grapefruit, and indeed most citrus fruits and apples, are responsible for a bizarre phenomenon. They can interact with a host of different drugs, leading to either higher or lower levels of the drug in the bloodstream, depending on the particular drug. 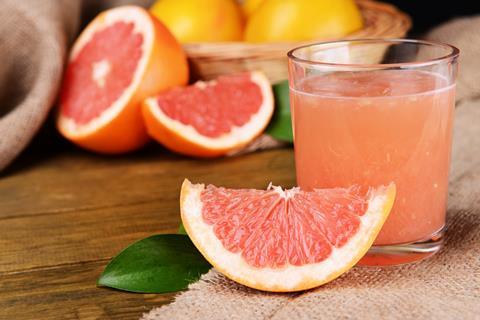 The grapefruit juice effect was discovered during a study investigating whether the high blood pressure medication, felodipine, interacted with ethanol. According to the initial study, ‘Grapefruit juice was chosen to mask the taste of the ethanol following an assessment of every juice in a home refrigerator one Saturday evening.’

I have a feeling like that Saturday evening was not initially work related. But it led to a discovery that has entirely changed how medications are prescribed.

The blood pressure medication they were investigating was much more effective when taken with the cocktail compared to on its own, and it was discovered that the juice, rather than the alcohol, was responsible.

Angelicin, one of the most common furanocoumarin isomers

The offending class of compound, the furanocoumarins, interferes mainly with the cytochrome P450 enzyme family, particularly cytochrome P450 3A4 a.k.a. CYP3A4. Try saying that after a few grapefruit vodka cocktails.

When a drug is taken orally, the drug enters the bloodstream by passing through the cell wall of the gut. Those epithelial cells will metabolise the drug, meaning that the resulting concentration in the blood is lower than what was taken in something called the first pass effect. About 50% of known drugs are metabolised in the gut by the enzyme CYP3A4. Furanocoumarins inhibit this enzyme, which means more of the drug will enter the bloodstream than expected. This may lead the drug to become more effective, for example in the case of felodipine, or the drug to become inactive, as is the case with the antidepressant sertraline. Sertraline must be converted in the gut into its active form desmethylsertraline in order to work, but the furanocoumarins prevent that from happening.

Psoralen, another of the most common furanocoumarin isomers

The inhibition of this enzyme is irreversible, meaning that the body needs to make more of the enzyme before any more drugs can be properly metabolised, so that bite of grapefruit can have lasting effects for up to a day.

So far over 85 drugs have been shown to be victim to the grapefruit juice effect. Examples include paracetamol, diazepam, amphetamines, statins, AIDS medication, warfarin, Viagra, morphine, codeine and Ambien. And it effects even the more everyday drugs like caffeine, and depending on what your life is like, cannabis, ketamine and crystal meth.

Because of the potential for furanocoumarins to increase the bloodstream concentration of a drug to higher than expected, it can lead to unfortunate consequences. There have been cases of hospital admissions, for example a man who was taking the immunosuppressant Tacrolimus after a liver transplant and even though he knew he shouldn’t, had marmalade on toast which led to a 500% greater blood concentration of the drug and acute renal dysfunction.

Furanocoumarins are produced by plants like the wild parsnip, celery and grapefruit, and help to keep pests away. But evolution could have never predicted the development of so many innovative drugs, and this is one those odd coincidences that happens so often in nature. 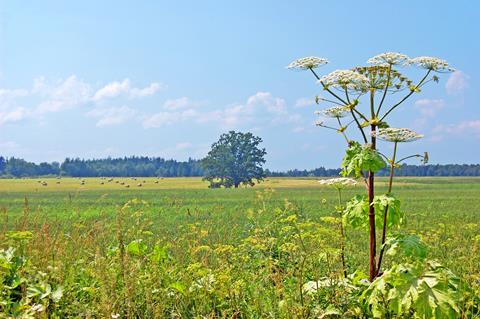 Giant Hogweed towering above a field

Even if you’re not on drugs or never eat grapefruit, furanocoumarins have the potential to ruin your day. They’re found in the leaves of giant hogweed, a plant native to central Asia but now invading the UK, particularly around streams and rivers. Contact with hogweed can lead to painful skin burns, as the furanocoumarins in the sap act interact with DNA when exposed to UV light. Luckily, it’s quite easy to spot – giant hogweed can grow more than 5 metres tall.

On a serious note, if you’re on any prescription medication that’s taken orally, check with your doctor whether it’s on the grapefruit hit list. And the meantime, it’s a great excuse to have that full English instead.

That was Florence Schechter with furanocoumarins and the ‘grapefruit effect’ that can have serious consequences for those with a taste for citrus fruit. Next week, how a footballer’s climate concerns led to a sustainable chemistry company.

Over the next few years they worked in partnership with researchers at the Polytechnic University of Milan and the University of Pisa to develop technology for the production of levulinic acid. The United States Department of Energy had identified the acid as one of 12 platform chemicals for the development of green industrial chemical processes.

Mike Freemantle tells the story of Mathieu Flamini’s GFBiochemicals in next week’s Chemistry in its element. Until then, email chemistryworld@rsc.org with any questions or comments, or tweet @chemistryworld. I’m Ben Valsler, thanks for joining me.