Largest hollow cage molecule yet made from 1000 atoms 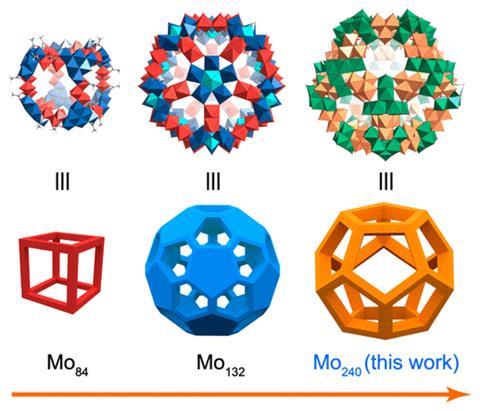 The molybdenum-based cage is the largest ever created

A giant hollow molecule containing 1000 atoms self-assembled into an unusual pentagonal dodecahedron has been created by researchers in China. The molecule’s 240 molybdenum ions make it the highest nuclearity hollow dodecahedra cage ever reported – and it’s a superb proton conductor, too.

Although large and highly symmetric cages are usually difficult to synthesise, this 1000-atom one self-assembled when ammonium heptamolybdate, copper sulfate, hydrazine and sulfuric acid were mixed and kept at 120°C for four days.

X-ray structural analysis revealed the dark red crystals to comprise 20 tripod-shaped hexamolybdate and 30 cubane-type tetramolybdate building blocks. Its inner cavity is a roomy 1.8nm wide and can be accessed through 12 pentagonal windows.

In its solid powder form, the cage showed the highest proton conductivity value among any polyoxymetalate. At 80°C and 98% relative humidity, its proton conductivity even matches that of high performance MOFs, which could make it useful as a solid electrolyte.