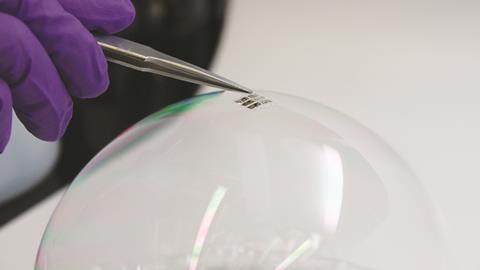 Lightest ever solar cell sits on the surface of a bubble 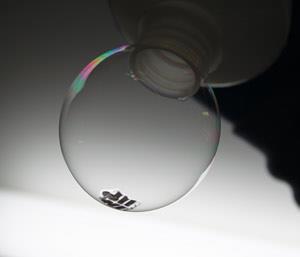 Solar cells that are so thin and lightweight they can be draped over the surface of a soap bubble have been made by researchers in the US.

Vladimir Bulovic, Annie Wang and Joel Jean from the Massachusetts Institute of Technology claim to have made the thinnest and lightest solar cells ever. Their prototypes are 1.3µm thick and weigh just 3.6g/m2. The key to producing such thin solar cells is the fabrication process, which uses vapour deposition to manufacture the supportive substrate and a protective overcoat (both made of poly(p-xylylene), a polymer which can be made into thin, flexible sheets) together with the light-absorbing components in a single process, rather than making each layer separately and then assembling them. The fabrication takes place within a vacuum chamber at room temperature, and no solvents are used, which avoids the cells becoming contaminated with substances that could reduce their performance.

In this case, the solar cells themselves were organic – based on tetraphenyldibenzoperiflanthene (DBP) – but the team say the manufacturing process could be compatible with other materials such as perovskites or quantum dots. While the solar cells are not particularly efficient, in terms of power-to-weight ratio they outperform commercially available solar panels, with an output of 6W/g – around 400 times higher than a typical silicon-based solar module with a heavy glass cover.