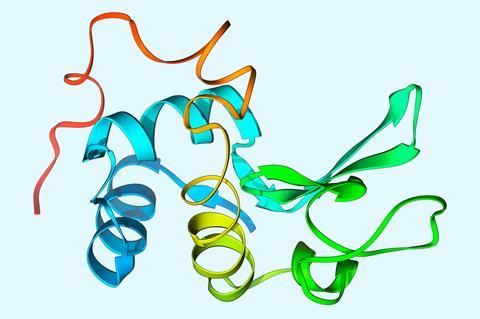 A flow chemistry setup can synthesise small proteins that are more than three times larger than the polypeptide chains that can be made using conventional techniques.1 The new technique is very rapid and can be used to add both natural and unnatural amino acids at any position on the protein backbone, opening new possibilities in drug discovery and materials science.

The chemical composition of proteins produced by adapting biological systems is usually limited to natural amino acids. Although the expansion of the genetic code has made it possible to incorporate some unnatural units into proteins, the flexibility offered by chemical approaches is peerless. To make synthetic proteins, chemists rely on solid phase peptide synthesis, which involves building a peptide chain, one amino acid at a time, on a polymer resin. But this approach can only produce peptides up to 50 amino acids long, so several fragments must be created and stitched together to obtain proteins. This makes the approach time-consuming and laborious.

Researchers working with Bradley Pentelute at the Massachusetts Institute of Technology, US, have overcome this limitation using a flow reactor. Their new automated chemical protocol has allowed them to prepare peptides up to 164 amino acids long in hours – something that would take several days of synthesising and then stitching together smaller peptides using conventional techniques. ‘Before, we couldn’t make long sequences, we could only make peptides,’ Pentelute says. ‘Now, we can make a protein on the machine, and that’s the result of optimising the chemistry.’

Over the past five years, the team has developed an automated fast-flow protein synthesis system, called the Amidator, which can be used to build peptides very quickly.2 Nina Hartrampf, who recently moved to the University of Zurich, Switzerland, explains that some parameters have now been improved to synthesise longer polypeptide chains. ‘We screened different solvents, temperatures, coupling agents and so on to find a set of conditions that works best for every building block,’ she says. ‘But we also used data that was generated automatically and tried to understand whether we can tailor these conditions towards different amino acids. That turned out to be very important for the overall optimisation process.’

Pentelute adds that running the reaction at a high temperature, 90°C, plays an important role. ‘We found that you essentially have much better chemistry because the polypeptide, when it’s growing on the solid support, doesn’t aggregate as much.’ He points out that using a flow reactor gives more control over the heating process.

With the new approach, the researchers can add an amino acid to the growing peptide chain every two-and-a-half minutes. This is still far slower than nature’s supreme chemical synthesiser, the ribosome, which can add as many as 20 amino acids per second to a growing polypeptide chain. But it is as much as 10 times faster than conventional solid phase synthesis. Azin Saebi, a graduate student at Pentelute’s lab, says that it took her about four hours to synthesise 110-amino-acid barnase, a bacterial enzyme that cleaves RNA. ‘Then you need to go over the process of purification and folding,’ she adds. The researchers made nine different synthetic proteins and found that their structure and function were similar to those produced by ribosomes.

‘This method enables the synthesis of peptides at an impressive speed,’ comments Ashraf Brik of Technion, Israel, who was not involved in the study. ‘The field of chemical protein synthesis will largely benefit from it.’

André Nadler at the Max Planck Institute of Molecular Cell Biology and Genetics in Germany notes that solid phase peptide synthesis has been around for decades. ‘Typically, such mature technologies only see incremental improvements, not sudden three to four-fold jumps in scope,’ he says. ‘This new synthetic strategy is one of those incredibly rare cases, which explains the considerable excitement in the scientific world. Research projects that seemed unrealistic a few days ago suddenly look doable. Thus, I expect that flow chemistry approaches will be rapidly implemented in many labs in the next years.’

Bradley Nilsson at the University of Rochester, US, agrees that the approach will be enthusiastically taken up by protein scientists. ‘It’s an impressive realisation of the long-standing goal to prepare proteins by total chemical synthesis that promises to accelerate access to proteins for research purposes and enable the engineering of proteins that contain non-canonical amino acids without the need for complicated techniques,’ he says. But he adds that chemical protein synthesis is expensive and the new method doesn’t solve this problem.

Pentelute says that another limitation is the quantity of protein that can be made with the current setup. ‘We make enough for research in the laboratory, but if we wanted to make a commercial product, we would have to figure out how to scale the chemistry so that we can make much larger amounts, like gram quantities.’