MOFs with a heart of glass 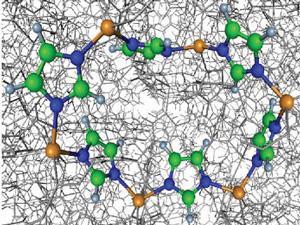 Metal–organic frameworks (MOFs) have long been the preserve of the solid state domain, but a group of scientists from Europe, China and Japan have now produced a molten MOF and cooled it to form a unique glass. Such a discovery may both revolutionise glass manufacturing and finally unlock the potential of MOFs in carbon capture and gas storage.

The sponge-like, porous nature of MOFs has been exploited by chemists seeking solutions to fairly specialised problems in recent years – be it in disabling nerve agent simulants, sensing the presence of ammonia or being used as a simple molecular switch.

In the majority of these applications the MOFs used share a common identity, according to Tom Bennett from the University of Cambridge, UK. ‘99% of all these reported, porous MOFs in the literature are crystalline solids,’ says Bennett. ‘But yet there are lots of other different states of matter out there, such as liquids and amorphous solids.’

The reason why researchers have never seen such an inorganic–organic framework in a different phase is for a very simple reason, according to Bennett: ‘If you heat something with carbon in, it’s going to burn.’ MOFs typically decompose before they even get the opportunity to melt and form a new crystal structure.

Bennett goes on to argue that if MOFs can exist in different states, researchers will be able to easily tailor and manipulate their structure like the blacksmiths of old. ‘We’ve been casting things like metal alloys for centuries now,’ he explains. ‘It’s really trying to take the basic chemistry of MOFs and move it more in to the materials domain – try and sort of bridge the gap between basic science and an industrial relevance.’

To make that journey into the realm of materials science, Bennett and his colleagues looked to a family of MOFs – zeolitic imidazole networks (ZIFs) – that resemble the structure of the porous, aluminosilicate mineral zeolite. By heating the crystalline ZIF to 573K at a controlled rate of 5K/s to carefully avoid it decomposing, the team found the framework melts into an amorphous liquid state. Further heating to over 800K, produces a highly ordered crystalline state that can be re-melted. When the liquid MOF state is quenched, it is transformed into a hybrid glass.

‘The very fact that MOFs melt in the first place is incredible,’ says Bennett. ‘People are very surprised by this because usually they should burn up and decompose.’

The team believe such a finding will open up a world of designer glasses that exploit the chemical diversity of MOFs. ‘One of the greatest problems industries has with making glasses is [they] only incorporate a very limited amount of chemical functionality,’ comments Bennett. ‘This is a method to get not only inorganic elements into glasses, but also organic at the same time.’

Andrew Goodwin, a materials chemist from the University of Oxford, UK, who was not involved in the work, agrees that amorphous MOFs will allow researchers to play with them in a way that has never been possible. ‘The idea that you might be able to melt a MOF allows really for casting,’ he says. ‘You might be able to work with MOFs in the way that you would actually design other sorts of glassy systems.’

But, for François-Xavier Coudert, a physical chemist who specialises in porous materials at CNRS in France, the interest lies in its possible impact on the fundamental chemistry of MOFs. ‘The results have important fundamental implications,’ Coudert tells Chemistry World. ‘Making metal–organic framework as liquids, it’s a totally new state of matter that becomes accessible in addition to the traditional solid MOFs.’