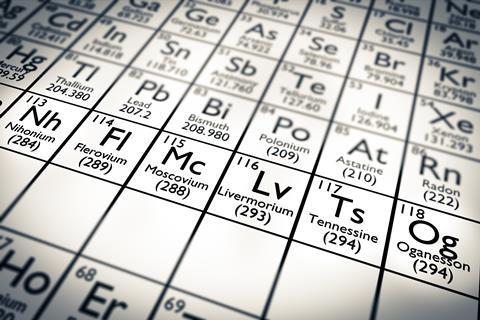 ‘Flerovium might not belong [where it currently sits in the periodic table], so in other words Mendeleev’s table is no longer true,’ says chemist John Despotopulos. His team at Lawrence Livermore National Laboratory, US, wants to capture the superheavy element in a molecular cage to finally settle questions about its chemical nature.

Only about 90 atoms of element 114 have ever been made, but these were sufficient to spark a debate over whether it really belongs in group 14, the same group as carbon, silicon and lead. Elements within a group should show similar properties and reactivity. ‘But once you hit element 114, that’s where predictions start to deviate, that’s where elements start to not behave like you would expect,’ says Despotopulos.

Surface adsorption experiments have been inconclusive: some results indicate that flerovium is as volatile and unreactive as radon, others seem to show that it behaves more like mercury. Now, Despotopulos, who presented his work at the American Chemical Society’s spring meeting in New Orleans, wants to use simple organic chemistry to understand superheavy element’s true place in the periodic table.

His team is designing thiacrown ethers, carbon–sulfur rings designed to pull metals into their central cavity. These cage molecules can form complexes extremely fast. This is just as well, as flerovium’s longest-lived isotope sticks around for a mere three seconds. The rate at which the extraction happens depends on the metal. Comparing flerovium’s reactivity with that of other elements will give the researchers clues as to what metal it is most similar to. If the team manages to capture flerovium, it will be the first chemical reaction ever observed with element 114. 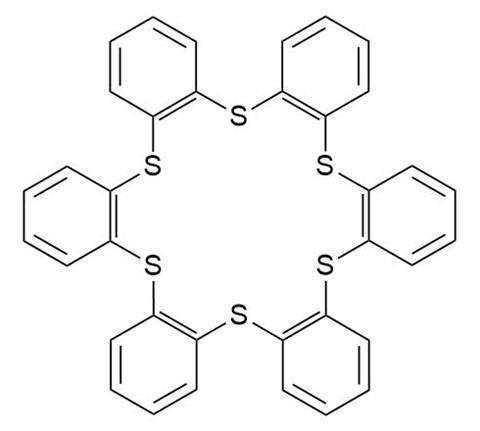 This fully aromatic thiacrown ether is the most promising candidate for capturing flerovium.

However, flerovium is tough to make – accelerators produce it at a rate of one atom per week – so there’s no wasting it. To test how well different sulfur cages can distinguish between metals, Despotopulos’s team has been working with flerovium’s actual or suspected homologues: radioactive isotopes of lead, tin and mercury. Their most promising candidate, a fully aromatic crown containing six sulfur atoms , also proved the hardest one to make. ‘We just haven’t made enough of it yet [to test it],’ Despotopulos says. ‘It’s so bulky, the pieces just don’t want to come together.’

‘But even if we had the right crown tomorrow, it would still take a couple of years to get enough studies with the homologues to justify to an accelerator facility to give us beam time long enough to do studies with flerovium,’ Despotopulos adds. As a first step, he hopes to start experiments with copernicium (element 112) within a year’s time.

As to why researchers go to so much trouble for an element that there’s unlikely to ever be more than a handful of atoms of: ‘Traditional theories indicate that [superheavy atoms] shouldn’t exist at all, but they do. So there is some interesting insight to be gained about the properties of matter, why matter exists.’