Molecular ratchet made from only 26 atoms rotates in one direction

A new molecular motor consumes chiral fuel to drive rotation in one direction around a single covalent bond. The 26-atom machine is powered by a catalytic reaction and mimics aspects of biological processes.

While researchers have previously made a host of different molecular motors, until now none were capable of autonomous 360° rotation in one direction around a single bond. The device was created by researchers from David Leigh’s group at the University of Manchester, UK. 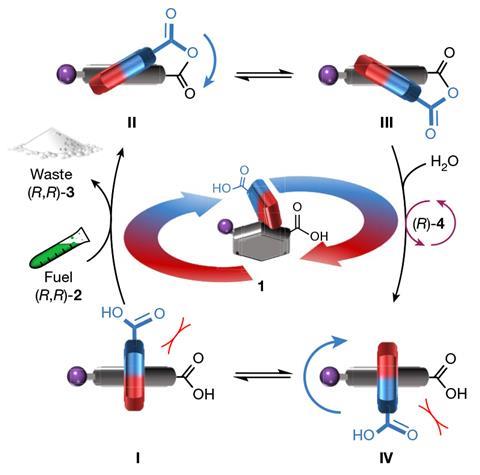 The molecular machine’s rotor (blue/red) moves around the stator (grey) and is locked into position through anhydride formation (II) driven by chiral carbodiimide fuel (R,R)-2. A chiral hydrolysis catalyst (R)-4 then releases the rotor so it can return to its initial configuration

In the presence of a carbodiimide fuel, the motor’s pyrrole-2-carbonyl group rotates around the N–C bond, connecting it to the phenyl-2-carbonyl section of the molecule. The process is driven by continuous intramolecular anhydride formation and hydrolysis reactions, with the directional bias determined by the chirality of the fuel and an additive that accelerates the hydrolysis step.

The motor rotates at a speed of around one rotation every three hours, and makes a mistake in direction every three or four turns. However, the researchers behind the work hope that their device’s structural simplicity will enable future designs with faster rotation and fewer errors.