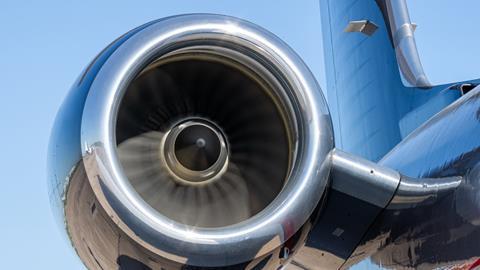 An inexpensive and efficient new catalyst for turning carbon dioxide into jet fuel has been developed by a team led by University of Oxford chemists. The researchers say the process could lead to an industrial-scale method of extracting the gas from the air and reusing it in jet engines, thereby mitigating the warming effects of atmospheric carbon dioxide. 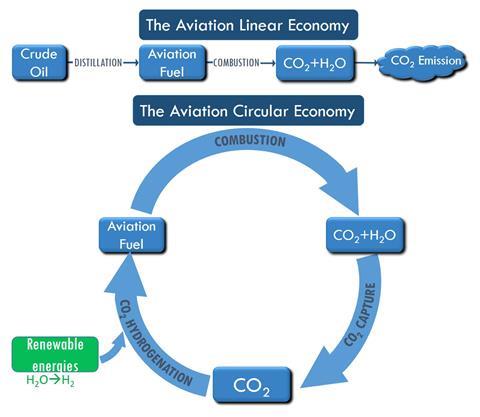 ‘Because CO2 is extracted out of the air and is emitted again when you fly, the overall effect is a net-zero CO2 emission flight,’ the authors said. ‘Instead of consuming fossil crude oil, aviation fuel can be produced from CO2 and renewable energy.’

Study co-author Peter Edwards, head of inorganic chemistry at Oxford, says the researchers plan to use the process to make fuel for existing jet engines within ‘two to three years’. They are also looking for an industrial partner to develop it, he said.

The study details a catalyst that can simultaneously perform two critical stages of a hydrogenation process for carbon dioxide that form the long-chain hydrocarbon fuels used in jet engines – usually kerosene refined from fossil fuels, with a typical chain length of between eight and 16 carbons. Synthetic jet fuels have been made by reacting syngas – a mixture of mostly carbon monoxide and gaseous hydrogen – over an expensive cobalt-based catalyst in a hydrogenation process called Fischer–Tropsch synthesis. But most Fischer–Tropsch methods require a further step to first reduce carbon dioxide to carbon monoxide, and they have poor selectivity – a measure of how targeted the process is for producing hydrocarbon chains of the desired length.

In contrast, the new catalyst is based on iron – an abundant and inexpensive element – with manganese and potassium, and can produce long-chain hydrocarbons in a single step from carbon dioxide with relatively high selectivity. ‘[The] catalyst shows a CO2 conversion of 38.2% and selectivity to C8–C16 hydrocarbons of 47.8%,’ the researchers write, with correspondingly low selectivity for methane and carbon monoxide. That’s comparable or better performance than alternative Fischer–Tropsch catalysts, many of which are made from expensive materials or need large amounts of water to prepare.

Tests with the catalyst using a laboratory source of carbon dioxide and hydrogen in a reactor at 350°C, produced several grams of long-chain hydrocarbon fuel. At the same time, the process generated useful amounts of petrochemicals, such as light olefins, that are usually obtained by refining crude oil.

Edwards says the next stages will be to extract the carbon dioxide directly from the air, and to scale it up so usable amounts of jet fuel can be made from ‘green hydrogen’ in plants powered by renewable energy.

Ultimately, about 4.7kg of atmospheric carbon dioxide – that’s roughly the carbon dioxide generated by a car driving 20km – could be turned into one litre of jet fuel with the new catalyst, Edwards said. He called the development arguably the most important advance in his four-decade career. ‘[Co-author] Tiancun Xiao and I started thinking on this a decade ago,’ but they needed innovations in catalyst design from lead author Benzhen Yao to finally make it happen, he says.

The study is also one of the last papers co-authored by the renowned chemist and former director of the Royal Institution John Meurig Thomas, who died in November.

Aerodynamic engineer Joris Melkert, who studies aviation fuels at the Delft University of Technology in the Netherlands, says the work is an important step as ‘it will help in making the aviation sector more “circular” and thus carbon-neutral’. While methods of producing synthetic jet fuel from carbon dioxide are already known, until now they have been significantly more expensive than kerosene from fossil sources and long-chain biofuels, he says. ‘Anything that can make this process more efficient and cheaper can contribute to make it more viable.’

Chemical engineer Joshua Heyne at the University of Dayton, US, who investigates sustainable aviation fuels for authorities like the Federal Aviation Administration, the US Air Force and Nasa, called the new study ‘promising’, but still at an early stage. ‘This is the type of work we need a lot of as we move to a more sustainable aviation transportation model,’ he said.

Synthetic fuels produced by Fischer–Tropsch facilities are usually expensive, and they face competition from fuels made from biomass, such as purpose-grown crops or household waste. These feedstocks typically start higher up the ‘thermodynamic ladder’ than carbon dioxide, Heyne adds.