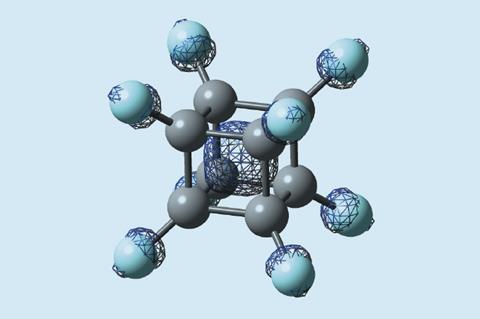 Researchers in Japan have made perfluorocubane for the first time. When reduced, the molecule can hold a single electron inside its box-like structure – an unusual, real-life example of the quantum mechanical ‘particle in a box’ principle.

Although regular cubane (C8 H8) has been known since 1964, nobody had managed to make perfluorocubane (C8 F8) despite predictions that it may be able to hold an electron . ‘Putting an electron inside a carbon-made cage has been a challenge for a long time,’ says Midori Akiyama from the University of Tokyo. ‘Theoretical chemists have predicted that if a polyhedral hydrocarbon is fully fluorinated, it would hold an electron at the centre of the cage. ’ Her team has now become the first to synthesise fully fluorinated cubane, proving that it can indeed encapsulate an electron inside the cage.

The researchers started with a cubane monoester and reacted it with fluorine gas in the liquid phase, resulting in an almost fully fluorinated heptafluorocubane. Craig Williams, an expert in synthetic cubane chemistry at the University of Queensland, Australia calls this approach ‘audacious’ as it relies on elemental fluorine. ‘Heptafluorination then opened the flood gates enabling mild decarboxylation and final monofluorination [to create octafluorocubane],’ he explains.

When reduced, the molecule forms a radical anion with an unpaired electron located within the cubic cavity. The fully fluorinated structure has a very different charge distribution to regular cubane due to the larger size, and greater electron density and electronegativity of fluorine compared with hydrogen. The carbon–fluorine σ antibonding orbitals create a stabilised vacant orbital inside the cage that can accept an electron. This uncommon property is unlike that of other electron acceptors that localise extra electrons on their surface.

Phillip Eaton  at the University of Chicago, US, who first synthesised cubane, remarks that ‘the synthesis and complete characterisation of octafluorocubane and its incredible “inside-the cage” radical anion will delight lovers of symmetry, provide new cubanes with properties quite different from the known hydrocarbon, and challenge calculationalists to match predictions to actual measurements’.

Perfluorocubane’s unusual features of may prove important for studying quantum confinement in molecules, explains Fabio Pichierri from Tohoku University, Japan, who has done theoretical studies on substituted cubane and hypercubane. ‘The synthesis of perfluorocubane is an important breakthrough for science because its anion represents the practical realisation of the particle in a box model described in textbooks of quantum mechanics.’ Picherri also explains that it may now be possible to create ‘perfluoro-dodecahedrane (C20 F20) which, according to theoretical calculations, is predicted to have an electron affinity twice as large that of C8 F8’.

While the radical anion is unstable and of limited practical use, fluorinated cubane derivatives have potential for applications in functional organic materials and polymers . Eaton says he could imagine preparing rod-like cubane polymers or even ultra-thin nanothreads ‘by ring-cleavage and polymerisation of octafluorocubane at very high pressure in analogy to the behavior of cubane’.