UK-based researchers have devised a waste-free approach for oxidising alkenes to epoxides, in which atomic oxygen and carbon monoxide are both generated from carbon dioxide using non-thermal plasma. The method comes from a fairly unusual collaboration between organic chemist Benjamin Buckley and plasma scientist Felipe Iza, both at Loughborough University, and may help unlock the potential for using plasma chemistry within organic synthesis.

Epoxides are important intermediates and building blocks for synthesising many products, including pharmaceuticals. Peroxy-acids such as meta-chloroperoxybenzoic acid (mCPBA) are often used as an epoxidising reagent, but are linked to poor atom economy and halogenated waste products. ‘We would like to use small molecular oxygen donors to react with alkenes but in most cases, they lack the required reactivity,’ says Buckley. ‘On the other hand, plasma can generate reactive atomic oxygen from small molecules such as O2 and CO2, resulting in an epoxidation process that eliminates the oxidant waste stream.’ 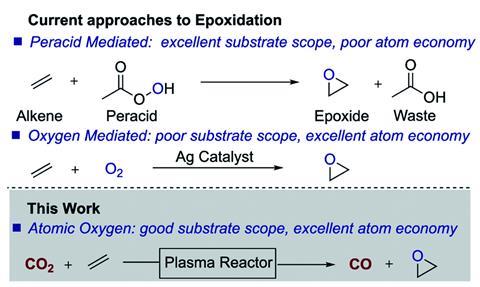 Peroxy acids are often used to drive epoxidation reactions, which leads to processes with poor atom economy and halogenated waste streams. A new process uses CO2 as a waste-free terminal oxidant for oxidising alkenes to epoxides. Simultaneously, it yields CO

Nonthermal gas plasma has previously been used as an effective technology for splitting CO2, as well as molecular oxygen, and holds some advantages over electro- and photochemical processes. ‘Low temperature plasmas, as the one used in this work, are ionised gases containing cocktails of electrons, ions, radicals, excited species and photons under conditions that are far from thermodynamic equilibrium,’ explains Iza. ‘This means that these plasmas can generate very reactive environments to initiate and catalyse chemical processes at temperatures much lower than those needed in conventional thermal processes.’

A major drawback of using plasma has been it typically requires a vacuum, which is incompatible with the vapor pressure limitations of liquid compounds. However, low-temperature plasmas that operate at atmospheric pressure are now available.

During the process, atomic oxygen produced from the CO2, reacts with the alkene substrates to form epoxides. The oxygen is reactive enough that the reactions can take place under mild temperature and pressure, and without using catalysts or co-reagents.

As the atomic oxygen reacts with the alkene in the epoxidation process it cannot then recombine with CO. This boosts the yield of carbon monoxide, which can be used for numerous further applications.

‘Plasma technology is gaining increasing interest for CO2 conversion, and this is a very innovative approach to not only produce CO, but also to use the created oxygen atoms as green oxidants, to create other high-value products,’ comments Annemie Bogaerts, a plasma chemistry expert at the University of Antwerp, Belgium. ‘At the same time, this approach avoids recombination of oxygen atoms with CO into CO2 again, which otherwise limits the overall CO2 conversion.’

‘We are interested in a range of oxidation processes and how this particular proof-of-principle approach can be scaled up, converted to continuous flow and applied to industrially relevant issues,’ adds Buckley. ‘The use of plasma for synthetic purposes is an emerging field and one that will continue to grow as more plasma physicists and organic chemists work together and devices and know-how become available to the synthetic chemist.’