A polyatomic molecule – calcium monohydroxide – has been trapped and cooled to almost absolute zero for the first time. The work could help to pave the way towards studying interactions between individual, ultracold molecules.

Scientists have recently demonstrated cooling diatomic molecules such as strontium monofluoride in magneto-optical traps. Polyatomic molecules, however, have proven to be more challenging. This is because laser cooling requires researchers to tune the photons’ wavelength to the electronic transitions of the target molecule. As polyatomic molecules have a much more complex energy landscape, they are more difficult to target than their simpler counterparts. 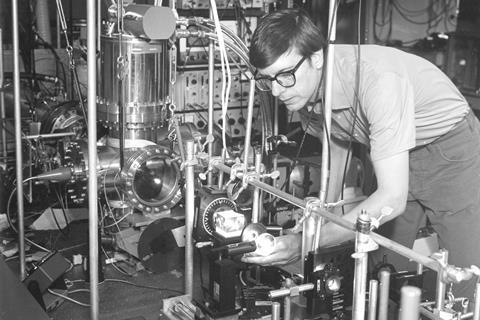 In the 1980s, cooling sodium atoms to around 20mK was a breakthrough. Now, polyatomic molecules can be cooled to an order of magnitude lower temperatures. This photo is of William Phillips who later shared the Nobel prize for inventing laser cooling

Despite this, polyatomic molecules’ rotational and vibrational degrees of freedom makes them suited as platforms for quantum computation. Working at ultracold temperatures also allows scientists to observe the non-classical interactions between molecules that inhabit only a small number of quantum states.

The team suggests that it may be possible to lower the molecular temperature even further. At such temperatures, the molecules could be loaded into regular optical traps to study interactions between individual molecules. The team hopes that this work can act as a proof-of-concept for trapping even more complex molecules such as calcium monophenoxide.