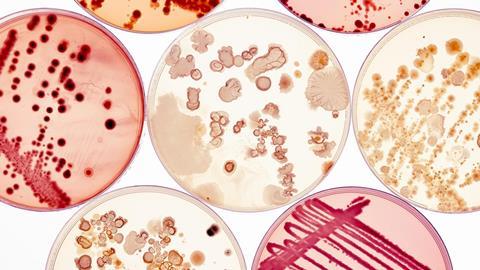 The precise way in which teixobactin, the first promising new antibiotic in decades, kills bacteria has been unravelled. This discovery will help pave the way for further optimisation of this compound and ultimately it’s use in patients. 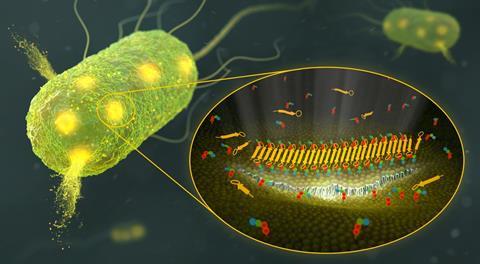 Teixobactin is the first member of a new class of antibiotic discovered in 2015. Research shows that it kills bacteria by targeting a lipid unique to bacterial cell walls

Teixobactin was discovered in 2015 when a new method to culture previously unculturable bacteria was developed. Since then, the antimicrobial effects of the compound have excited researchers and clinicians around the world. While the killing power of teixobactin had been observed it was unknown exactly how the compound, isolated from the soil bacterium Eleftheria terrae, accomplished this task.

Researchers have now revealed that the target for teixobactin is a peptidoglycan called lipid II that is essential for building bacterial cell membranes. Importantly, lipid II is only found in bacteria meaning teixobactin is not toxic to eukaryotic cells. While investigating the interaction between teixobactin and lipid II using solid state NMR, Markus Weingarth, an associate professor at Utrecht University, saw something unexpected.

‘Initially we thought we could answer all the questions with solid state NMR,’ Weingarth says. ‘It was only after a while that we realised, hey, it actually forms these supramolecular structures.’ This led Weingarth and collaborators from Europe and the US to employ several different techniques alongside NMR, from confocal microscopy to atomic force microscopy, to visualise this process at multiple length and time scales.

‘What we observed is, it is critical for this antibiotic upon target binding to form these large supramolecular structures,’ explains Weingarth. ‘Only these huge supramolecular structures are able to damage the membrane.’ Digging deeper into this supramolecule structure the team observed fibrils and saw that they led to the formation of anti-parallel β-sheets bridging multiple teixobactin molecules bound to the bacterial membrane. This new supramolecule, complete with fibrils, provides the killing power of teixobactin by physically displacing phospholipids in the membrane, ultimately leading to cell death.

In fact, teixobactin employs a two-pronged attack. While destroying the membrane it also sequesters lipid II, depriving the bacteria of this essential molecule. Another discovery was the role of an incredibly rare amino acid residue which resides on the end of the teixobactin scaffold.

‘[Enduracididine] is a rare residue that had only been encountered three times in nature,’ says Weingarth. It resides at the C-terminal headgroup of teixobactin and it binds tightly to the pyrophosphate-sugar moiety of lipid II. Simultaneously, the N-terminus interacts with a pyrophosphate of another lipid II molecule, and it is this configuration that favours the formation of the β-sheet fibrils.

Po-Chao Wen, a research scientist at the Beckman Institute for Advanced Science and Technology at Illinois, acknowledged the complexity of the problem and the need for a broad approach. Adding that while the results are somewhat expected, some questions remain regarding differences in the binding stoichiometry reported in this work and previous studies. ‘Perhaps it has to assume some non-homogeneous complex formations, i.e. non-uniform teixobactin/lipid II interactions among the oligomers/polymers.’

‘Now, with the structure and knowledge of supramolecular mode of action, we can now start to rationally modify teixobactin in order to improve on its pharmacokinetics,’ says Weingarth. ‘This enables, or facilitates now, medical chemistry to rationally improve the characteristics of the drug.’