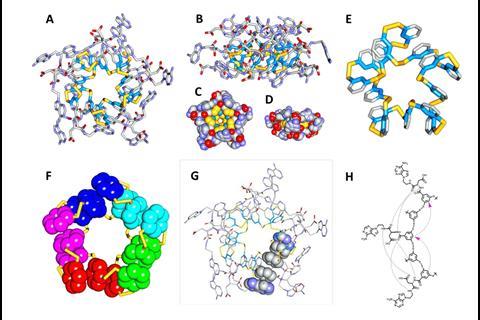 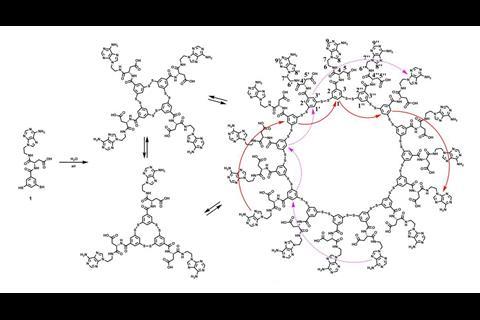 The self-synthesising macrocyclic foldamer has a complex and unprecedented secondary and tertiary structure, that constructs itself from 15 identical peptidenucleobase subunits, using a dynamic combinatorial chemistry approach

Scientists have made abiotic proteins – synthetic molecules that, like their biological counterparts, assemble into large folded 3D shapes held together by non-covalent interactions. The study shows that simple compounds can spontaneously form complex structures, which could be relevant to understanding the origin of life on Earth.

Proteins are more than the sum of the amino acids they’re made up of. Their biological function depends on their three-dimensional shape. At best, misfolding can make a protein inactive. But at worst, it can lead to diseases such as Alzheimer’s or Parkinson’s.

How a simple amino acid chain folds into an intricate 3D shape is still a matter of scientific debate. But scientists are trying to go beyond the constraints of using amino acids as building blocks and find synthetic molecules that assemble and fold into specific shapes with specific functions.

All their peptide-nucleobase needs is a saltwater solution to form a 15mer macrocycle in 95% yield. The 75-atom ring folds into an intricate twisted shape, with a hydrophobic core and hydrophilic surface – just like a protein.

Disulfide bridged, hydrogen bonds and aromatic ring stacking interactions hold the foldamer together and give the ring its coiled secondary structure. The macrocycle also has a tertiary structure created by five stacks of three aromatic rings that arrange themselves in a tiled fashion.

Although the building block molecule needs a nucleobase part to form macrocycles, it could accept various types such as adenine or guanine. The researchers are now exploring how modifying the monomer structure changes its self-assembly and folding behaviour for example to make bigger or smaller rings. They hope this will help them to design bespoke folded structures.