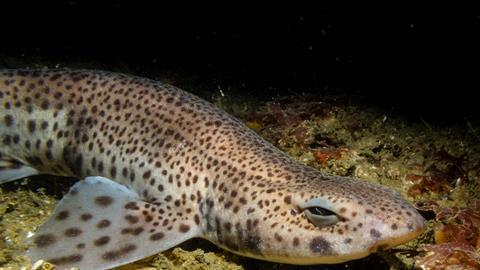 The tooth-like scales on a shark’s skin show signs of reaction-diffusion molecular patterns, like human hair and chicken feathers

The mark made on Earth’s life forms by chemical patterns described by computing pioneer Alan Turing goes so deep it might even be seen in sharks’ strangely tooth-like scales. Gareth Fraser from the University of Florida, in Gainesville, US, and his team have shown that the proteins that control feather shape in chicken embryos may also position the structures known as ‘denticles’ that make up shark skin. Their data suggest that vertebrate appendages like these and even the hair of humans ‘all share a common developmental program’, Fraser tells Chemistry World. 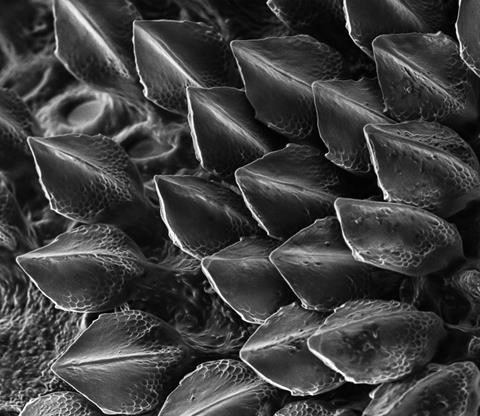 Shark scales, known as denticles, are made of the same material as their teeth

Turing’s reaction-diffusion model describes how ‘morphogen’ substances of two types can diffuse and interact. Activators turn production of both morphogen types on, but only have that effect at short range. Inhibitors turn activators off, and have that effect over longer range. Under the right conditions they form stable patterns with regions containing high concentrations of just one morphogen. These regular patterns can shape biomaterials and the gaps between them, potentially explaining how we get fingers, for example.

Fraser’s group had been studying denticles, which are made of the same material as shark teeth but form on their skin, but didn’t know how they appeared. After mathematical modelling suggested a Turing-like system, they investigated which proteins might be involved. They looked at a protein known as fibroblast growth factor 4 (FGF4), an activator in the development of birds’ feathers. This involved surgically implanting beads carrying a small-molecule FGF4 inhibitor into shark embryos.

The team collected the embryos in North Wales, Fraser having worked at the University of Sheffield before his recent move to Florida. ‘Sharks develop inside an egg case, commonly known as a mermaid’s purse,’ says PhD researcher Rory Cooper. After a couple of months the egg case naturally opens, allowing scientists to experiment on the embryos, implanting the beads. 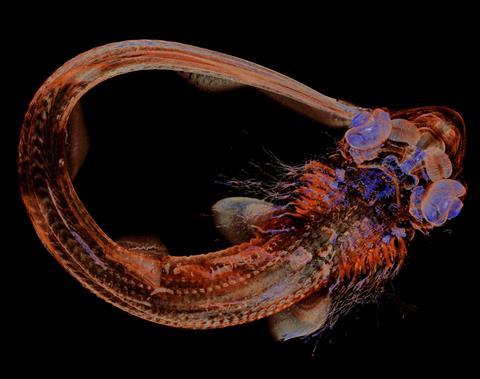 A catshark embryo. Researchers investigated the effect of the protein FGF4 on the development of skin denticles

‘The weakness of the Turing system is the same as its strength – it can mimic so many different natural patterns that to be more useful it needs to be constrained by experimental observations,’ comments Denis Headon from The Roslin Institute in Edinburgh, UK. However, he adds that in this study the scientists ‘nicely provide a framework for delving further into the context of such systems in a vertebrate lineage that has received little attention to date’.