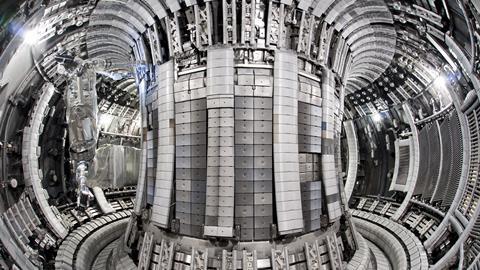 An agreement between the UK and European commission will guarantee the future of the Joint European Torus (Jet) nuclear fusion facility in Oxfordshire, regardless of the UK’s Brexit plans.

Both parties have signed an extension to Jet’s contract that secures an additional €100 million (£86 million) of EU funding over the next two years and ensures the continuation of research until the end of 2020. The future of Jet has been uncertain for some time following the result of the UK referendum, especially as, when it leaves the EU, the UK is due to pull out of Euratom – the organisation that coordinates nuclear research around Europe, including work at Jet.

The contract will enable the facility to push ahead with planned fusion tests in 2020, and offers job security for its staff of more than 500. It also contains the option to extend operations until 2024, a measure which may be necessary in the run-up to the new international experimental fusion reactor Iter in southern France, which is planned to open in 2025.

The UK’s science minister Chris Skidmore said the agreement was ‘great news’. ‘Extending this contract means cutting-edge and world-leading fusion research can continue in this country, which I know will be a welcome reassurance to the hundreds of workers at Culham,’ he said in a statement. ‘Science has no borders and as we leave the EU, this kind of international collaboration remains at the heart of our modern industrial strategy to maintain the UK’s position as a world leader in research and innovation.’