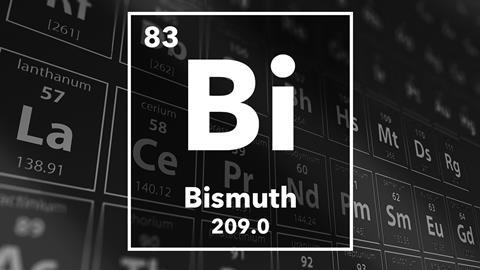 Hello! This time we're turning to the tale of the element that held the key to masking a sun tan, provided engineers with safety valves for their boilers, could make spoons vanish in a hot cup of Victorian tea and continues to cure stomach upsets today. With the story of this remarkable metal, here is Andrea Sella.

bismuth, A few months ago I was struck by a mad but irresistible impulse to cast a bell. A friend of mine lent me a template and I headed out to Tiranti, one of the best sculpting supply shops in London. With an inviting blue entrance, the shelves are cramped with bottles and tins of resins, polymers and initiators. There are tubs of clay anatomical models, trays of weird implements and books that explain how to make silicon moulds of your extremities. I explained to the young woman behind the counter what I wanted to do and she took me to the silicon resin section where she selected some bottles. I was about to pay for my goodies when my eye was drawn to the next shelf. Stacked in neat piles were clear plastic bags of shiny metal slabs. I picked up a pack and was immediately struck by the weight. Bismuth, the woman said, it casts really well and it's a lot less toxic than lead. I left the shop with a bag of that as well. 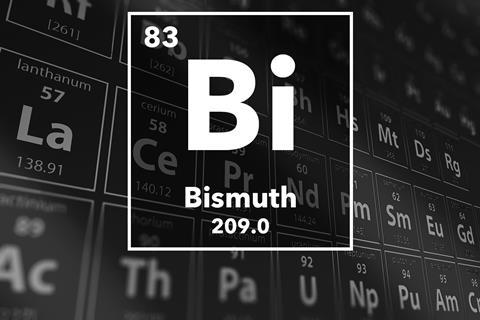 Periodic table of the elements – 83 – Bismuth

Bismuth is without doubt a heavy metal; It occurs so low in the periodic table many were puzzled by the fact that it didn't seem radioactive. In fact its major isotope Bismuth 219 was predicted to be so back in 1949. But it wasn't until 55 years later, when the French physicists finally observed its decay. It has a half of life of 2x1019 years, I would round off as the same as eternity so. The density of the metal is 9.8, little less than lead but like water, the solid expands as it freezes and it floats on the liquid. It can melt quite easily and it can grow stunning little ziggurat like crystals by cooling it slowly from melt. It is easy. Heat some Bismuth in an iron ladle or porcelain bowl using a sand bath and a Bunsen burner until it melts. This happens at just 271 degree Celsius. Then turn OFF the burner so that the metal cools very slowly and when the metal freezes over at the top poke two holes in the solid surface and then pour out the remaining liquid and then leave everything to cool at room temperature. If you now break open the metal mass you will find gorgeous stepped cubes of Bismuth with a faintly pink iridescent sheen to them, a colour which arises from the thin layer of oxide that coats the metal. Just be careful, the metal is quite brittle and your precious cubes will shatter if dropped. 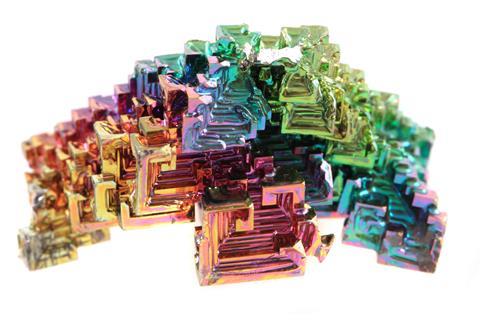 Bismuth itself is not very reactive; it is sometime found in ore deposits as the native metal. But surprisingly there is little evidence that it was known to the ancients. Aristotle doesn't list it among his seven metals and Pliny is silent on the matter. Only the Incas seem to be aware of it. The handle of a llama-headed knife found at Machu Picchu is fashioned from a bronze which is 18% Bismuth, which sounds like rather more than an accident. Reliable description of Bismuth only appeared in Europe in the 15th Century. It began to be mined in Schneeberg around 1460 and the metal soon started to be used as a kind of silvery ink or pigment which gave rise to a craze called Wismuth Malerei, Bismuth painting. Painters in Italy including Raphael used both Bismuth metal and Bismuthinite, Bismuth trisulphide in their work. But what was it the alchemist Basil Valentine rather confused things by calling it Wismut, White lead. Others thought it was a kind of tin, Stannum Glaciale or étain de glace, icy tin which the French chemist Nicolas Lemery said sniffily in 1697, was just a derivative of tin prepared by the English. Eventually however the mists cleared. And by early 19th century, John Dalton listed it amongst his atomic symbols as a circle around a capital letter B. Only then was its chemistry systematically explored particularly by the Swedish chemist Berzelius. For example if you dissolved Bismuth in Nitric acid and then poured the solution into water a brilliant white flaky material precipitates, Pearl white, the basic nitrate which from the 18th century was used in cosmetics to whiten the complexion, anything not to look like someone who worked in the sun. French druggist called it blanc de Perle. It had one disadvantage, however. In polluted cities, it had a tendency to pick up sulphur from the air turning the wear a rather bizarre browner shade. But because of its basic properties, the nitrate began to be given for upset stomachs often when mixed with milk of magnesia. Eventually this was superseded by its complex with salicylic acid, that pink sloth called pepto-bismol, a clever combination of a weak inorganic base and an organic anti inflammatory.

But Bismuth's role in metallurgy has us always intrigued. It has been used extensively to make low melting alloys being added to Pewter, the alloy of lead and tin to adjust its melting point or to antimony to make type metal, once used in printing presses. Alloys containing bismuth were used for safety valves and boilers, melting if the temperature rose too high and a classic prank invented in Victorian times was to cast spoons from an alloy containing 8 parts Bismuth, 5 parts lead and 3 parts tin. Its melting point is low enough for the spoon to vanish into a cup of hot tea to the astonishment of the unsuspecting visitor. So what am I going to do with my Bismuth ingots, perhaps I'll cast a few spoons before I have a go at the bell.

Budding chemist and would be campanologist, Andrea Sella. Next time to the element that gives rise to a girl's best friend, but ladies just know where it really comes from first.

It is possible to make any carbon based material into a diamond including hair and even cremated remains. Yes you can turn your dearly departed pet into diamond if you want to. These artificial diamonds are chemically and physically identical to the natural stones and they come without the ethical baggage. However psychologically there remains a barrier, if he really loves you, wouldn't he buy you a real diamond.

Indeed and Katherine Holt would be explaining why diamonds really are forever on next time's Chemistry in its element. I do hope you can join us. I'm Chris Smith thank you for listening and good bye.