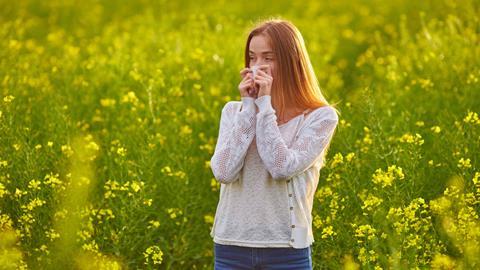 The root and branch of pollen allergies

This week, get your tissues at the ready - well 20% of you anyway - as it's that time of year. Explaining more, it's Phil Robinson.

It's the start of summer. The cold, dark winter is finally a distant memory and the sun has got his hat on. You step outside in bare feet for the first time this year, and then stop suddenly. What's that noise? Your neighbour's lawn mower?

If that realisation makes you freeze with fear, and then leg it to the bathroom to rifle through the medicine cabinet, you must be one of approximately 20% of the population that is predicted to suffer from hayfever at some point in their lives.

And the compound responsible for all your suffering? Well that's histamine. 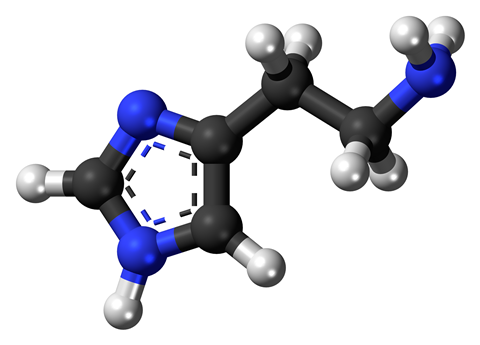 Histamine is an amine that is produced in the body from the amino acid histidine. It is then either rapidly broken down or stored until needed. And yes, I did say needed. Although those of you who suffer from those allergy-induced runny noses and itchy eyes may struggle to agree with me, for the most part, histamine is a 'good guy'.

Histamine plays a vital role in our immune system - it fights off any 'baddies' trying to infiltrate our body and so it's stored in the cells of 'high-risk' areas like the nose and mouth and also in our blood. Its release from the storage sites into the body is triggered by an antibody called immunoglobulin E. And the release of this antibody is in turn triggered by an invading bacteria or virus, or in the case of hayfever: pollen. Histamine's role in the immune response is to promote inflammation by increasing blood flow to the affected area and allowing fluid (and the infection-fighting cells it contains) to seep out of the blood vessels into the surrounding tissue. So when pollen appears in the nose of a hayfever sufferer - the blood vessels swell up, the nose gets blocked, and fluid leaks out of it.

Once a response has been triggered, the flood of histamine can reach and bind to one of four different receptors in the body. The H1 receptors are found on smooth muscle tissues, in blood vessels, in the heart and in the central nervous system. And it is excess activation of this receptor that causes the symptoms of allergies such as hayfever. For this reason, traditional antihistamines are H1 antagonists - they block the H1 receptor to stop histamine binding to it. Histamine also acts as a neurotransmitter and the neurons that release histamine are closely linked to the feeling of being awake. Thus, the H1 receptors are also involved in sleep regulation and so blocking them with antihistamines can make us feel drowsy.

Our H2 receptors are mainly located in our stomach, where they regulate gastric acid levels. So while blocking the H1 receptors can offer relief from allergies such as hayfever, it is also possible to block the H2 receptors, to reduce levels of acid in the stomach. Cimetidine, the peptic ulcer treatment developed by Nobel prize winner the late Sir James Black in the 1970s, is an early example of a drug that blocks this type of histamine receptor.

The H3 receptors are found in our nervous system, where they regulate histamine levels throughout the body. Blocking these receptors can offer relief from extreme tiredness, as this action stimulates the H1 receptors and their sleep-preventing activity.

Finally, the H4 receptors are known to control white blood cell release from bone marrow, amongst other things. 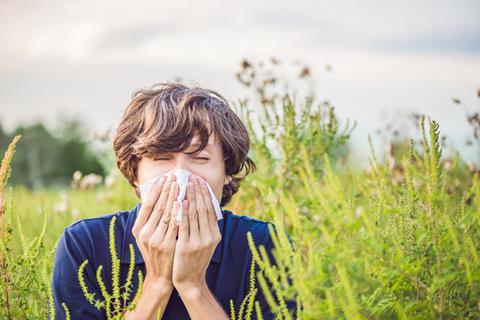 But back to antihistamines - this ability to block the H1 receptors could offer relief from a lot more than just allergy symptoms. In 2008, an antihistamine developed in Russia was shown to raise the practical cognitive abilities of Alzheimer's patients. And in 2009, a second study published in Nature hit the media, showing that a different antihistamine is able to block a receptor involved in Alzheimer's disease.

But histamine isn't just present in humans. It is found widely throughout the animal and plant kingdom, where organisms have evolved defence mechanisms that take advantage of our susceptibility to histamine. In many species of plant, bacteria and insect, histamine is the irritating ingredient in their venom - as when it enters our body it triggers the allergy-like rash and itching we associate with stings and bites.

And it is this reaction that's also involved with histamine's occasional 'bad guy' image in the news paper headlines. Scombrotoxic fish poisoning is caused when bacteria multiply in badly stored fish. The bacteria metabolise the histidine naturally present in the fish, causing a build up of histamine. People who eat fish with these extremely high levels of histamine tend to have an extreme - and potentially life threatening - allergic reaction.

So, histamine: good guy? Or bad guy? You take your pick... I guess your answer will probably depend on your susceptibility to the dreaded hayfever!

Yes, those of you wiping your eyes dry right now may be leaning towards bad guy. That was Chemistry World's Phil Robinson with the allergy-inducing yet protective chemistry of histamine. Next week, prepare for some laughs

The discovery that nitrous oxide could make a party go with a swing is nothing new - its nickname 'laughing gas' dates back to at least 1819, when The Times wrote of 'chymical experiments' where 'laughing gas will be exhibited'. It was used recreationally as early as 1799, well before its use as an anaesthetic, and in the early 19th century laughing gas parties were all the rage. The poet Southey commented 'I am sure the air in heaven must be this wonder working gas of delight'. Groups of people would take turns to sniff at a jar of the gas, collapsing on the floor from dizziness and in fits of uncontrollable laughter. In a buttoned-down age, the sheer lack of restraint brought about by the drug must have been particularly remarkable.

But to find out the more medicinal uses of nitrous oxide - as well as how this compound has such effects on the human body - join Brian Clegg in next week's Chemistry in its element. Until then, thank you for listening. I'm Meera Senthilingam.