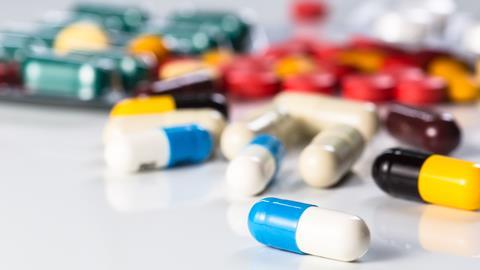 Simon Cotton explains the chemistry behind Vancomycin, an antibiotic used to treat a number of bacterial infections

This week, a compound to cure your ailments. Explaining its chemistry is Simon Cotton.

We've got complacent, as far as disease and infection is concerned. We expect to be able to go along to the doctor and be given a tablet that will be an instant cure. Less than a century ago, minor infections often proved fatal. Then along came penicillin and other antibiotics, and the world of medicine changed. Mass production began in 1943, in time to treat Allied casualties in the invasion of Normandy, and in 1945 Fleming, Florey and Chain shared the Nobel Prize in Physiology or Medicine for their efforts. It was the era of the 'magic bullet'. A new golden age beckoned, when disease would be conquered forever, or so it seemed.

But Fleming, for one, saw danger only too clearly. Almost at the end of his Nobel lecture, delivered on December 11th 1945, he said this:

'There is the danger that ignorant man may easily underdose himself and, by exposing his microbes to non-lethal quantities of the drug, make them resistant.' 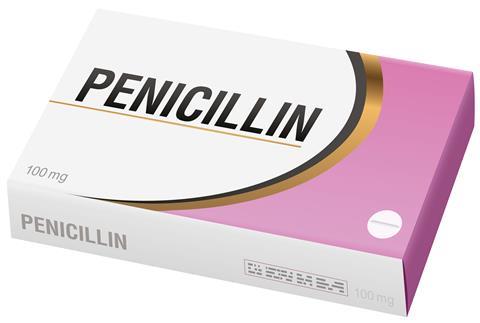 Within a few years of penicillin coming into use, bacterial resistance to penicillin was a fact of life. Some people didn't complete their course of treatment, so that the more resistant bacteria didn't get killed off: the survival of the fittest, if you like. And some people misuse antibiotics; they expect them to treat things they are not designed for, like viral infections. Penicillin won't help you if you've got a cold. Moreover, antibiotics are often given to farm animals for non-medical reasons, as a growth promoter.

Despite developing new types of penicillin, hospitals and doctors were faced with untreatable infections. After the success of penicillin, people searched for other antibiotics in nature. In the 1940s, they discovered the first of the tetracycline drugs, made by soil fungi for their defence. In 1953, a new antibiotic, vancomycin, was discovered in a soil sample from Borneo. Vancomycin is a big molecule, containing over one hundred and fifty atoms and with a formula mass of nearly one and a half thousand. It was found to be effective against resistant strains of bacteria, and came to be regarded as the drug of last resort, reserved for infections resulting from bacteria that are resistant to all other antibiotics. Until the 1980s, vancomycin was rarely used, except for cases like the drug-resistant bacterium MRSA, a major cause of hospital-acquired infections.

Like penicillin, vancomycin stops bacterial growth. It does this by preventing them from building their cell walls. These have to be strong, to resist the osmotic pressure of the contents, so the sugar molecules that make up the cell walls have to be cross-linked by short peptide chains. Vancomycin attaches itself to the last two amino acids at the end of peptide chains, a D-alanyl-D-alanine group, by forming five hydrogen bonds to them. This stops the crosslinks from forming. Penicillin works differently, binding to the enzyme that controls the crosslinking reaction. Someone once said that penicillin was a saboteur of the cell-wall building machine, whilst vancomycin was a protester that sat in its way. 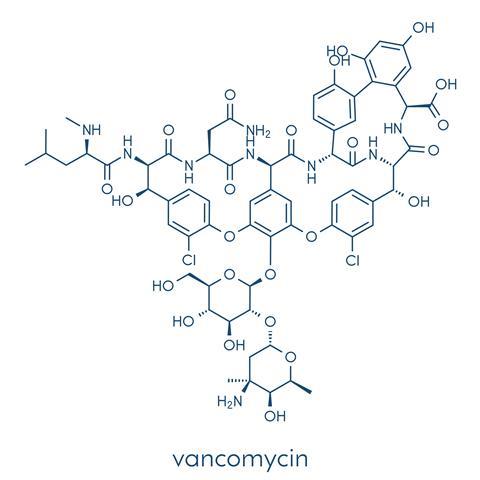 Sadly, there are now some bacteria that are resistant to vancomycin, including some forms of the MRSA bacterium. These have different terminal amino acid terminal units, with D-alanyl-D-lactate instead of D-alanyl-D-alanine. An N-H group has been replaced by a carbonyl group, meaning that vancomycin can only form four hydrogen bonds to it, whilst extra repulsive lone-pair interactions also occur. This may not sound much, but this means that the binding to vancomycin is a thousand times weaker, so that vancomycin is now ineffective against these bacteria.

If vancomycin can't be used, the drugs cupboard is bare - unless new antibiotics can be formed.

One answer may lie in modifying the structure of the vancomycin molecule. A team at the Scripps Research Institute in California, led by Dale Boger, has altered the structure of vancomycin, by replacing a carbonyl group by a carbon bound to an NH. In vitro tests show that the modified molecule binds strongly to both normal and resistant bacteria and is effective against both forms. It now remains to be seen if this modification can translate into a real medicine.

In the words of Professor James Hughes of Emory University in America: - 'The stakes could not be higher. Without action, deaths and morbidity from antimicrobial resistance will continue to increase and the drug development pipeline will run dry. There is a moral obligation to patients and to the nation to prevent the unthinkable outcome of a return to the preantibiotic era and to ensure that these precious resources are available for future generations.'

Only scientists can solve this challenge.

Fingers crossed! Birmingham University's Simon Cotton there, with the chemistry of a compound helping in our constant fight against bacteria, vancomycin. Next week, it's time for some healing.

The town of Epsom, in the English county Surrey, is probably best known for its racecourse, but it is also a town with mineral springs and gave its name to a particular substance extracted from them, known as Epsom salts.

According to tradition, Epsom's healing waters were first discovered in the early seventeenth century by a local villager, Henry Wicker, who found a natural spring on Epsom Common to water his cattle on a particularly dry summer. His cattle wouldn't drink the water, but Wicker decided the strong mineral taste of the spring would give Epsom a spa.

What was initially seen as something to produce a purgative drink was soon found to have more pleasant uses.

And you can discover how by joining Brian Clegg in next week's Chemistry in it's element. Until then, thank you for listening. I'm Meera Senthilingam.

(Promo)Chemistry in its element comes to you from Chemistry World, the magazine of the Royal Society of Chemistry and is produced by thenakedscientists dot com. There are more compounds that count on our website at chemistryworld dot org slash compounds. (End promo)