Thermal analysis in the development of long-acting injectable systems

Long-acting injectables (LAIs) are pharmaceutical formulations designed for slow delivery of a drug over a long period of time. The release of the drug is controlled by its carrier system, typically polymers formulated as pre-formed implants, microparticles, or in situ gel-forming implants. LAI systems are used for the treatments of chronic or long-lasting diseases like psychiatric and hormone disorders, cancers and infectious diseases like HIV.1,2

The most commonly used polymer for this purpose is PLGA (poly(lactic-co-glycolic acid)). Biodegradable and biocompatible, PLGA is suitable as a matrix for small molecules and for biomolecules such as peptides and proteins. Depending on the polymer’s chemical composition and the size or geometry of the delivery system, the release rate of the drug can be adjusted on time scales of days to months.3

Risperidone is a psychotropic drug used to treat schizophrenia and bipolar disorders. It is available in different dosage forms, such as tablets, oral solution and as an LAI system of PLGA microparticles. The risperidone LAI is administered intramuscularly every two weeks, with oral supplementation during the first three weeks to cover the lag phase during which no drug is released from the LAI. The antipsychotic therapy goals are met far more frequently with such long-acting medication (89%) than with oral medication (59%).4

However, undesirable non-linear drug release profiles, including burst release and lag times, are frequently observed with PLGA. The drug release profile can be altered by changing the chemical composition of the polymer matrix – for example replacing PLGA with the more hydrophilic polymer PEG-PLGA provides an in vitro linear drug release over one month without a lag phase (Fig 1). 3 The release profile is also dependent upon how the drug is distributed in the polymer matrix (uniformly or as separate domains) and in what form: as discrete molecules, in its amorphous state, or in its crystalline state (forming a molecular dispersion, an amorphous solid dispersion or a crystalline suspension, respectively).5 This is where thermal analysis comes into play. 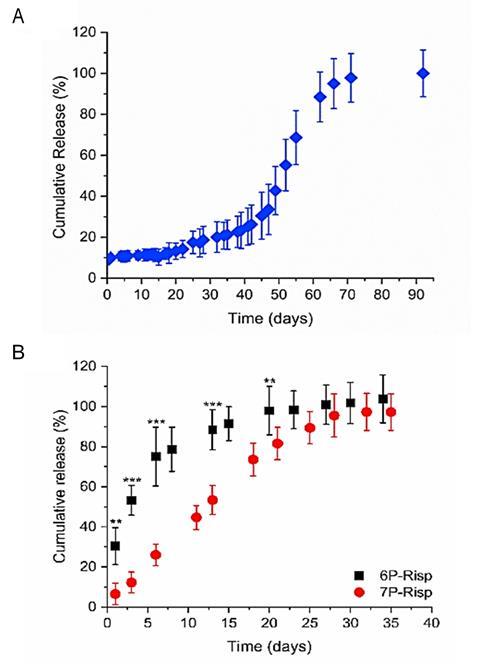 Differential scanning calorimetry (DSC) is a sensitive and reliable technique for determining the solid-state properties of drugs and pharmaceutical excipients. It can be used to determine characteristic values, such as melting points and heats of fusion for crystalline substances, or glass transition temperatures for amorphous or semi-crystalline substances. Changes in these properties, due to such factors as manufacturing processes or interactions between components in formulations, can be quickly and easily detected with DSC. The DSC 300 Caliris® is ideally equipped for such tasks, the only device of its kind with user-exchangeable and interchangeable sensor-furnace modules. 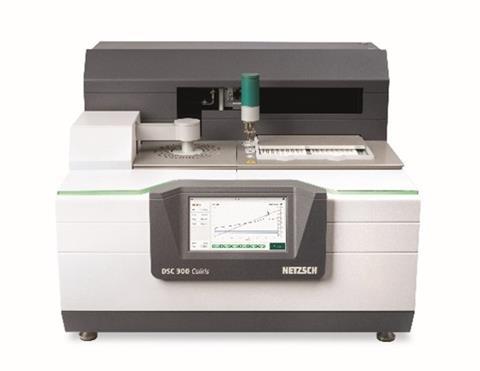 Do the drug and polymer interact?

The change in the solid-state properties of risperidone after microparticles production can be clearly determined by DSC analysis. Figure 2 shows the respective first heating runs of risperidone and PEG–PLGA. Risperidone is a crystalline solid with a melting point of 170°C (extrapolated onset temperature). In contrast, PEG–PLGA (60–85 kDa, 5 kDa PEG, 5% (w/w)) is amorphous and exhibits a glass transition at approximately 38°C. The glass transition is superimposed with a relaxation peak. 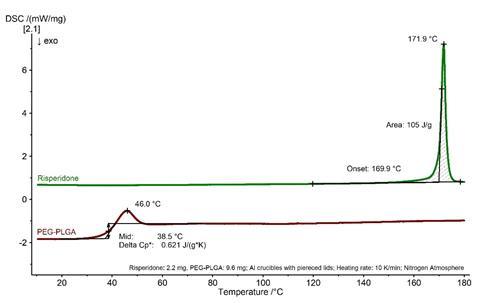 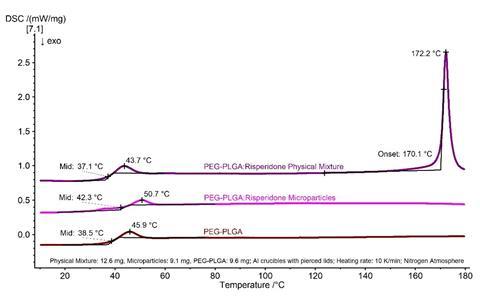 The presence of a crystalline suspension with drug domains can therefore be excluded and the PEG–PLGA:risperidone microparticles must exist as either a molecular dispersion or an amorphous dispersion. DSC is therefore a valuable aid in the development of new drug delivery systems.

Many thanks to Prof. Karsten Mäder, Martin-Luther University, for his support with the sample preparation.