2
Microplastics – A chance discovery leads to a research passion 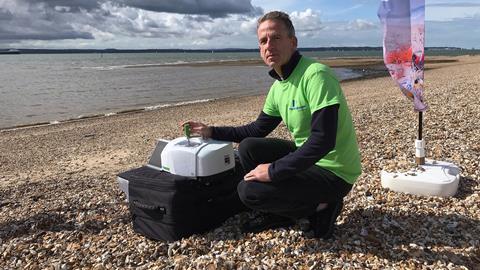 Microplastics – A chance discovery leads to a research passion

Tiny plastics are polluting our waterways, foods and drinks. To understand and combat this contaminant, we need to leverage technologies capable of detecting their presence and understanding their makeup

A chance discovery on a beach five years ago drew me into what has not only become my main field of research but an endeavour that fuels debate on microplastics in bottled water. 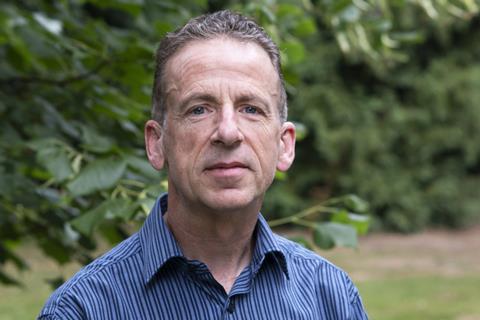 It was during a holiday in Caleta de Famara in Lanzarote, Spain, that I spotted several small, multi-coloured shiny objects washed up on the village’s usually litter-free beach. Curiosity being a cornerstone of scientific discovery, I was intrigued by these particles, so I gathered samples to take back to PerkinElmer’s lab in Seer Green, England.

Keen to detect and characterise the contaminants, my team and I used our Fourier transform infrared (FT-IR) spectrometer to confirm that the particles found on this once-pristine beach were small microplastic fragments. Through this analysis, we also came to understand their chemical composition as a mixture of polyethylene and polyethylene terephthalate (PET) ­– relatively common chemicals prevalent in plastic bottles, lids and fishing nets.

Since that first discovery and in wanting to broaden our knowledge to better help other environmental and food scientists tackle this problem, we have expanded our efforts to analyse microplastic contamination across the globe. For example, PerkinElmer scientists joined the Great British Beach Clean 2018 at Stokes Bay in Portsmouth. The range of plastic waste found included everything from cotton bud sticks and straws, to plastic bottles and lids. Of course, we uncovered plenty of microplastic particles which we tested real-time right on the shore with our portable FT-IR spectrometer. Not only did this give us new data points for our work and our customers, but it also gave the public at the event itself the chance to learn exactly what plastic litter is currently present on their beaches – expanding their curiosity and knowledge about the chemicals affecting their environment. 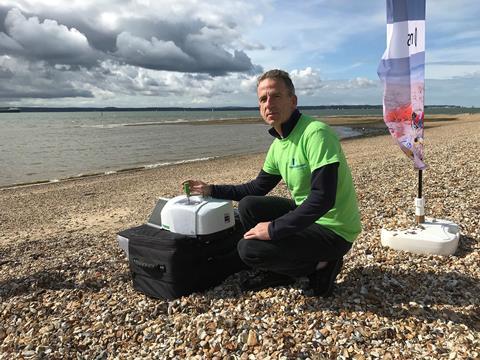 In analysing the particles, we found the same polymers on the UK beaches as those in Lanzarote: a mixture of polyethylene, PET and polypropylene. This confirmed the persistent and widespread nature of plastic contamination and affirmed the need for robust testing methods to monitor it to help secure the integrity of the global food and drink supply chain.

What really sparked our interest about these samples, however, was how it related to our analysis of microplastics in bottled water – often considered purer and healthier than tap water.

After a study investigated the levels of microplastics in bottled water products in 2018, PerkinElmer then tested the hypotheses found in this research about the origin of microplastic particles smaller than 200µm. (see What exactly is a microplastic? box below) Using our Spotlight 400 FT-IR imaging system, we analysed five bottled water brands and compared the results to a sample of unfiltered tap water.1

Preparing water for FT-IR analysis is simpler than with food or beach samples. Water only requires filtration onto IR-compatible filter media prior to direct analysis with the FT-IR microscope. This pulls the individual microplastics from the bottled water and allows the use of imaging technology to find and identify them.

Although we found more fragments in tap water – which is typically less filtered than bottled water – other results were the most telling. All samples contained microplastics sized between 20-200µm and had longer fibres too. However, we noted that these chemicals produced spectral peaks corresponding to common plastics including polypropylene, polyethylene and PET, with the fibres being cellulose-based materials.

Identifying microplastics in bottled water immediately led us to ask the obvious follow-up question: how did they get there? Perhaps the most commonly held hypothesis is that particles are introduced during the bottle manufacturing process. Alternatively, they are the result of the shearing motion when opening the bottle. The fact that most bottles are made from polypropylene, polyethylene and PET – the exact polymers identified in our study – has given this latter theory greater credence.

While it may be a viable explanation, these three polymers corresponded to only 5% of the particles identified. A mix of polyamide, polyvinyl alcohol and polyacrylonitrile, as well as cellulose or cellulose acetate molecules that typically shed from clothing, made up the other 95%. Cellulose particles often originate from fabrics, which is unexpected in a clean environment like a bottled water manufacturing plant. As such, the presence of these cellulose materials is currently still uncertain. Combined with the presence of additional polymers, these findings disrupt the hypothesis that microplastic contamination is the sole result of manufacturing processes – indicating that they instead originate from other means.

What exactly is a microplastic?

The European Chemicals Agency defines microplastics as any plastic polymer that is less than 5mm in diameter. Broadly speaking, they can be separated into two different categories – primary and secondary microplastics.

Primary microplastics are manufactured and added to products such as facial scrubs, toothpastes and shower gels. Although used for many years in the industry, new legislation is outlawing their use in everyday commodities, leading many companies in the US and across Europe to phase out their inclusion.

On the other hand, secondary microplastics are those formed through the degradation of bulk plastic items. Degradation is due to external factors such as exposure to UV light or mechanical attrition through wind or waves. This causes larger plastic bottles and other single-use plastics to break down into smaller microplastics that eventually culminate in our oceans.

Recent estimates suggest plastics now make up nearly 70% of all ocean litter, equating to 15-51 trillion plastic particles in our oceans.2 Moreover, plastic waste persists in the environment, with plastic bags discovered on the surface of the Mariana trench, the deepest depths of the ocean. This has led to growing international pressure surrounding the use of single-use plastics, with the EU recently announcing new legislation to ban some of the most common single-use plastics.

Microplastics in our food chain

One of the major concerns around microplastic contamination is its entrance into our global food chain. Owing to the prevalence of plastic in our oceans, one of the most obvious sources is through seafood. 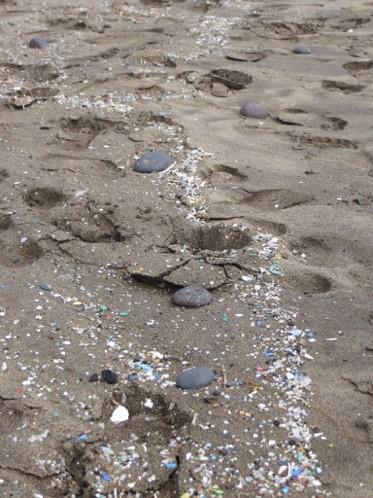 Researchers around the globe have spent years investigating how microplastics infiltrate our food chain. Zooplankton, microorganisms at the bottom of the food chain, have been known to ingest microplastic particles, which are biomagnified before ultimately reaching our plates.3

It is evident that they accumulate in various waterborne toxins or contaminants, which means they can biomagnify up the food chain and potentially put consumers at risk. Therefore, to help protect consumer safety, it is necessary to monitor the presence of microplastics in all types of samples. This includes the ocean and other waterways, seafood and bottled water.

As part of our work and passion for microplastics research, including projects with organisations like Greenpeace, we have developed innovative technologies and methodologies to help scientists across the globe analyse this issue in more advanced ways. 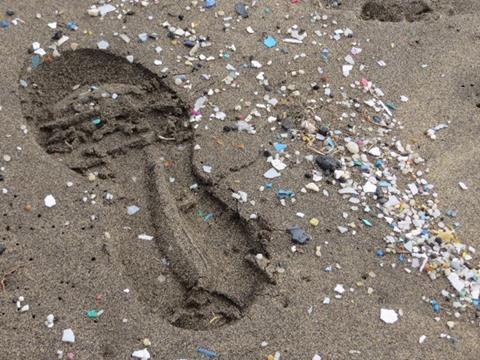 Microplastics on the beach at Caleta de Famara, Lanzarote, Spain

One of the major considerations when analysing microplastics revolves around sample preparation. Different types of food are treated in different ways prior to FT-IR instrument analysis. For example, the removal of biological material from seafood is necessary to avoid interference in the IR spectrum and allow clean analysis of pure microplastic particles. A common method used in this instance is digestion, with scientists able to choose between acidic, peroxide-based and enzymatic variants, depending on the sample type.6

In contrast, the microplastics collected from beaches are relatively clean samples. Exposure to the sun, waves and water not only break plastics down into smaller pieces but also removes most external contaminants. Sample preparation – which can be lengthy in specific applications of microplastics analysis – is relatively simple. For the samples collected from the Lanzarote and UK beaches, analysis was routine. After cleaning the samples to remove sand and biological matter, we used PerkinElmer’s Spectrum Two FT-IR spectrometer to measure the larger particles directly. Particles smaller than 200µm were measured using an FT-IR imaging microscope.

The industry is moving to standardise every aspect of microplastics analysis, from sample preparation to data analysis

The research world has changed since we first began analysing microplastics, with emphasis now placed on avoiding the discrepancies that arose between different groups of microplastics researchers. With this in mind, the industry is moving to standardise every aspect of microplastics analysis, from sample preparation to data analysis. Many global organisations - like the European Commission’s Joint Research Centre and JPI Oceans – collaborate with companies and other organisations to harmonise relevant analyses and prevent misreporting.

While that chance discovery in Lanzarote became my personal passion it also contributed to a global scientific and cultural movement. Scientists are helping tackle the challenge of microplastics by connecting through innovation, solutions and methodologies. We should look to leverage the power of science and advanced analysis to accomplish our goals together, as we work to make our world and ourselves healthier.

Ian Robertson is a senior applications scientist in the PerkinElmer spectroscopy group.

6. Optimizing the Workflow for Microplastic Analysis by FT-IR microscopy, PerkinElmer 2018