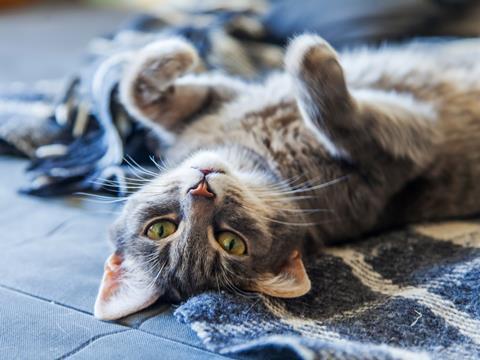 Researchers in Japan have made artificial cat blood by combining feline serum albumin (FSA) with haemoglobin.

Cat blood is tricky to store. Blood transfusions between cats do happen but it’s very important to match the donor and receiver’s blood type, otherwise severe reactions can arise. Red blood cell substitutes for humans and animals are on many researchers’ agendas but the hunt is still on for a preparation that is free from drawbacks.

The artificial oxygen-carriers for cats made by Teruyuki Komatsu of Chuo University and his colleagues combine bovine haemoglobin with FSA grown in genetically engineered yeast. It was important for the researchers to know FSA’s structure before they attempted to attach it to the haemoglobin. However, FSA had never been characterised before so Komatsu’s team sent it to the International Space Station. ‘In principle, these crystals could be formed on Earth. However, in the microgravity environment of space, there is no sedimentation or convection to disturb crystal growth, so high quality crystals are grown more easily,’ explains Komatsu. These crystals were then returned to Earth for analysis.

Equipped with the knowledge of FSA’s structure, the team covalently linked three FSA units to surface maleimide groups on each haemoglobin molecule. In theory, coating haemoglobin with FSA should stop a cat’s immune system from classifying the clusters as ‘foreign’ and initiating a response against them.

Molecular biologist Leif Bülow of Lund University, Sweden, says the work is promising, but has reservations: ‘When each haemoglobin molecule is covered by FSA, there will be serious limitations on the maximal oxygen load. Therefore while the concept of this approach is fascinating, the actual value of it remains to be determined.’ 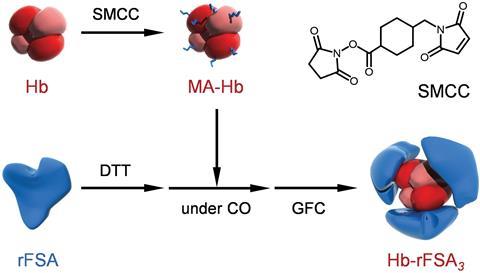 Each haemoglobin is covered with an average of three FSA molecules

Komatsu’s group studied the immunogenicity of their carriers using a blood test kit and reported that injecting cats with the clusters was unlikely to make them generate haemoglobin antibodies. However, Thomas Chang of McGill University, Canada, who conducts research on artificial cells, stresses the importance of waiting for further proof: ‘Even though FSA should not be antigenic in cats, the researchers need to show that the complex is still not antigenic in vivo.’ And biomaterials expert Akon Higuchi from the National Central University in Taiwan says ‘the researchers should demonstrate the toxicity of the carriers in cats.’

Komatsu’s group is already preparing to proceed to the next step: ‘We will carry out an in vivo study to confirm the safety and efficacy of the clusters. After that, we aim to put the artificial blood into practical use.’