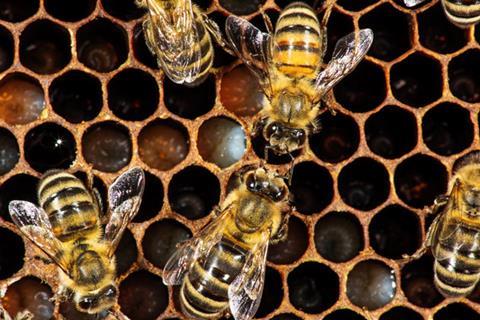 Bees use an egg yolk protein to prime their offspring’s immune system against different pathogens, Finnish researchers have discovered. This deeper understanding of how honeybee immune systems function means that a bee ‘vaccine’ capable of protecting pollinators against disease is now potentially within reach.

Although honeybees are commercially important pollinators, populations are in decline and stress, illness and pesticides have been blamed for the current crisis. Their disappearance has become an increasingly urgent issue and several new pesticide policies have been enacted in response. Similarly, research into the bee immune system has gathered pace. Specifically insects’ ability to prime their offspring’s immune system despite having no antibodies has long been a mystery. Now, a team from University of Helsinki seem to have the answer.

‘We were dancing in the lab,’ Dalial Freitak, main author of the paper, says of the day the results came in. ‘It was like winning the lottery!’ The team had discovered that vitellogenin, a protein also found in egg yolk, finds and binds the signature molecules of pathogens eaten by the queen bee. These signature molecules are then carried by vitellogenin into the queen’s eggs, where they work as primers for future immune responses. The breakthrough has allowed researchers to start working on bee vaccines.

‘We have filed for a patent,’ says Freitak, ‘and currently I am testing the vaccine on the bees against [the disease] American foulbrood.’ The group has made a formulation which can be given to queen bees as part of their royal jelly, a nutritious secretion only eaten by queens and larvae. ‘From the first tests, I can say that the queen bees are very happy and happily laying eggs,’ Freitak says. ‘We don’t have conclusive results yet, but the first trials seem promising.’

The team is hoping that they will be able to produce custom-made vaccines, specialised to different kinds of insects and against specific pathogens. But saving the bees has top priority: ‘I think it’s not too late,’ says Freitak. ‘If we invest enough time and resources in understanding bee health better, then I think we have a chance. We have to, there’s no choice – if they go we also go.’

‘In my opinion, the results … are of major interest in the field of trans-generational immune priming in insects,’ says Anne Beemelmanns of GEOMAR Helmholtz Centre for Ocean Research Kiel, Germany, who wasn’t involved with the study. ‘It’s surprising that [they] could confirm … and explain a most likely mechanism of strain-specific immune priming in invertebrates.’