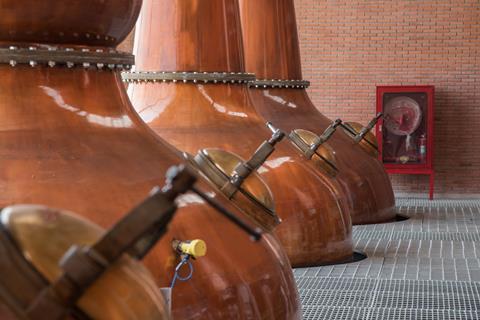 Copper recycled from industrial waste can act as a catalyst for synthetically-important organic reactions. The metal was recovered from whisky distilleries using magnetic nanoparticles that were produced by bacteria.

Using copper stills in the distillation process is important for developing the flavour and character of Scotch whisky. A considerable amount of copper leaches into the spirit, which the manufacturer removes before the whisky is aged and bottled. But there remains the question of what to do with this waste.

Now, a team of researchers based at the University of Manchester, UK, led by Richard Kimber has developed a method that not only removes metal from this waste stream, known as spent lees, but also recycles it into something useful. 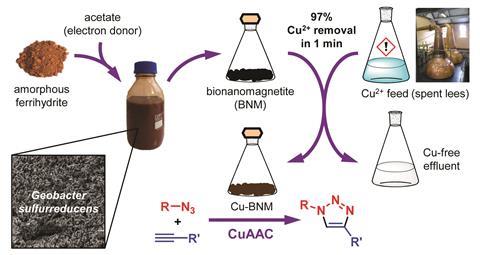 The researchers repurposed the copper they had recovered as a catalyst for click chemistry – a class of reaction known for being specific, efficient and useful for producing a wide array of products from polymers to pharmaceuticals. They found the copper catalyst worked three times before its activity started to drop.

‘Some livestock are sensitive to copper and cannot make use of the protein rich distillery residues, which are especially valuable to livestock in remote locations,’ comments Ronald Daalmans, environmental sustainability manager at Chivas Brothers, the company that supplied Kimber’s team with the distillery waste. Now, the remaining residue can serve as a nutrient-rich fertiliser and animal feed.

Louise Horsfall, an expert in biotechnology at the University of Edinburgh, UK, says that more information is required to show how applicable this approach is to other waste streams: ‘Analytical data for the treated spent lees is not presented, so we do not know if any metal exchange took place, if there is any metal selectivity or if the treatment would work with other metals.’ However, her overall impression is that studies such as this are valuable steps towards a circular economy. ‘It’s an exciting piece of work that clearly shows there is value to be found in industrial waste.’