Getting a better grasp of manganese to fight flu 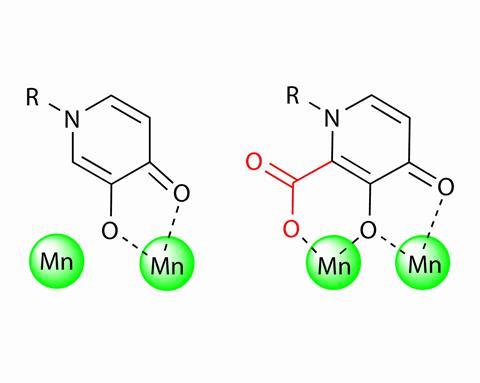 By tweaking their flu enzyme inhibitor the UCSD team were able to target both metal atoms, making the compound far more potent

A simple three-atom tweak to a promising flu-fighting molecule makes it a thousand times more potent, scientists have found. The tweak allows the compound to latch onto both, rather than just one, of the manganese atoms at the heart of a flu enzyme, knocking it out. Such a drug could serve as a backup to vaccines, which can fail as the 2017–18 flu season showed.

Vaccines rely on researchers being able to predict next year’s dominant virus strains. Sometimes, those predictions can’t account for the rapid mutations the virus undergoes. For the 2017–18 vaccine, the US Centers for Disease Control and Prevention estimate that it was only effective in 40% of cases. Therefore, having effective antiviral drugs is crucial, says Seth Cohen from the University of California San Diego, US, who presented his flu-blocking molecule at the American Chemical Society meeting in New Orleans.

Cohen says that the way to tackle flu is by targeting one of its metalloenzymes. With it knocked out, the virus can’t hijack human cells to replicate. Although flu can evade many treatments through rapid mutations, this enzyme stays the same across all influenza strains.

After screening around 300 different structures Cohen’s team thought they had found a potent candidate. It wasn’t until they saw a crystal structure of their best pick in action that they realised something was amiss: the compound only bound to one of the two manganese atoms in the viral enzyme’s active site.

The researchers then decided to add a carboxylic acid substituent to the active part of molecule that could grab hold of the second manganese – a simple tweak that increased the compound’s ability to block the enzyme by an order of magnitude. ‘We actually made the compound so potent that the way we evaluated the other molecules was no longer effective, we had to move to more sophisticated method,’ Cohen says.

If Cohen’s compound makes it through to clinical trials, it could be one of the only 5% of drugs that target metalloenzymes. ‘We think there is a general perception that small molecules that bind metals would be very non-specific because metals are so important to human biology,’ he says. However, Cohen thinks it’s a question of the right molecular design: coupling a metal-binding ‘warhead’ with a guidance system that only fits the viral enzyme should stop it from targeting other enzymes. Already, drugs like HIV medication raltegravir have proven that metalloenzyme inhibitors can be safe. ‘I think we’re going to see much more of these drugs,’ Cohen says.