Photoredox catalysis has opened many doors in organic synthesis in the past decade, enabling the small-scale synthesis of many compounds that are otherwise difficult or impossible to produce. It is problematic above laboratory scale, however. Now researchers in the US present a microfluidic flow cell that can synthesise many of the same molecules as photoredox catalysis, and potentially others. They demonstrate the method’s viability by performing key chemical transformations and synthesising a liquid crystal used in LCDs.

In simple electrochemistry, the target product is formed either by oxidation at the anode or reduction at the cathode, with waste products at the other electrode. In redox-neutral electrochemistry, however, high-energy radicals are produced at the two electrodes before combining in solution. This is extremely difficult to make happen in a traditional electrochemical setup as the radicals almost invariably decompose before diffusing together. Photoredox catalysis avoids this problem by using the catalyst as both an oxidant and a reductant, generating both radicals on the surface of the same homogeneous catalyst in a solution irradiated by high-intensity light. This has proved immensely useful for generating new molecules to test them for potential pharmaceutical activity, for example: ‘Photoredox catalysis is going to win the Nobel prize,’ predicts Stephen Buchwald of Massachusetts Institute of Technology.

Nevertheless, the technique has difficulties. The catalysts required are often precious metal complexes, making it expensive. The potential energy landscape of the catalyst is fixed by the material. And it is difficult to scale up, as light can penetrate only a limited depth into a reaction mixture. Photoredox catalysis is therefore widely used for generating small quantities of molecules to test for specific properties, but chemical engineers then have to ascertain whether and how any promising molecule can be produced at scale. 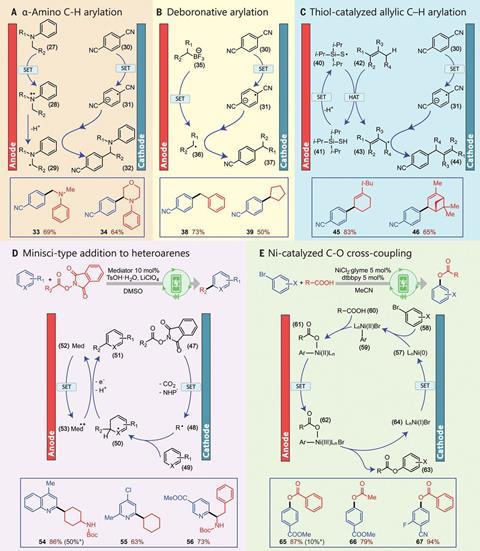 The system works with a wide range of transient radical precursors

In an attempt to address these issues, chemists led by Buchwald collaborated with chemical engineers led by Klavs Jensen, also of MIT. Reducing the distance between anode and cathode reduces the distance two radicals need to diffuse, but simply scaling down a traditional cell would reduce its throughput. The researchers therefore designed a microfluidic flow cell in which the cathode and anode were laser etched like face-to-face combs, with their teeth interspersed. This created a microfluidic channel into which the reactants flowed at one end and the products were removed at the other. There was no need to search extensively for photoredox catalysts that would provide the optimum potential energy landscape to produce the intermediates: ‘You can apply any potential that you like,’ explains Jensen’s postdoc Yiming Mo.

The researchers demonstrated the usefulness of their technique by performing various key redox-neutral transformations of potential importance for producing high value pharmaceutical chemicals. They also synthesised 4-cyano-4’-pentylbiphenyl, commonly known as 5CB – a liquid crystal widely used in LCD displays. The current synthesis process is complex and requires multiple steps, but the researchers successfully achieved a two-step synthesis from 4-chlorobenzonitrile, which costs less than $1 per gram, compared with 5CB, which is worth about $100 per gram. Team member Zhaohong Lu says that synthesis reactions requiring many hours using photoredox catalysis could sometimes be performed in minutes using their new method. ‘We’re now looking at how we can solve challenges that are not being solved under photoredox conditions,’ he adds. 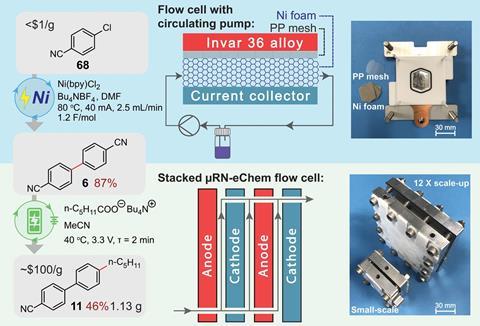 Organometallic chemist John Hartwig of University of California, Berkeley, US, is impressed: ‘There has been a lot of activity in using photocatalysis for catalytic transformations and other transformations in organic chemistry. and I have to say I’ve always wondered why one couldn’t just do this using electrochemistry.’

Organic chemist Robert Phipps of the University of Cambridge in the UK agrees. ‘Sometimes important breakthroughs do seem quite obvious but it can take real insight to put two and two together,’ he says. ‘I think the reason this is going to be quite impactful is that this relatively simple approach – albeit aided by some pretty sophisticated technology in microfluidics – is demonstrated to work on a whole host of different reactions that synthetic chemists would use on a day-to-day basis.’