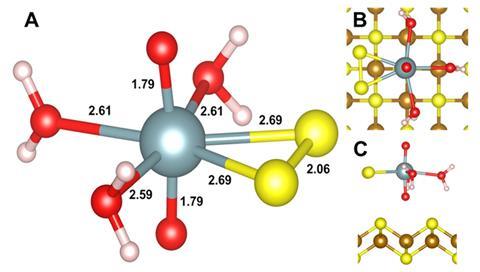 Computed structure of the isolated uranyl(VI)–persulfide species with bond lengths shown in Ångström in A, with the complex adsorbed to a mineral in B and C

Scientists in the UK have discovered a new uranium compound that may form below ground contaminated with the element. The finding has put plans to bury nuclear waste in the spotlight.

By 2125 the UK’s nuclear waste will exceed 4 million m3 – enough to fill Wembley stadium. From laboratory clothing to reactor parts, various forms of waste contaminated with uranium are often encased in cement and placed within steel drums. All this waste will ultimately reach the same destination – a geological disposal facility (GDF).

A GDF is an underground vault between 0.2 and 1km deep, stretching over 4km. Once the waste has entered this vast structure, engineers will fill the space with a barrier material, such as cement. This ‘backfill’, as well as the surrounding geology, acts as a natural radiation barrier, while preventing the slow ingress of groundwater into the site.

‘This waste needs to be safely stored for hundreds of thousands of years,’ says Samuel Shaw, an environmental chemist at the University of Manchester, UK. One worry, he explains, is that sulfate-reducing microbes in the ground may reach the nuclear waste over such timescales. The resulting sulfides produced by these microbes may react with uranium, which can become more soluble and contaminate the surrounding environment.

Shaw and colleagues wanted to determine the fate of a prevalent uranium complex (U(VI) sorbed to ferrihydrite) under these environmental conditions. The team analysed the reaction between the U(VI) complex and sulfide by exposing samples to x-rays from the UK’s Diamond Light Source.

Using x-ray photoelectron spectroscopy, the team determined that the ferrihydrite transformed into an iron sulfide mineral. Most of the uranium reacted to form the relatively immobile U(IV)O­­2. However, up to 2.5% was released into solution during the first few hours as a briefly formed U(VI)–persulfide complex, before transforming into the final immobile form. ‘It was very much unexpected to us,’ comments Shaw. ‘This is a new form of uranium formed under environmental conditions.’

Although such experiments are small in scale, Shaw stresses they are vital to understand what may happen over the vast lifetime and scale of a potential GDF. ‘100,000 years is a really, really long time and no engineered barrier will remain consistent for all that time,’ he comments. ‘So, these scenarios about understanding how uranium behaves in this sub-surface geology really need to be investigated.’

It remains unclear what the implications of this finding are for a proposed GDF. For Dominik Weiss, an environmental geochemist at Imperial College London, UK, the research raises an important issue. ‘The question now is if these complexes really lead to increased mobility,’ Weiss tells Chemistry World. ‘The work is important as it clearly shows us that we still need to learn much about the aqueous geochemistry of uranium if we want to conduct thorough risk assessments.’