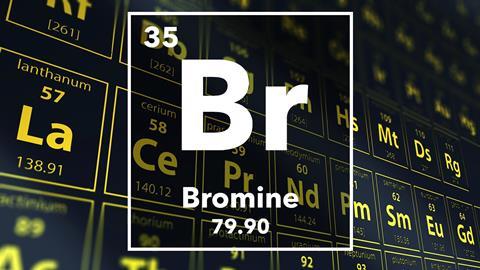 An element that has given us drugs, insecticides and fire extinguishers

Hello, welcome to Chemistry in its element where this week we're sniffing out the chemical that is named after the Greek word for stench and this substance has certainly kicked up a stink in its own right in its time because it makes holes in the ozone layer. But it's not all bad as it's also given us drugs, insecticides and fire extinguishers and to tell the story of element number 35, here's chemist and author John Emsley.

Fifty years ago bromine was produced on a massive scale and turned into lots of useful compounds. Photography relied on the light-sensitivity of silver bromide, doctors prescribed potassium bromide as a tranquiliser, leaded petrol needed dibromomethane to ensure the lead was removed via the exhaust gases, bromomethane was widely used to fumigate soil and storage facilities, and fire extinguishers contained volatile organobromine compounds. Today these uses have all but disappeared.

World production of liquid bromine once exceeded 300,000 tonnes per year, of which a significant part was produced by a plant on the coast of Anglesey in Wales, which closed in 2004. This extracted the element from sea water, which contains 65 p.p.m. of bromide, and was done by using chlorine gas to convert the bromide to bromine which was then removed by blowing air through the water. 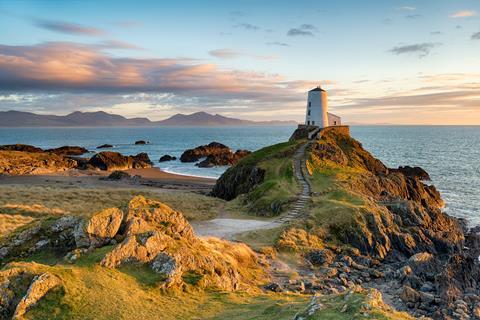 The bromine story began with 24-year-old student Antoine-Jérôme Balard. He found that the salt residues left by evaporating brine from Montpellier, France, gave an oily red liquid when treated with acid. He realised this was a new element and reported it to the French Academy, who confirmed his discovery. When they realised it was chemically similar to chlorine and iodine they proposed the name bromine, based on the Greek word bromos  meaning stench. 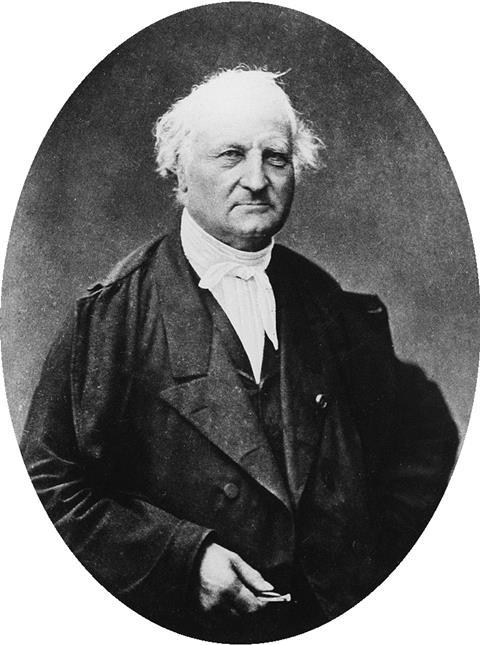 While some uses of bromine have declined because the products made from it are no longer needed, others have been discouraged because of the damage this element could cause to the ozone layer. Volatile organobromine compounds are capable of surviving in the atmosphere long enough to reach the upper ozone layer where their bromine atoms are 50 times more damaging than the chlorine atoms – which are the main threat, coming as they did from the widely used chlorofluorocarbons, the CFCs. The Montreal Protocol which outlawed the CFCs sought also to ban the use of all volatile organobromines by 2010, and this restriction especially applied to the fumigant bromomethane and compounds such as CBrClF2 which were in fire extinguishers for electrical fires or those in confined spaces.

Bromomethane was a particular cause for concern but banning it has proved impossible because it has some uses for which alternatives have not been found. Often referred to as methyl bromide, CH3Br (boiling point 3.5°C), this has been widely employed to kill pests in the soil, in storage facilities, and to treat wood before it is exported. In the soil it kills nematodes, insects, bacteria, mites and fungi which threaten crops such as seed crops, lettuce, strawberries, grapes, and flowers such as carnations and chrysanthemums. 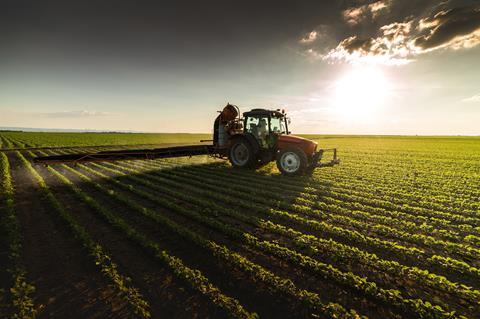 In fact bromomethane is not quite so threatening as it first appears. Environmental research uncovered the unexpected result that half the bromomethane sprayed on soil never evaporates into the air because it is consumed by bacteria. Nor are man-made organobromines the main source of these compounds in the atmosphere. Marine plankton and algae release around half a million tonnes of various bromomethanes a year and in particularly tribromomethane (aka bromoform, CHBr3).

Even more surprising has been the discovery that something in the oceans is making pentabromodiphenyl ether. This has been used as a fire-retardant, and when in 2005 it was found to be present in whale blubber it was at first thought to be the man-made variety. However, the carbon atoms it contained had detectable amounts of 14C meaning that they were of recent origin, whereas the fire retardant is made entirely from fossil resources and contains no 14C. Another complex bromine compound from the sea is the purple dye once used for clothes worn by the Roman Emperors. Tyrian purple as it was called was extracted from the Mediterranean mollusc Murex brandaris and this molecule contains two bromine atoms and is 6,6'-dibromoindigo. 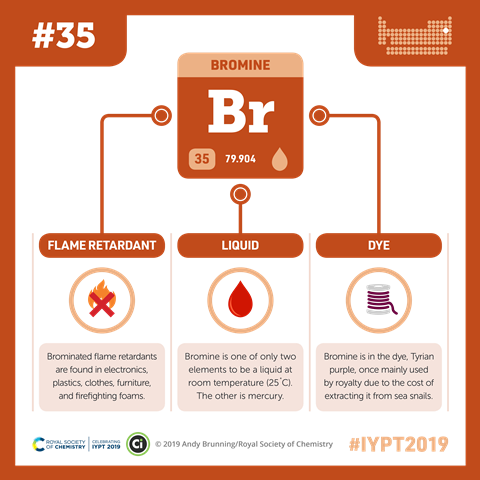 Even when it appears benign as bromide ions in water, this element can still pose a threat to health. Ozonising drinking water in order to sterilise it converts any bromide to bromate (BrO3-) which is a suspected carcinogen and so must not exceed 10 p.p.b. And some reservoirs in California where this has been exceeded have had to be drained because of it.

Once so beneficial, bromine now appears to cause nothing but trouble. Yet in ways unseen, such as in the pharmaceutical industries, it still continues to be used to provide intermediates in the manufacture of live-saving drugs.

John Emsley unlocking the secrets of the brown element Bromine. You can find out more about some of John's other favourite elements in a series he has written for the RSC's Education in Chemistry and that's on line at rsc.org forward slash eduction. Next time on Chemistry in its element Nobel prize winning chemist Kary Mullis explains why a soul of iron is essential.

And you can catch Kary Mullis ironing out the wrinkles in metabolism's most important element on next week's Chemistry in its element. I'm Chris Smith, thank you for listening, see you next time.