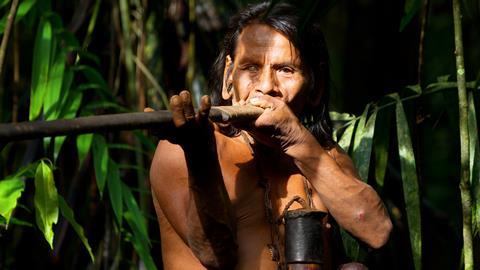 We’ve got a killer double-bill this week, as Jamie Durrani presents a pair of poisons…

‘While the hot black stuff is simmering down to about the volume of a pint, it must not be allowed to scorch. Guarding your hand with a thick green leaf, you anxiously remove individual embers from the fire or, if you think best, shove them closer to the pot and blow gently on them. It is your only means of temperature control in the most delicate and nerve-racking procedure in all the jungle.’ 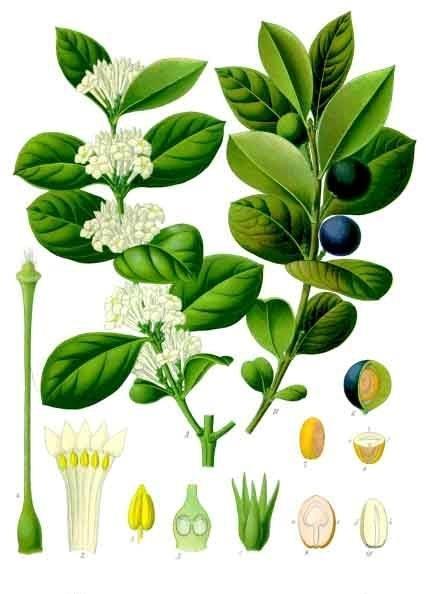 This is how the early 20th century explorer Richard Gill described how inhabitants of the Amazon rainforest produced ‘the flying death’ – curare. This alkaloid is extracted from the roots and bark of forest plants and used by hunters to poison the tips of darts and arrows.

The first written reference to curare is attributed to an Italian monk named Peter Martyr d’Anghera. In 1516, d’Anghera wrote about South American arrow poisons in his book on the New World De Orbe Novo:

‘There are certain old women skilled in the art, who are shut in at certain times and furnished with the necessary materials; during two days these women watch and distil the ointment. As soon as it is finished the house is opened, and if the women are well and not found lying on the ground half dead from the fumes of the poison, they are severely punished, and the ointment is thrown away as being valueless.’

The term curare actually refers to a variety of plant extracts, all of which contain a mixture of different alkaloids. In many curare preparations, the major active ingredient is d-tubocurarine. This compound’s structure means that it will block nicotinic acetylcholine receptors at the neuromuscular junction, preventing nerve impulses from activating muscles. The victim of a curare-dipped arrow will quickly become paralysed and – without assistance – they will asphyxiate, as their respiratory muscles can no longer contract. Despite this, curare compounds are harmless when ingested orally – they must be get into the bloodstream to have an effect – which is why it is safe for people to eat curare-poisoned prey.

Gill spent years studying the culture of indigenous people in Ecuador and eventually gained the trust of village elders. He learned the art of curare extraction, and procured large quantities of the crude substance. In 1938, Gill was able to sell his supply to the pharmaceutical firm E.R. Squibb and Sons, who purified the material further into a form labelled ‘Intocostrin (extract of unauthenticated curare)’.

Intocostrin became the first muscle relaxant used in clinical anaesthesia when, on the 23rd of January 1942, Harold Griffith and Enid Johnson administered a dose to a 20 year old plumber, who was due to undergo an appendectomy. Griffith recalled:

‘Well, I thought to myself, the worst it can do is to paralyse the patient's respiration and that is not a very serious concern for anaesthetists, we control respiration every day in the operating room.’

The surgery itself was uneventful, and the patient fully recovered. But this was nonetheless a major milestone in medical history, as the introduction of muscle relaxants allowed for reduced anaesthetic doses and increased the scope of surgical procedures. 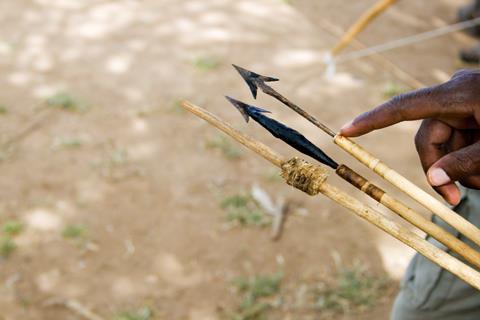 In eastern Africa, hunters had traditionally used another plant extract – ouabain – to enhance their weapons. As early as the 3rd century BC, the Greek philosopher and botanist Theophrastus had reported on a ‘root with deadly effect that the Ethiopians use to smear on their arrows’. In fact, ouabain is so powerful, poachers would coat the heads of their spears with it when tracking elephants.

Ouabain is found in all parts of the acokanthera schimperi plant – known as the ‘poison arrow tree’. Reportedly some poison makers identify the most potent of these plants by counting the number of dead insects they find below them. 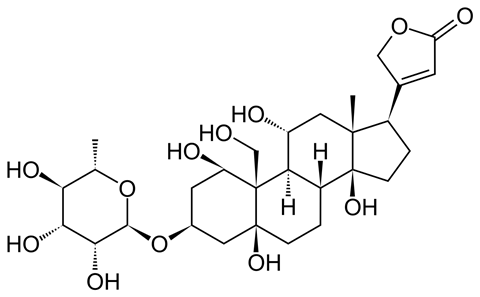 Although they are both harvested from plants and used as an arrow poison, ouabain’s biological mechanism is quite different from that of curare. Ouabain is a cardiac glycoside that inhibits the enzyme responsible for regulating the concentration of sodium and potassium ions within cardiac muscle cells. This seriously disrupts heart function and results in cardiac arrest.

But despite its toxicity – and like curare – ouabain does have some medical uses. Small doses have been used to treat hypotension and irregular heartbeats. And researchers seeking to develop a male contraceptive pill have reported that molecules derived from ouabain can bind to a protein that is only found in sperm cells, and which interferes with sperms’ ability to swim.

It’s not only people that exploit ouabain’s poisonous power. The African crested rat has been observed chewing on the roots and bark of the poison arrow tree. But rather than swallow the toxic mixture, this ingenious creature will smear it onto the spongey, absorbent hairs on its flank. When threatened the rat will expose this area to a predator and entice it to take a bite. Even if the predator is lucky enough to survive the encounter, it will certainly think twice before taking on another crested rat.

That was Jamie Durrani with the arrow poisons curare and ouabain. Next week I’ll be investigating acetylcysteine, to find out how this common decongestant was delivered, in a jiffy bag, right into the centre of a cycling controversy. Until then, we’d love to hear from you. Get in touch with any comments – tweet @chemistryworld or email chemistryworld@rsc.org. Thanks for joining me, I’m Ben Valsler.