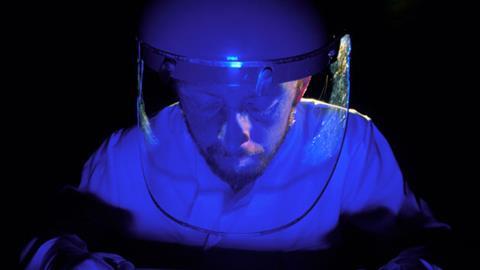 Kat Arney shines a light on the fluorescent DNA marker

This week, Kat Arney discovers a compound that lights the way to a better understanding of genetics…

How do you illuminate the blueprint of life? The solution lies in the chemical ethidium bromide, and molecular biologists all over the world will be familiar with the ethereal orange glow of ethidium bromide highlighting fragments of DNA under ultraviolet (UV) light. 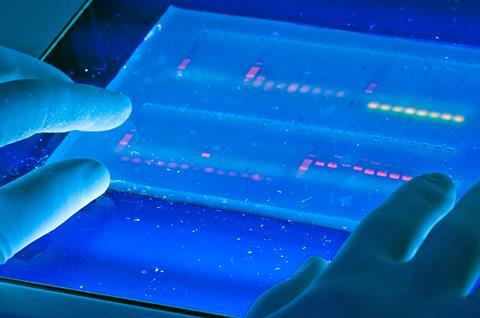 Originally used as an anti-parasitic, anti-bacterial and anti-viral drug in the 1940s, ethidium bromide has a passionate affinity for DNA, which gives it its medicinal properties. Made up of linked rings of carbon and hydrogen atoms (with a few nitrogens and a bromine ion thrown in) its flat, plate-like shape enables it to easily slip between the rungs of DNA’s double helical ladder – a feat known as intercalation. By locking into DNA like this, ethidium bromide blocks the enzyme responsible for copying out the genetic code when cells, bacteria and viruses reproduce. Not only that, but by slotting into the helix it also changes the way that DNA interacts with UV light, creating that characteristic orange gleam.

To study DNA in the lab, scientists often use a technique called gel electrophoresis. This separates out pieces of DNA by size, using an electric current to force them through a slab of jelly-like material called agarose. Smaller fragments migrate quickly through the gel, like little animals scurrying quickly through the undergrowth in a dense forest, while larger pieces get held up. But this array of DNA can’t be seen with the naked eye, which is where ethidium bromide comes in - either by adding it to the gel slab before the DNA runs through, or soaking it afterwards. Then it’s time for a trip to the dark room, where the gel and its DNA cargo are placed – carefully! – on a UV-generating light box. Switch on the light and the magic happens: neat orange bands of DNA flicker into view, ready to be photographed (assuming that the experiment has worked…) 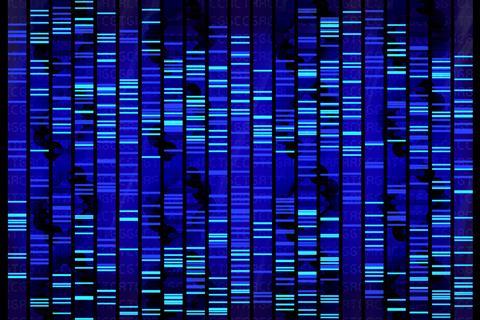 While ethidium bromide’s ability to slot itself into the DNA double helix makes it a useful tool for visualising the twisted ladder of life, it also makes it mutagenic, creating potentially cancer-causing DNA damage. And there is also a risk that it could cause birth defects by damaging foetal cells in the womb. Combine this with the DNA-damaging effects of ultraviolet light, and it’s enough to give laboratory health and safety officers cause for concern. Obviously, researchers take safety precautions in the lab, such as always using gloves to handle solutions and gels containing ethidium bromide and donning safety goggles and lab coats to protect against UV. And although it’s safe to pour down the sink when diluted with lots of water, many labs will now collect liquids containing ethidium bromide, treating them with bleach or other agents that break it down, or using charcoal and similar agents to scrub it out of solution.

Even so, in recent years there’s been a growing trend to ditch ethidium bromide for alternative DNA dyes. But are they actually safer? One study showed that a commonly-used alternative green dye was actually more toxic than ethidium bromide when tested in rats, although both chemicals only cause problems at concentrations far higher than ever would be used in a regular lab. Furthermore, ethidium bromide injections have been used to treat parasite infections in cattle for many years, without seeming to have any effect on either cancer rates or birth defects. And researchers certainly don’t go about injecting themselves with the stuff. There’s also an argument to suggest that disposal methods such as chemical breakdown and charcoal treatment actually make things worse, by creating more toxic byproducts, or concentrating the stuff into more dangerous doses. And although safety is paramount in the lab, ethidium bromide is a lot cheaper than the newer alternatives, and arguably just as safe. For now, at least, its orange glow keeps on going.

Next week, Raychelle Burks examines a compound found in cosmetics that can make you very attractive…

Fragrant sesquiterpenes, like those in cedarwood oil or sandalwood oil, are are often touted as being insect repellants. Cedrol might repel some insects, but it attracts mosquitos. And not just any mosquitos – pregnant mosquitos.

Find out why attracting pregnant mosquitoes might not be as bad as it sounds in next week’s Chemistry in its Element. And are there any compounds you would like us to look into? Contact us on chemistryworld@rsc.org, or find us on twitter – we’re @chemistryworld. I’m Ben Valsler, and thanks for joining us.