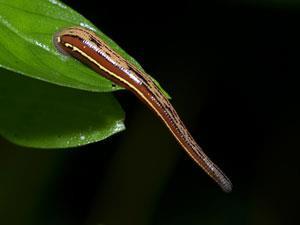 This week, Helen Scales is leeching off you.

Medieval leech collecting has to be a strong contender for the worst job in history. It often fell to women, who hitched up their skirts and waded into ponds and puddles barelegged. They would splash around for a bit to attract the blood-sucking invertebrates then pick them off their legs by the bucket load. It must have been a bloody business. Demand came from an extraordinary leech frenzy that began in ancient Egypt. For centuries bloodletting remained a popular medical treatment as it was long thought that people suffered from having too much impure blood. 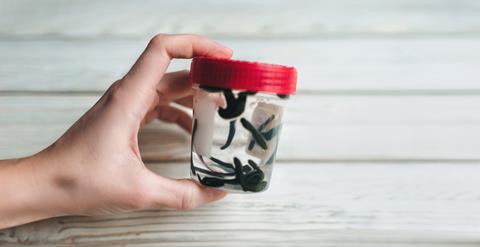 Leech mania reached fever pitch thanks to the fetishes of an influential physician in Napoleonic France. Francois Broussais practiced what he preached, covering himself every day in sixty leeches. Following his lead, leeches became a status symbol among the general public. People who couldn’t afford to buy their own leeches would rent them from local doctors. And in the face of dwindling nearby stocks of wild Hirudo medicinalis, the European medicinal leech, prices rocketed, leech taxes were introduced and leech smuggling from overseas became rife. Records show that in the early decades of the 1800s, billions of leeches were imported into Europe.

The obsession with leeches eventually faded when doctors began to realise that bloodletting was killing more patients than it was saving. And people, more or less, left leeches alone until it was revealed that they produce a molecule that does in fact hold useful medicinal properties.

The presence of a powerful anticoagulant in leech spit was first discovered in 1884 by physiologist John Berry Haycraft. He named it hirudin but the molecule wasn’t isolated until the 1950s and it was only in the 70s that scientists worked out its structure.

Hirudin is a peptide made up of 65 amino acids containing three disulphide bonds. It stops blood from clotting by inhibiting a protease enzyme called thrombin. Under normal conditions, thrombin converts soluble fibrinogen (a glycoprotein in blood plasma) into insoluble fibrin – these fibrous, non-globular proteins link up to form a mesh that traps blood platelets and plugs damaged blood vessels. 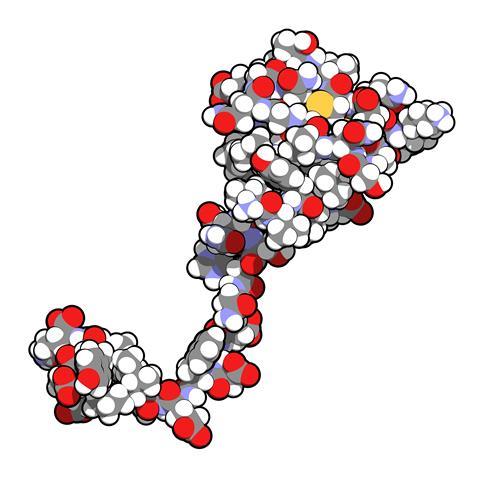 Since the discovery of hirudin, it’s emerged that leech saliva is a soup of molecules that assist them in their blood sucking habits. Among the 60 or so proteins are enzymes that inhibit the clumping of platelets, vasodilators that widen blood vessels and make blood flow faster, as well as antiviral protease inhibitors which may prove to have cancer-fighting properties. And there’s also a mysterious anesthetic that makes a leech bite painless but so far remains undiscovered.

Since the 1980s, leeches have been brought into hospitals and adopted as a modern surgical tool in particular in plastic and reconstructive surgery where blood flow is critical. Often surgeons find that large arteries delivering blood to tissues are easy to reconnect but smaller veins are more problematic. Instead of draining blood back to the heart, damaged veins commonly become clogged with blood and surrounding tissues can quickly die. Popping on a couple of leeches to the affected area helps drain blood and promote blood flow, giving vital extra time for veins and tissue to recover.

In 2009, a man swimming off Bondi Beach in Australia was attacked by a shark that almost bit his hand clean off. Surgeons successfully reattached his hand with the aid of leeches. The benefits of stimulating blood flow far out way the small meal of blood the leeches consume before they drop off: around 50ml at a time.

These days, medicinal leeches aren’t gathered by ladies wading barelegged through muddy puddles but they’re born and bred in sterile laboratories. And if you go splashing in marshy ponds there’s not much chance of a leech latching on. European medicinal leeches remain extremely rare in the wild. It was thought they’d gone extinct in England until 1975 when a dog leapt into a pool in Romney Marsh in Kent and came back with a rare hitchhiker. And while they no longer have to contend with bucket-wielding leech collectors, there are many modern threats including drainage of waterways that leeches lurk in. To make matters worse, life hasn’t been easy for wild leeches since the invention of the tractor: their favourite food used to be the blood of farm horses.

Science writer Helen Scales there with the chemistry of hirudin. Next week, a chemical investment.

Christina Piper was 27 in the year 1700 when her husband Carl went out to war with the Swedish King Charles XII, never to come back. He left her running his affairs and raising a family of four small children. Nine years after his death in 1716, she made an investment that would have long lasting effects visible to this day.

And find out what that investment was by joining Lars Öhrström in next week’s Chemistry in its Element. Until then, thank you for listening, I’m Meera Senthilingam.