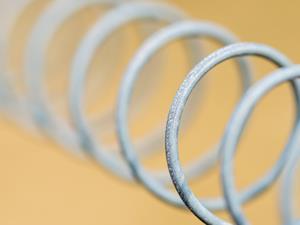 RNA may be less famous than it’s more stable cousin, but is central to cellular function

This week, the other genetic code. Andrew Holding…

RNA, short for ribonucleic acid, is the less famous cousin of deoxyribonucleic acid, or DNA. This, as you will probably be aware, stores our genes in a series of nucleotide bases, often represented as the letters G, A, T and C and forms the iconic double stranded helix. RNA is very similar in many ways: it too is made up of four bases attached to a backbone, although in RNA the ‘T’ (thymine) is replaced by ‘U’ (uracil) and the backbone is made of ribose sugars. Much like DNA, it is used by the body to encode information. Yet unlike DNA, the chains of RNA are generally single stranded. Further, the small chemical difference in the structure of RNA that distinguishes it from DNA, just the presence of a hydroxyl group on the sugar backbone, makes RNA far less stable than its counterpart. 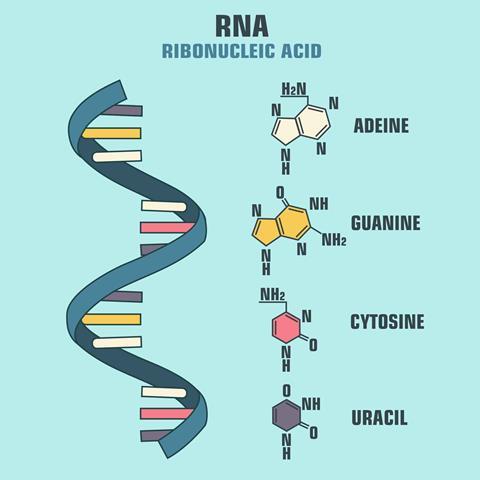 Most life stores information in DNA which is stable and able to preserve the organism’s genome. But in the case of some viruses, RNA is used to store the genetic information. In the case of these viruses, the instability of RNA can actually be advantageous as it allows for the rapid mutations that provide variation and fuel their rapid evolution.

Within a cell, RNA is found in three main types: messenger (mRNA), ribosomal (rRNA) and transfer (tRNA). These are involved in one of the most crucial functions of all living cells: converting genetic information into proteins that carry out essential functions.

The first step in the synthesis on a protein is the transcription, or reading of a gene from the DNA. This is carried out by an enzyme called the RNA polymerase, which copies a gene from the DNA sequence onto a short piece of mRNA. The mRNA is then read by the ribosome (itself made in part from rRNA.) Using the information on the mRNA, it then pieces together the correct amino acids into a chain to make the correct protein.

Each amino acid is delivered to the ribosome attached to a tRNA. This tRNA contains a loop that is specific to the amino acid that it carries, and is matched to the part of the mRNA currently being read by the ribosome. Then, the mRNA is shifted along, allowing for the next tRNA to be matched up. The same piece of mRNA can be read multiple times to produce several copies of a protein until it degrades. This allows for the cell to control when and for how long it makes a particular protein.

So RNA performs a bewildering array of roles as part of the machinery of the cell, and these are just some of the many functions of RNA. In fact, this system is so complex that it has led to the hypothesis that there was a previous RNA world – before the current DNA, RNA and protein system existed – whereby the information was stored and chemistry was all carried out by just RNA.

Phil Holliger, a researcher at the MRC Laboratory of Molecular Biology, has been trying to make an RNA molecule that can make another RNA molecule, an ‘RNAzyme’. His work has suggested that life could have perhaps started in cold pockets of water in ice, rather than in roaring hot thermal vents in the oceans. These low temperatures have the advantage that it would stabilise the RNA. In the lab, his group has mimicked these conditions by building ice columns and, in small water gaps between the ice, it has been possible to show that their own small RNAzyme could catalyse in these conditions. The small molecules could then keep replicating, and over time small changes would occur. If these changes to the RNA made it a better RNAzyme, then it would start to outcompete the other other RNA molecules, thereby very slowly allowing life to form.

So watch this space. The life forming chemistry of RNA there, with Andrew Holding, from the Medical Research Council’s laboratory of molecular biology. Next week, some hope for those listening in the early hours.

Who has not lain awake feeling the dawn’s slow approach, exhausted but unable to slumber? Alcohol and opiates have been used as sedatives since ancient times, and in Nietzsche’s age, toward the end of the 19th century, Justus von Liebig’s chloral hydrate was a widely used sleeping aid. A new molecular Morpheus had been discovered and was itself lying dormant, waiting for its hypnotic potential to be awakened: barbituric acid.

Phil Robinson explains the chemistry behind this awakening, which in turn hopes to have quite the opposite effect on the body, in next week’s Chemistry in its Element. Until then, thank you for listening, I’m Meera Senthilingam.