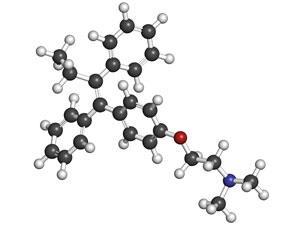 Tamoxifen can treat and prevent one type of breast cancer, without the side effects of chemotherapy. Andrew Holding explains more

This week, Andrew Holding investigates a drug to fight a common form of cancer.

Breast cancer is the most common type of cancer in the UK; and in about 70% of all breast cancer cases, the female sex hormone oestrogen drives the growth of the tumour and the division of cells. These cancers are called oestrogen receptor or ER positive. The oestrogen receptors allow for a cell to respond to oestrogen in the body, by locking onto the oestrogen molecule and then binding to the DNA in the cell before activating or deactivating genes. Usually this is not problematic: hormone level changes in the body will cause the cell to do what it needs to do; for example, to prepare the body for a possible pregnancy, which involves growing and dividing cells. However, in breast cancer the ER’s role (switching on the genes that are involved in the proliferation, growth and division of cells) drives the growth of cancer cells. This in turn causes a tumour to grow. Therefore, when treating these cancers, we want some way to block or slow this from occurring, allowing for us to limit the growth and size of the tumour. 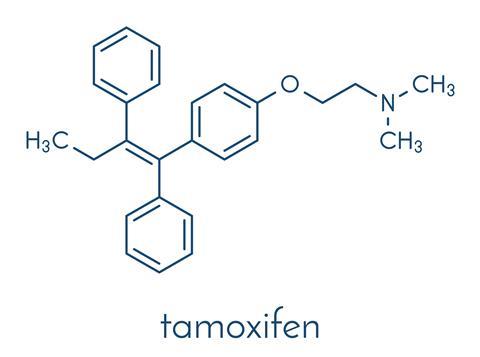 This is the role of tamoxifen when used in the treatment of ER positive cancers. Tamoxifen is a prodrug, a molecule that is converted into its active form when absorbed into the body. In this case, it is converted by the liver into hydroxytamoxifen. This product is then able to act like oestrogen and bind into the same receptor, but with one important difference: unlike oestrogen, the ER does not then go on to activate the genes that stimulate the cells to divide and grow. Therefore, it works much like a broken key in a lock, blocking the actual key from unlocking the door, or in this case, stopping the genes from switching on. Compared to very broad-acting alternative treatments like chemotherapy, a drug like tamoxifen has the major advantage that it is much more targeted to the cancer that is being treated. This means we can avoid the side effects associated with the treatment of cancer by chemotherapy.

In June this year, it was found that tamoxifen had long-term benefits too. A study showed that patients with oestrogen receptor-positive breast cancer that continue taking tamoxifen for 10 years are better protected against recurrence of the disease than those who take it for 5 years. There had been fears that longer periods on the drug might lead to increased risks, but the study concluded that doubling the length of time spent on the drug gave benefits that greatly outweighed the risks.

Around 1 in 20 people diagnosed with breast cancer may have an inherited BRCA mutation, a mutation in the BRCA 1 or BRCA 2 genes, known to increase risk of breast cancer. The use of tamoxifen as a preventative drug for those carrying these mutations was given the go-ahead in the UK this year. Several countries offer genetic screening for those who have a strong family history of breast cancer. If the mutations are present then several options are available. Until today, women carrying the genes could choose to have annual screening, to ensure any tumours are picked up at an early stage, or they could opt to undergo pre-emptive surgery. Today, a five-year course of tamoxifen is given as an alternative, and has been shown that it can reduce the incidence of cancer by as much as 40 percent.

One of the best known quotes from a movie occurs in a film about the Vietnam War, Apocalypse Now: ‘I love the smell of napalm in the morning’ - spoken by the actor Robert Duvall in the part of Lt Col Bill Kilgore. Napalm has come to be associated with its use by the American and South Vietnamese forces during the Vietnam War, but its origins go further back.

Discover how far back by joining Simon Cotton in next week’s Chemistry in its Element. Until then, thank you for listening, I’m Meera Senthilingam.