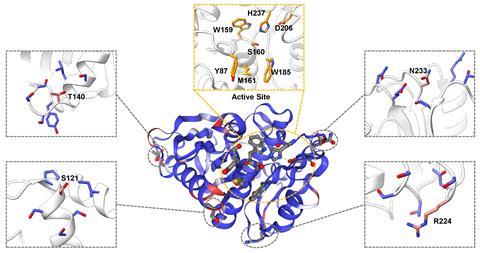 A plastic-degrading enzyme enhanced by amino acid changes designed by a machine-learning algorithm can depolymerise polyethylene terephthalate (PET) at least twice as fast and at lower temperatures than the next best engineered enzyme.

Six years ago scientists sifting through debris of a plastic bottle recycling plant discovered a bacterium that can degrade PET. The organism has two enzymes that hydrolyse the polymer first into mono-(2-hydroxyethyl) terephthalate and then into ethylene glycol and terephthalic acid to use as an energy source.

One enzyme in particular, PETase, has become the target of protein engineering efforts to make it stable at higher temperatures and boost its catalytic activity. A team around Hal Alper from the University of Texas at Austin in the US has created a PETase that can degrade 51 different PET products, including whole plastic containers and bottles.

A neural network helped the team decide how to modify the protein scaffold. The algorithm was first trained on 19,000 proteins of similar size, though of very different functionalities. For each of PETase’s 290 amino acids, the program checked whether it fits well within its immediate structural environment compared with other proteins. An amino acid that isn’t a good fit may be a source of instability, and the algorithm suggests a different amino acid in its place, Alper explains.

Alper says that machine learning is becoming more and more powerful when it comes to identifying the effects of altering amino acids outside the active site. This means it can balance the evolutionary trade-off between activity and stability.

Out of the millions of possible combinations, the researchers zeroed in on three suggested amino acid substitutions. Combined with two modifications from a previous PETase engineering effort, they designed an enzyme that is ‘highly, highly active, especially at lower temperatures, compared to anything else that’s out there’, Alper says.

At 50°C, the enzyme is almost twice as active in hydrolysing a small sample of a PET food container than another engineered PETase at 70°C. The enzyme even depolymerised an entire plastic cake tray within 48 hours, and the team showed that it can make a new plastic item from the degraded waste.

‘What I really liked in their study is the fact that they also they took it outside of the lab to some extent,’ says Sarah Kakadellis, who studies the plastics bioeconomy at Imperial College London, UK. Instead of only trying the enzyme on amorphous PET films from a lab supplier, Alper’s team used small pieces from PET products bought at the local supermarket.

‘It’s a drastic improvement compared to other enzymes that have been developed so far,’ Kakadellis says. But like other enzymes, it struggles with more crystalline plastics. To degrade highly crystalline PET bottles, Alper’s team melts the bottles to make the plastic amorphous.

‘This study … proved the machine-learning method is useful in enzyme engineering,’ says Bian Wu from the Chinese Academy of Sciences, whose team created a different modified PETase in 2021. The algorithm, he points out, managed to uncover certain modifications that were ignored by other methods. While Wu is impressed with the new PETase’s effectiveness, he cautions that the enzyme’s optimal working temperature of 50°C ‘is neither suitable for high-temperature degradation – [it] should be somewhere near the glass transition temperature of PET – nor can it meet the needs of in-situ degradation’.

Whether enzymatic depolymerisation will ultimately be used for large-scale recycling remains to be seen. Most PET worldwide is recycled not by depolymerisation but by melting and reshaping – but its properties deteriorate with each cycle. There are some chemical depolymerisation methods, but these are usually highly energy-intensive.

‘The great advantage of enzymes is that they can be much more specific than chemical catalysts,’ Kakadellis explains. ‘It could be easier, in theory, to degrade a much more diverse waste stream using enzymes.’ Alper adds that degrading all the different plastics that end up in bins is one of the major challenges any recycling approach has to solve. His team is continuing to investigate the practical aspects of enzymatic recycling, as well as expanding to polymers beyond PET.

‘There are many other streams of plastic that are much harder to degrade because they’re not polyesters, they’re polyolefins,’ says Kakadellis. ‘The main thing is to curb the plastic stream at the front.’