‘We’ve never had a technology like Crispr before’: gene-editing moves into the clinic

When Jennifer Doudna and Emmanuelle Charpentier revealed that the bacterial Crispr–Cas9 antiviral defence system could be reprogrammed to edit genomic DNA they could scarcely have imagined the impact their discovery would have. One Nobel prize and a decade later treatments based on the technique are racing towards the clinic.

That impressive speed in developing Crispr from intriguing discovery to viable therapeutic tool is perhaps not surprising, given just how big an advance it represents in our ability to manipulate genes, says Fyodor Urnov, director of technology and translation at the Innovative Genomics Institute in Berkeley, California. ‘For pretty much the first 150 years of genetics we were like astronomers. We could see the stars and galaxies, but we could never fly to them, never touch them,’ he says.

Crispr is a one-and-done technology

Crispr, however, turned us into astronauts. As a myriad of Crispr-based therapies for illnesses as diverse as sickle cell disease, cancer and HIV/Aids have advanced through clinical trials over the past three years they have shown that it is feasible to edit a person’s genome to cure disease. ‘This idea itself is old,’ says Urnov. ‘But we’ve never had a technology like Crispr before.’ 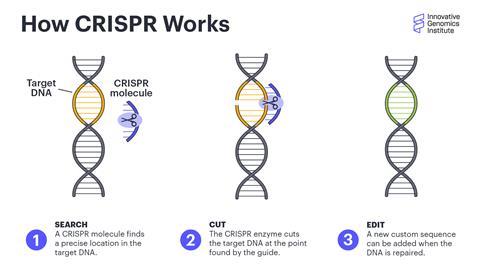 There are three main reasons why Crispr is such a promising and effective tool for developing new treatments, says Urnov. First, it is highly specific and easy to customise. It can be directed to essentially any gene of interest and should affect only that gene. Second, because it can rewrite the native genome, it has the ability to fix genetic diseases in a single dose. ‘Many of the diseases being targeted are treated by chronically administered medicines,’ he says. ‘Crispr is a one-and-done technology.’

Finally, Crispr is incredibly versatile. It can remove or fix defective genes, add missing ones, and more. Urnov himself is the co-founder of a biotech company, Tune Therapeutics, that is developing ways to use a modified form of Crispr to treat disease not by adding or removing genes, but by turning them on or off. ‘It’s not a one-trick pony,’ he says.

Examples of Crispr’s promise arrive frequently, as new clinical trials report their results. Most are still at an early stage, but the sheer breadth of diseases targeted, and the mainly positive results so far, mean it is easy to be optimistic about the future of this technique. 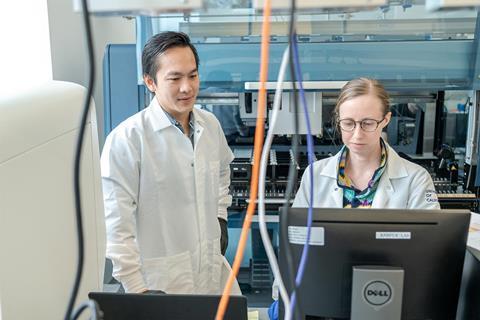 Jennifer Hamilton and Enrique Lin Shiao at UC Berkeley, where Jennifer Doudna, a pioneer in Crispr development, works. Crispr has moved from the lab to the clinic incredibly fast, driven by the myriad possibilities and its ease of use

In November, PACT Pharma reported results from a phase 1 trial of its Crispr-based T cell receptor (TCR) immuno-oncology therapy. TCR therapy is similar to the more common CAR-T cell immunotherapy, in which an engineered receptor protein that can bind to tumour cells is added to a patient’s T cells, but has the potential to be even more effective in personalised cancer treatment.

‘The big advantage is that TCR can recognise what is going on inside a cancer cell, not just on the surface,’ says Stefanie Mandl, chief scientific officer at PACT Pharma, so it can be used to target any number of mutations specific to a patient’s tumour.

Creating a personalised TCR therapy is a complicated process. First, Mandl’s team samples both the patient’s tumour and their healthy blood cells, and compares the genetic sequences of both to find mutations specific to the tumour. They then use an algorithm to predict which mutated proteins are most likely to be present on the surface of tumour cells. Those mutations are then used as ‘fishing hooks’, to trawl through the patient’s blood, looking for T cell receptors that can bind to them. Finally, the team uses Crispr to copy those receptors into large numbers of fresh T cells, which are then reinfused into the patient, where they can latch onto and kill tumour cells.

While the work is still at an early stage and will take several more years of development before it is widely available, Mandl says the early results show promise. Of the 16 patients who took part in the dose-escalation safety trial only two experienced significant side effects, and in five patients the disease stabilised.

The PACT TCR therapy is just the most recent Crispr therapeutic to report results. Many other research institutes and pharma companies are moving ahead with treatments for a wide array of diseases.

The furthest along the clinical pathway is a treatment for the blood disorders sickle cell disease and beta-thalassemia. Both of these are caused by a defective form of the gene that produces haemoglobin in red blood cells, and a Crispr-based drug called exa-cel, developed by Crispr Therapeutics and Vertex Pharmaceuticals, has shown great promise in curing both diseases with a single dose.

Exa-cel works by editing a patient’s blood stem cells with Crispr to switch on the foetal version of the haemoglobin gene, which is not affected by either disease. Once chemotherapy wipes out the diseased stem cells in the body, the edited ones are reintroduced to take their place in the bone marrow, where they produce new red blood cells with healthy foetal haemoglobin. 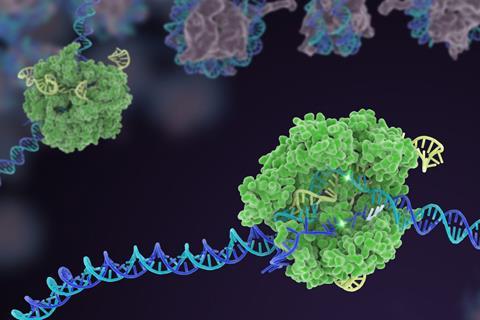 Phase 1 trials started in 2019, and so far 75 patients with either sickle cell disease or beta-thalassemia have been treated. Almost all have been essentially cured of their disease, with a very small number of adverse side effects. Phase 2 and 3 trials are ongoing, but the companies plan to apply for approval from the US Food and Drug Administration and European Medicines Agency soon.

‘This is unprecedented,’ says Urnov. ‘It’s extraordinary that they’ve managed to get this much done in such a short window of time.’

Both the PACT Pharma and the Vertex/Crispr Therapeutics treatments are done ex vivo, meaning a patient’s cells are removed from the body, modified with Crispr, and then returned. Other companies are pursuing the more direct – and challenging – route of delivering Crispr in vivo, to fix the problem inside the body itself.

One such company is Intellia Therapeutics. They have two drug candidates, NTLA-2001 and NTLA-2002, in early-stage clinical trials for transthyretin amyloidosis (ATTR), a protein folding disorder that affects the nerves, heart, kidneys and eyes, and hereditary angioedema, which causes severe, unpredictable swelling in various parts of the body.

We’re using Crispr for the same purpose it evolved in nature, to defend against a virus

Each condition is caused by a mutation in one gene, and the drugs work by using Crispr to knock out the mutated gene, reducing the circulating levels of the defective protein. The drugs are infused directly into the patients, with the Crispr machinery encased in lipid nanoparticles that are preferentially taken up by the liver, the organ where the genes are most active.

The ongoing phase 1 trials of both drugs have shown good safety profiles so far. In vivo Crispr treatments have a higher risk of side effects from the gene editors accidentally targeting the wrong site in the genome, but the adverse events seen so far have all been mild.

Ian Karp, Intellia’s senior vice president for communications, says the studies have also shown that the drugs can significantly reduce the amount of the offending protein, to levels unachievable with existing drugs. And the Crispr drugs have the advantage of being a one-time treatment, instead of requiring repeated infusions every few days or weeks.

Crispr is also being developed into treatments that target not faulty versions of our own DNA, but foreign invasions as well. Excision Biotherapeutics is testing a treatment for HIV that has the potential to cure the infection with a single dose. ‘We’re using Crispr for the same purpose it evolved in nature, to defend against a virus,’ says Daniel Dornbusch, the company’s chief executive.

The treatment works by using Crispr to seek out the retroviral DNA that has integrated itself into the genome of lymphoid cells and remove most of it, essentially eliminating HIV from the cell. Although it is administered systemically, Dornbusch says the risk of off-target effects is low. The drug was designed to target viral DNA with a very different genetic sequence to human genes, so there is little chance of a mismatch. So far, the company has not seen any evidence of off-target effects either in vitro or in animal models, he says.

Excision has now started a phase 1/2 clinical trial. The study is primarily focused on safety and biodistribution – does the drug get to the right tissues, and does it cut the right DNA – but it will also assess whether participants are able to stop taking antiretroviral drugs without seeing the disease rebound. Dornbusch says the company plans to announce early safety and potentially some efficacy data sometime in 2023.

Urnov says that these examples, along with the many other treatments in development, show that Crispr is well on its way to becoming a mainstream therapy. There are more than 5000 diseases caused by mutations in a single gene, and Crispr could help deal with a huge number of them. ‘We’re on a clear path to have Crispr go from a treatment for a few rare genetic disorders, to more common ones, to ultimately prevention,’ he says.

There are still enormous challenges ahead. Overcoming the potential safety issues is one, but the biggest challenge will be health justice; ensuring that the benefits of Crispr are not restricted only to those who can afford them, or to diseases that are common enough to justify the investment with the promise of big returns for the company.

While Crispr has the potential to be much cheaper and more accessible than other gene therapies, which can cost anywhere from $500,000 (£406,000) to $3.5 million a year per patient, the first Crispr drugs will probably still have eye-watering price tags. Urnov expects Vertex and Crispr Therapeutics to price their sickle cell disease drug ‘somewhere north of $2 million’, which will create issues with access, as most people in the US with sickle cell disease do not have private health insurance.

‘If Crispr medicines are priced at $3 million, then they will only be developed for diseases with a reasonably sized patient population,’ says Urnov. ‘But there are 6000 rare genetic diseases – who is going to develop cures for them?’

But despite these challenges, says Urnov, the promise of Crispr to be a revolutionary new therapeutic technology is unparalleled. ‘Crispr is not an incremental advance, it’s a fundamentally different way to attain a goal,’ he says. ‘It’s not a better mousetrap – Crispr is a cat.’