Company claims 90% efficacy at preventing disease, but experts call for data rather than press releases

Interim analysis of phase 3 clinical trial results from Pfizer and BioNTech’s mRNA-based Covid-19 vaccine suggests it is around 90% effective at preventing the disease. While the results have garnered effusive headlines worldwide, experts warn that they need to see more data to better evaluate the vaccine candidate.

‘This is very encouraging news, but tempered by the fact that it’s a press release,’ says Gregory Poland, vaccine scientist at the Mayo Clinic in Rochester, US. ‘They’re reporting a very narrow sliver of data,’ he says, and it leaves a lot of questions unanswered. 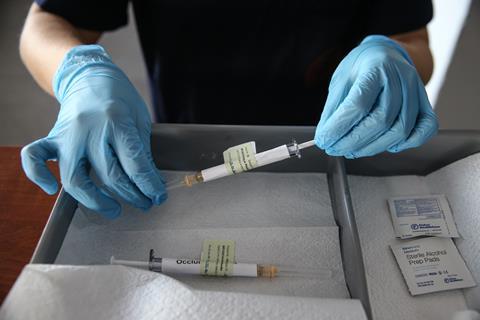 The mRNA vaccine seems to offer good protection against developing Covid-19, but many questions about details such as demographic differences and asymptomatic transmission remain

The trial has picked up 94 cases of mild to moderate Covid-19 among the more than 40,000 trial volunteers, ocurring more than seven days after the second dose of either vaccine or placebo (by which time the vaccine’s protection should be fully developed). The number of cases in the vaccinated group was about one-tenth the number in the control group, meaning that the vaccine reduced the incidence of the disease by about 90%.

‘Everyone was expecting around 50– 60% efficacy, so 90% is good,’ says Poland. But he adds that the context is lacking, as the full data have not yet been released. Byram Bridle at the University of Guelph, Canada, agrees: ‘We have no idea what the cases look like or what their demographics are,’ he says. If all Covid-19 cases in the vaccinated group were in elderly individuals, for example, this would suggest that the vaccine doesn’t work well in those who need it most. ‘We know nothing about its usefulness or safety in children, in pregnant women, in immunocompromised people, those taking certain medications, the oldest elderly or certain ethnic minorities’ says Poland.

Importantly, whether the vaccine protects against asymptomatic transmission is also unknown, notes Poland: ‘This is important because roughly half the cases are being transmitted by people who are asymptomatic.’ Vaccinated individuals may feel protected and relax protective measures such as mask wearing and social distancing. However, if infected they could still be capable of transmitting the virus, including to vulnerable individuals. ‘Some might be super spreaders, because unknown to them they might harbour the virus, not be sick, but infect other people,’ says Bridle.

How long immunity will last will only become clear after rollout. Also, Poland notes that vaccine trials are being conducted in conditions of social distancing and mask wearing, ‘but what is the efficacy of the vaccine without these measures? We don’t know.’

None of this takes away from the fact that the results are encouraging. ‘If the trial continues on this path,’ says Bridle, ‘then it would almost certainly meet the requirements to receive regulatory approval, probably in early 2021.’ No mRNA vaccine for a human disease has ever been licensed, though the mRNA candidates were early frontrunners for Covid-19.

In its press release, Pfizer noted that the clinical trial will continue to final analysis when there are 164 confirmed cases of Covid-19 among participants. The company plans to apply to the US Food and Drug Administration (FDA) in the US for an Emergency Use Authorisation (EUA) after the required safety milestone is reached. This is expected in the third week of November.

Poland thinks the FDA might prefer to release the vaccine under an expanded access programme, rather than emergency authorisation. This involves providing it to a restricted group of people (such as the most at-risk and vulnerable populations) and continuing to study them. ‘I like expanded access because it preserves the integrity of other trials,’ says Poland.

Other vaccine trials could be compromised in the presence of an already authorised vaccine. Volunteers may not then want to enrol in a trial where they have a 50:50 chance of receiving a placebo. There are other arguments against EUA for a vaccine, given the lower standard of evidence required and the possibility of undue political influence.

Another issue with the Pfizer–BioNTech vaccine is that it must be stored at –80°C, making its transport and deployment difficult. It’s not impossible – the World Health Organization (WHO) had an Ebola vaccine in 2015 that needed to be kept super chilled – but it’s certainly challenging, as outlined by the WHO’s special envoy for Covid-19, David Nabarro, in a recent radio interview.

The Pfizer press release spurred headlines touting ‘a watershed moment’, ‘a great day for humanity’ and ‘life back to normal by spring’. Poland cautions that there is a danger that people only see the 90% headline and then get angry if the vaccine does not perform as well as that, or it doesn’t materialise in the way they expect.