Amphotericin, an antifungal drug that can punch holes in cell membranes, could replace the broken ion channels in cystic fibrosis patients’ lung tissue.1 Tests in cell cultures and pigs engineered to display symptoms of the disease showed that the compound restores the lung’s ability to release bicarbonate, which is essential for the organ’s functioning. The team behind the work is now pushing for clinical trials.

Cystic fibrosis (CF) affects one in 2500 newborns and is caused by a genetic defect that leaves patients suffering from breathing difficulties and chronic lung inflammation. The disorder drastically reduces the life expectancy of sufferers to around 47 years.

CF causes a defect in the ion channel protein CFTR, which sits in the lung’s lining. It prevents cells from releasing bicarbonate and chloride ions into the liquid underneath the uppermost mucus layer, which then becomes thick and sticky – a breeding ground for bacteria. There is no cure for CF, although in some cases drugs can partially restore CFTR’s function.

Chemist Martin Burke from the University of Illinois at Urbana–Champaign in the US and a team of biochemists, geneticists and physicians have now used amphotericin B, a macrocyclic polyene-polyalcohol, as an ion channel prosthesis to replace broken CFTR. Tests on human cell cultures and pig models of CF have shown promise: amphotericin was able to release the bicarbonate and chloride ions trapped in CF lung cells. In cell cultures, the effect lasted for seven days, whereas the animal experiments were only run for two hours. 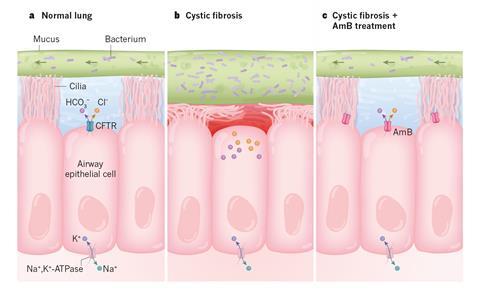 Amphotericin has an affinity for cell membranes and can punch ion-permeable holes in them. Scientists long thought this made it toxic in high doses. ‘In fact, that’s what’s in my textbook from when I was in medical school,’ says Burke. But it turns out that this isn’t true. Amphotericin kills cells by extracting sterols from their membranes. Burke’s team simply pre-complexed amphotericin with sterols to avoid this.

‘Overall it is impressive, but very surprising that it worked,’ says cellular physiology researcher Michael Gray from Newcastle University, UK. ‘No-one has opted to test a non-selective pore… Others have looked into using anionophores or small peptides but nothing really substantial has come of this work.’

In terms of raw functionality, amphotericin is much simpler than CFTR. While the latter is a selective bicarbonate and chloride secretor, the antifungal is an unselective channel for any and all monovalent ions. But that might be all that’s needed to recover CF lungs’ function.

‘There’s been a long standing expectation that you would need to perfectly replace a missing protein in order to get back to healthy,’ Burke says. ‘I think the most important finding of our study is that imperfect mimicry of a missing protein with a small molecule may in many cases be sufficient to restore physiology.’

Burke’s hypothesis is that the electrochemical gradient created by the cells’ other pumps and channels is sufficient to push the right ions through the amphotericin hole. ‘Other proteins can correct for its imperfections by pumping other ions back in the other direction,’ he explains. When the other pumps are blocked, amphotericin becomes ineffective.

‘It would be an approach for hard-to-correct CFTR mutations that do not yield functional protein in the cell membrane,’ says Beate Illek, director of the cystic fibrosis research laboratory at the Children’s Hospital Oakland Research Institute, US. There are 2000 different faulty versions of the CFTR-encoding gene, so around 15% of patients don’t benefit from drugs that encourage CFTR activity, Gray explains.

‘However, drug delivery in inflamed and infected airways is problematic, and the drug has to penetrate the sticky mucus layer,’ Illek says. During their tests, Burke’s team added amphotericin directly into pigs’ lungs through a tracheal window. Eventually, they hope to administer it via an inhaler. ‘Nebulised amphotericin has been given to people with CF already to treat fungal disease and in these cases, although there was some improvement in lung function, nothing dramatic was seen,’ Gray points out.2

Burke now wants to conduct clinical trials. Since amphotericin is already approved as a drug for fungal infections, he hopes to find ‘a very fast and safe way’ to test its efficacy.

‘But as excited as we are about the study, it’s really important to point out that it remains to be seen whether this can be helpful for people with CF,’ Burke says.