Researchers in the US have developed a new method for making site-selective modifications to natural product molecules. The technique makes use of super-electrophilic silylium ions, and facilitates a range of different chemical transformations.

The team behind the work hope that it will enable medicinal chemists to quickly produce new variants of bioactive compounds, helping them to investigate how molecular structure influences biological function.

Directly modifying natural products is challenging, especially because these compounds usually contain functional groups that can interfere with synthetic attempts to alter their structures. However, the catalytic approach developed by Michel Gagné and his colleagues at the University of North Carolina enables chemoselective reactions on complex molecules, despite requiring surprisingly reactive reagents.

Combining silanes with fluoroarylboranes produces highly electrophilic silylium ions that are paired to reducing counterions. These aggressive species can activate functional groups on natural product substrate molecules. Gagné’s team discovered that carefully selecting the borane, silane and, where necessary, the phosphine additive allowed them to control which site they activated, facilitating a wide range of reduction reactions. 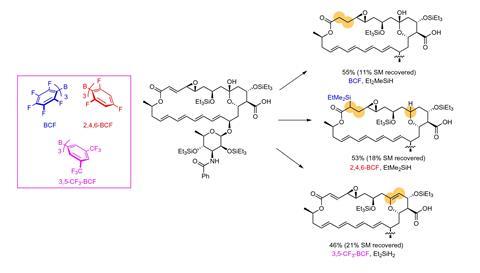 Manipulating the catalyst, silane reagent and reaction conditions provides experimental control over which site is modified (and how)

The team used the method to modify several biologically relevant molecules, including an antimalarial compound and a precursor to the chemotherapy drug taxol.

The work ‘marks the current pinnacle of implementing highly electrophilic boron Lewis acids in synthesis’ according to Martin Oestreich, an expert on silicon and boron catalysts from the Technical University of Berlin, Germany. He says that while fluoroarylboranes are often considered too reactive for chemoselective functional-group manipulation, the new study proves that it is possible. ‘As demonstrated for several bioactive compounds, this technique enables expansion of the diversity space of each of these. I consider this a major advance,’ he adds.

Rohan Davis, an expert on the isolation and semi-synthesis of bioactive molecules based at the Griffith University, Australia, is also impressed by the work: ‘This newly developed late-stage chemoselective methodology will no doubt have great appeal to synthetic, medicinal, and natural product chemists alike,’ he says. Davis adds that he is looking forward to the future application of this ‘unique chemistry’ and hopes that it ‘may assist in the renaissance of natural product drug discovery and chemical biology endeavours around the world’.

Looking to the future, Gagné explains that his team are now looking to develop algorithms to better predict the types of transformations their technique can bring about. ‘We are of course very interested in catalyst variations that diversify further what sites are hit and how they are modified,’ he says.