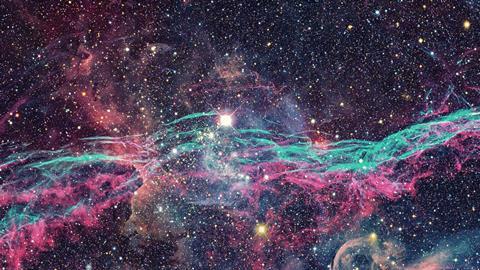 How did carbohydrates form in space and on early Earth? The clue might be in the carbene

A highly reactive molecule might solve the puzzle of how sugars formed in interstellar space and on prebiotic Earth. Even under space-like conditions – without water and at ultralow temperatures – the carbene compound reacts to form simple sugars, researchers have discovered.

In 1861, a few years after discovering formaldehyde, the Russian chemist Alexander Butlerov realised that it reacts into sugars when he added water and a base. This formaldehyde oligomerisation reaction became known as the formose reaction. Until today, it remains a cornerstone of prebiotic chemistry to explain how sugars – basic building blocks for biological molecules such as RNA – formed on early Earth.

In the laboratory, however, the formose reaction produces a useless black tar – a wild mix of sugars and polymeric compounds – after only a few hours. ‘Ribose is highly unstable under the conditions of its formation,’ explains prebiotic chemistry researcher Saidul Islam from University College London, UK. But to be relevant to life, molecules have to stick around for more than mere hours. So how exactly prebiotic sugars formed – and why some interstellar clouds contain them – remains a mystery.

Now, Peter Schreiner and his team Justus Liebig University, Germany, might have found a clue in a hydroxymethylene, a hyper-reactive carbene they first proved to exist 10 years ago. Without water or any other solvents and at temperatures close to absolute zero, it joins with formaldehyde to produce glycolaldehyde and glyceraldehyde. These sugar precursors can react further, eventually forming ribose and other higher carbohydrates.

To make hydroxymethylene, the team ran glyoxylic acid molecules through a red hot quartz tube. They then trapped the breakup products in solid argon at 3K (–270°C) where it could react with formaldehyde.

In space, Schreiner explains, hydroxymethylene could form through a reaction between carbon dioxide and water. ‘We believe that the reaction not requiring aqueous conditions is superior to anything that has been suggested in the past,’ he says. ‘I call this carbohydrate formation in the absence of biosynthesis.’

Whether the discovery can explain sugar synthesis on Earth as well as in space remains to be investigated. ‘What Schreiner has shown is a complementary route to glycolaldehyde and glyceraldehyde that could happen in space,’ says Islam. ‘But once the glyceraldehyde has formed, it eventually has to get into some kind of aqueous environment for subsequent chemistry.’