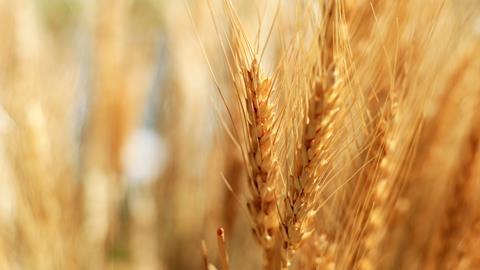 Brian Clegg on the enzymes make life a little sweeter by breaking down starch into sugars, helping to make bread and beer

This week, Brian Clegg breaks down an enzyme, to make it easier to digest…

The ‘ase’ ending to ‘amylase’ singles it out as an enzyme (a complex organic catalyst, usually a protein). This naming convention was begun by French chemists Anselme Payen and Jean-François Persoz back in 1833, when they noticed that a newly discovered substance broke down starch in barley, separating the husk from the seed. They commented that its ability inspired them to call the substance diastase ‘qui exprime précisément ce fait’. The reason diastase expresses this fact precisely, as they put it, is because it was derived from the Greek diastasis, meaning separation. 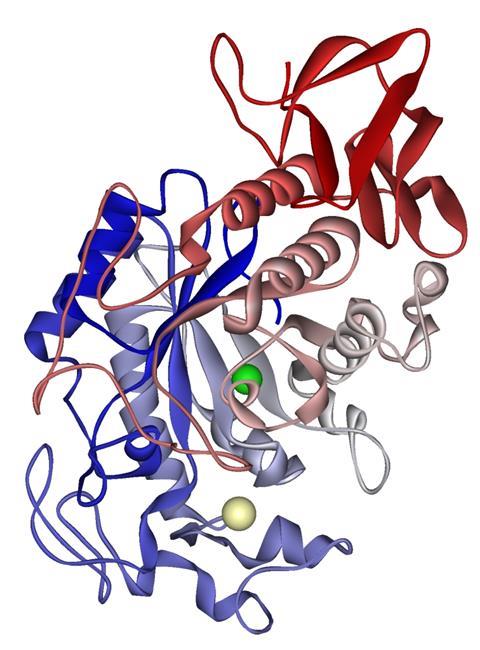 This first enzyme to be discovered gave its ‘ase’ ending to the rest, while diastase became a bracket term for a number of enzymes catalysing the conversion of starch into sugars, including the subject of this podcast: Amylase. Here, the nature of the separation is highlighted, as ‘amylum’ is the Latin for starch.

This is a seriously chunky molecule. Visual representations of amylase look like a massive blob or tangle – it is a single chain of 496 amino acids, folded up as is typical of a protein.

Spit a drop of saliva onto your finger and you are looking at a solution containing amylase. Some mammals, humans included, have amylase in their saliva to help break down foodstuffs – it’s the job of that amylase to get started on the carbohydrates in starchy foods, splitting them into component sugars.

Technically speaking, your spit contains alpha-amylase, also known as ptyalin. There are three very different major amylase enzymes, which all break the same kind of bond linking sugars in starches, impacting different parts of these long chain molecules. Beta-amylase is only produced by plants, bacteria and fungi, and is partly responsible for our enthusiasm for fruit: as a fruit ripens, this enzyme breaks down starch into sugars, increasing the fruit’s sweetness. Gamma-amylase, limited to animals and plants, is produced in animals’ small intestines, while alpha-amylase turns up in saliva and the pancreas. In total, 19 members of the amylase family have been classified, mostly from microbial sources.

The level of amylase in your saliva is likely to differ depending on regional DNA variation. The gene responsible for the protein production repeats in our DNA, but in areas with long-term, high-carbohydrate diets, the repeat occurs more frequently – in Japan, with a history of rice consumption, for example, there can be more than twice the number of copies of the gene, and hence more amylase in the saliva, compared with a country with a low starch diet. 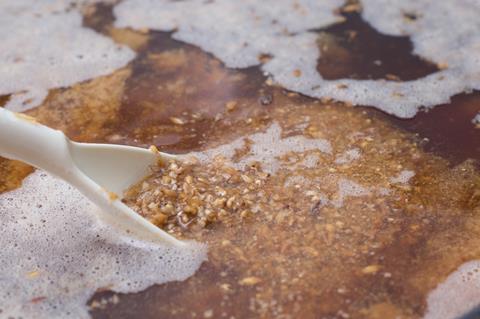 Outside the body, amylase is essential for brewing beer, usually, in a mix of alpha and beta forms from malt. This is a grain, most often barley, which is doused in water to allow it to germinate. As the seed starts to grow, it produces amylase to liberate sugars to nurture the growing plant, but the amylase is preserved by heating or smoking the sprouting grain. The malt is then soaked in hot water so the enzymes go to work on the remaining starch – depending on the temperature, alpha or beta amylase can dominate, leading to a different mix of sugars, which are then fermented using yeast.

Some early processes for producing alcoholic drinks used amylase from saliva instead of malt. Here the grain was chewed before spitting it into water to ferment. Perhaps best-known is the beer from South and Central America, usually produced from maize, known as chica, but the process was historically used everywhere from Japan in making sake (which despite being called rice wine, is technically a high alcohol beer) to the African millet beer, pombe – though in all cases, malting is now the norm.

In the west, bread and beer were the staple food and drink before modern times: the production processes of the two are closely related. In each case, amylases break down some of the starch in processed grains before yeast converts sugars to alcohol – though for bread purposes, the alcohol content evaporates during baking and it’s the by-product of carbon dioxide that’s important to make the bread rise. In traditional breadmaking, the amylase only comes from yeast, resulting in a slow process, but flour treatment agents containing amylase are now often added to speed up the bread production. 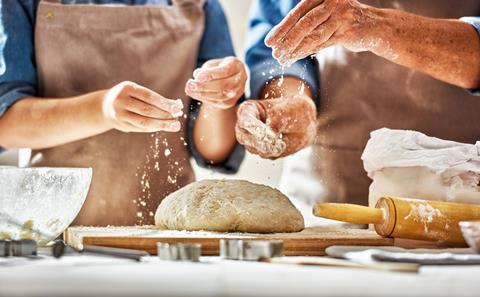 Alpha-amylase also turns up in biological detergent. The distinction between ‘bio’ and ‘non-bio’ is the inclusion of a range of enzymes to break down grease, carbohydrates and more. Amylase, of course, goes for the starchy stains, such as gravy, chocolate and ice-cream, breaking parts of large insoluble molecules into soluble sugars.

Once humans developed the capability to produce amylase in their saliva, it helped them get more out of their food – but this was only the start for an enzyme that brings us our daily bread, an enjoyable glass of beer and even clean clothes. It may not save lives, but amylase certainly makes life more palatable.

That was Brian Clegg with amylase. Next week it’s my turn again – and I’ll be celebrating the birthday of a Nobel laureate – Carl Peter Henrik Dam, who shared the 1943 prize in medicine for his role in the discovery of vitamin K. Until then, find all of our previous podcasts at chemistryworld.com/podcasts, and get in touch with any suggestions – email chemistryworld@rsc.org or tweet @chemistryworld. I’m Ben Valsler, thanks for joining me.