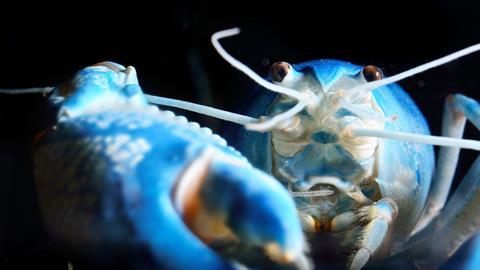 Colourful crustaceans and the story of a ubiquitous biological pigment

This week, the chemistry of an extremely unlikely lobster. Here’s Mike Freemantle.

In May 2017, newspapers in Ireland reported that a bright blue lobster had been caught in the sea near the coast of County Sligo. The chance of catching such a creature is one in two million, the papers noted. The lobster was taken alive to an aquarium in Achill, a large island in County Mayo. There, it joined a rare orange lobster caught off the Galway coast and a ‘one in a million’ white lobster that had been trapped in pots off the coast of Mayo earlier in the month. 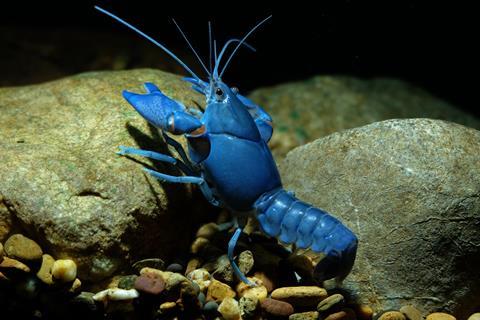 The species of lobsters living in the sea off the west coast of Ireland are known as European or common lobsters. The shells of the vast majority of these are coloured blue-black. It is only when they are cooked that the shell colouring changes to the familiar orange-red.

The differences in shell colour stem from astaxanthin, a type of organic pigment known as a carotenoid. When isolated, the compound is a red powder. In the shell of a live lobster, a protein wraps around molecules of the compound to form a blue-black complex called crustacyanin. On cooking, the protein unravels releasing the red astaxanthin pigment that gives the lobster its distinct colour on the dinner plate.

So how to explain the colours of the white, bright blue and orange lobsters in the Achill aquarium? Scientists who research the colours of lobster shells postulate that the unusual colours are caused by variations in the structure and concentration of the astaxanthin-protein complex. However, investigations have been limited by the scarcity of these rare lobsters.

The bright blue colour probably arises from a marked change in the concentration of the protein complex in the shell. The orange colour could be due the presence of low concentrations of free astaxanthin that have not been able to form a complex with the protein. As for the white lobsters, the complex is probably totally absent in their shells. 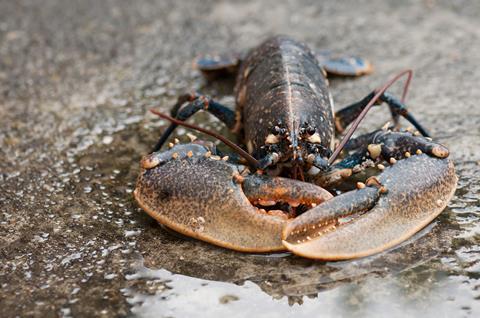 The unusual colours are almost certainly caused by genetic mutations, but that alone does explain the rarity of these lobsters. Cod and other fish love to feast on lobsters, just like humans. The blue-black shells of most common lobsters, however, provide camouflage in the rocks and mud of the ocean floor. Brightly coloured lobsters, on the other hand, make easy targets for marine predators. They are therefore far more likely to be consumed in the sea than trapped in fishermen’s lobster pots and consumed in a restaurant.

Astaxanthin is ubiquitous in nature. It occurs in algae at the bottom of the aquatic food chain. The freshwater algae Haematococcus pluvialis is particularly rich in astaxanthin, and are used as food additives in aquaculture to give extra colour to the flesh of farm-raised trout and salmon. The pigment also occurs in krill, minute crustaceans found throughout the world’s oceans. The compound is notably present in the shells of shrimps and accounts for the pink and red colours of flamingos who enjoy feeding on them. 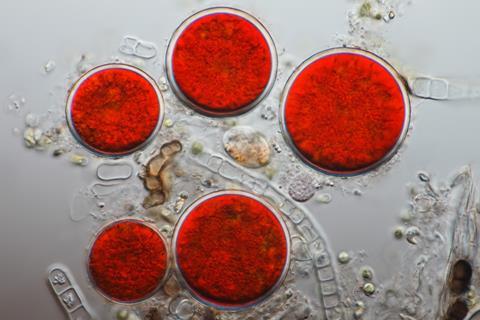 Astaxanthin is produced commercially not only as a food dye but also as a dietary supplement. It is a powerful antioxidant that scavenges free radicals in the body, and advocates claim that it can improve health in a number of ways. Some of the astaxanthin used for these purposes is derived from shrimp shell waste, and some from the Haematococcus pluvialis algae. However, most is produced synthetically.

Now back to our bright blue lobsters. Tradition has it that it is good luck to catch one. It is therefore customary for fishermen to toss these lobsters back into the sea. This is both good and bad news for the lobster. It is good news because it escapes the kitchen and the drop into the pot of boiling water. It is bad news because it is likely to become a target once again for those hungry marine predators. Unless, of course, it ends up in an aquarium for the rest of its life. 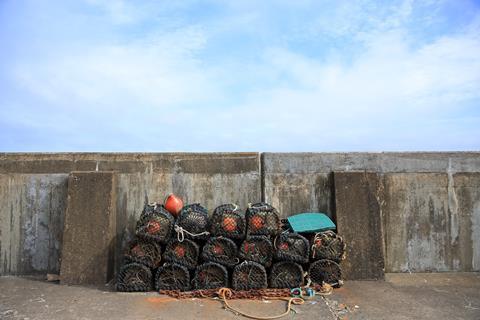 That was Mike Freemantle with the pigment astaxanthin and a one in two million bright blue lobster. Next week, Katrina Krämer looks at a toxic challenge for total synthesis.

As the largest natural product that is neither a protein nor a sugar nor any other kind of polymer, it contains mostly fused six-, seven- and eight-membered cyclic ethers – a synthetic chemist’s nightmare. Constructing – let alone reading out – its systematic Iupac name has never even been attempted.

Join Kat to learn more about the attempt to synthesise the extremely toxic marine compound maitotoxin in next week’s Chemistry in its element. Until then, thanks for joining me, I’m Ben Valsler.