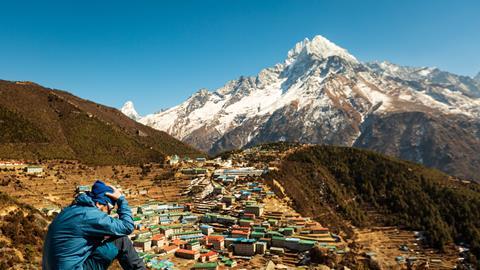 The oxygen sensors that help life react to changing conditions, key to the 2019 Nobel prize in physiology or medicine

We get very excited about the Nobel prizes at Chemistry World. Every year you’ll find the entire Chemistry World team – fully caffeinated and often armed with pastries – crowded around a screen showing the live stream from Stockholm. The chemistry prize is the big one, of course, but there’s always some discussion of, and hedged predictions for, the physics and physiology or medicine prizes. This year we saw neither of them coming, but the work behind the prize for physiology or medicine – awarded to William Kaelin Jr, Peter Ratcliffe and Gregg Semenza ‘for their discoveries of how cells sense and adapt to oxygen availability’ has some fascinating chemistry at its heart. 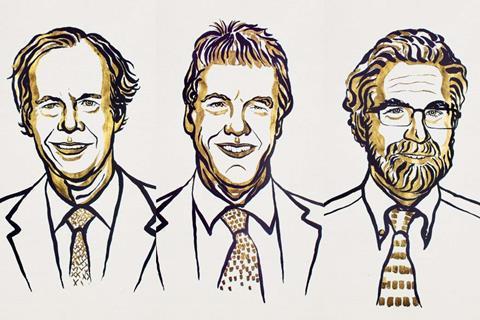 Oxygen is vital to myriad biological processes, and organisms respond to changes in oxygen availability in a variety of ways. If you’ve ever climbed a mountain at high altitude, (or for that matter, ever tried to do very much at all whilst at altitude) you’ll know that your body responds initially by changing heart and breathing rates . Everything is exhausting. After a few days, other mechanisms kick in and you begin to acclimatise, finding everyday exercise easier.

But altitude is not the only cause of low oxygen – hypoxia – that an organism may experience. Injury, stroke, anaemia, heart or lung disease can all reduce available oxygen, so understanding the biochemical and genetic response can do far more for us than making mountaineering a bit easier. 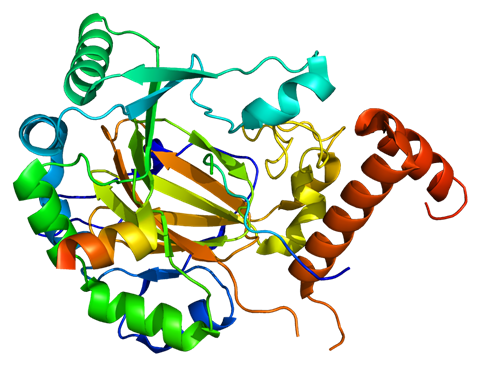 The quest to understand biology’s response to hypoxia led to the subject of a previous podcast: the hormone erythropoietin or EPO. Semenza and Ratcliffe both researched the genetic regulation of EPO production, and along the way discovered signalling molecules that modulate EPO gene transcription – the process by which DNA is ‘read’ and a corresponding protein produced. These became known as the hypoxia-inducible factors or HIFs. They’re a family of proteins, and so vital to sustaining life that the genes that code them are found in pretty much every oxygen-using species. We’re mostly talking here about HIF-1α, the first one discovered. 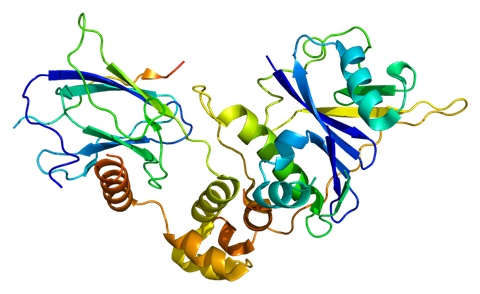 When there’s plenty of oxygen present, the so-called normoxic state, HIF-1α is fairly rapidly broken down. The subject of another previous podcast – ubiquitin – along with one we’ve not done yet –VHL, or the von Hippel–Lindau tumour suppressor – together identify the HIF-1α protein and mark it for degradation. VHL is where our third laureate comes in – Kaelin was investigating a type of inherited cancer – von Hippel–Lindau disease – and noticed that tumour cells with a malfunctioning VHL gene behaved as if they were hypoxic. Back to Ratcliffe, who put the two together (literally) to show that VHL combines with HIF-1α as part of the breakdown process. 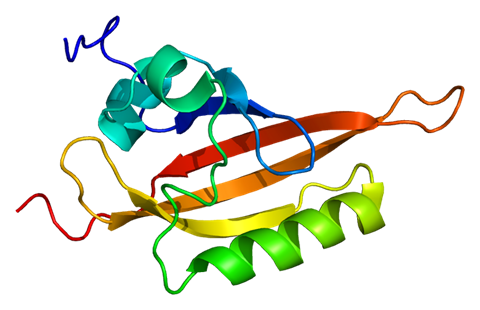 But this degradation only gets started after HIF becomes hydroxylated, which can only happen in the presence of oxygen. Remove or reduce the available O2, and HIF-1α is free to bind to HIF-1β (also known as ARNT, or aryl hydrocarbon receptor nuclear translocator), and together they interfere with specific regions of DNA. This changes the transcription rates of genes involved in a wide range of biological processes, from the upregulation of EPO to changes in metabolic rate and formation of new blood vessels.

And thus HIF-1α and its family act as oxygen sensors – altering cell behaviour in response to changing levels of O2. When you climb that mountain, cell concentrations of HIF-1α also rise. This causes the cell to make more copies of EPO, and so increases the oxygen carrying capacity of your blood. 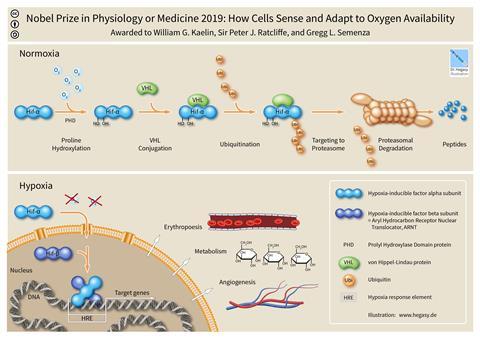 Of course, once we’ve identified a biological pathway, we can start to look for ways to interfere with it . Having elucidated this elegant biological feedback system, Semenza, Ratcliffe and Kaelin inspired a search for drugs that could either prevent HIF-1α from being dismantled or block its interaction with DNA.

One such drug, FibroGen’s Roxadustat, has very recently been approved in China and Japan for treatment of anaemia caused by kidney disease in patients who are not receiving dialysis. It works by blocking the initial hydroxylation, which prevents HIF-1α from being broken down and thus mimics hypoxia. Clinical trials showed increased mean haemoglobin level in patients compared to a placebo group, sustained for at least eight weeks.

Of course, anything that makes your body more efficient at carrying oxygen is going to be a tempting prospect for unsportsmanlike athletes, and HIF stabilisers have already been found in at least one case of suspected doping. As such, it’s already being included in drug screening for athletes.

Suppressing HIF activity also shows promise as a cancer therapy. One of HIFs roles is to increase angiogenesis – creation of new blood vessels. That’s vital in wound healing and the response to a heart attack, but if we can prevent it from happening in cancerous tissue, it’s possible to limit the amount of oxygen available and halt the growth of the tumour. Several existing drugs, including melanoma treatment trametinib and, surprisingly, a drug used to treat tapeworm infestation called niclosamide, have been shown to suppress cancer cell proliferation and slow blood vessel formation.

Given how ubiquitous hypoxia-inducible factors are throughout the body , and their importance in growth and development, healing, adaptation and disease, it’s easy to see why Kaelin, Ratcliffe and Semenza deserved the Nobel prize in physiology or medicine. Congratulations from us at Chemistry World! 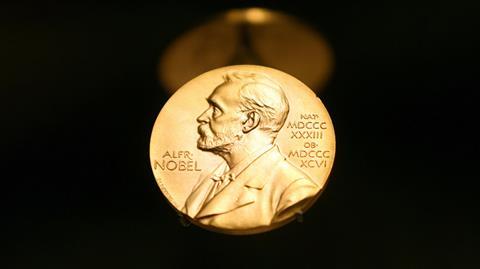 Next week, Georgia Mills returns with an alloy of two of our favourite metals.

If you won a Nobel prize in chemistry, the medal would be made from gold-plated electrum! This is fitting, as electrum’s parent elements, gold and silver, are themselves noble metals.

Join Georgia next time. Until then, get in touch with any compounds you would like to know more about: email chemistryworld@rsc.org or tweet @chemistryworld. I’m Ben Valsler, and you’ve heard a lot from me this time, so thanks for listening.