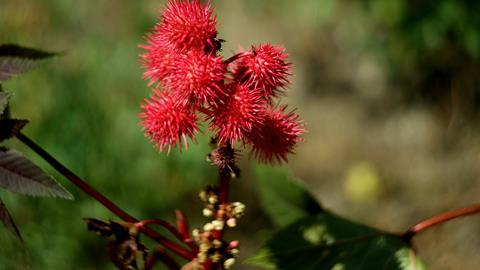 This week, beware of the poison lurking in the plant beneath you. Explaining its dangers is Neil Withers.

Ricin is a highly poisonous natural protein found in the seeds of the castor oil plant. It is thought that the plant makes the poison to ward off predictors because as soon as the seeds germinate, the toxin vanishes.

It is a highly effective poison, with just a tiny amount needed to kill: 10 castor beans are estimated to contain sufficient ricin to end the life of an average-sized adult. That said, simply swallowing the seeds wouldn't be enough, as the seeds' protective coating would allow them to travel through the gut relatively unscathed. Instead, the ricin needs to be extracted from the seeds, and even then ingestion is a much less effective method than inhalation or injection. If injected, just 200 to 500 micrograms of ricin is enough to kill: an amount small enough to fit on a pin head. 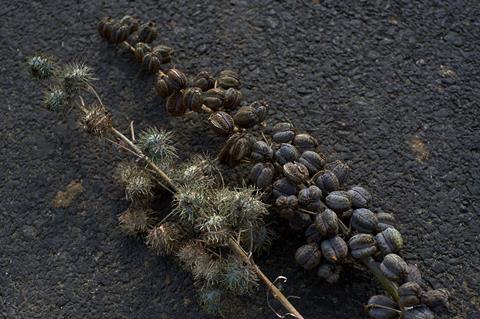 And a pin head is just the size of the ricin-laced bullet used in the assassination of Georgi Markov by the Bulgarian secret service in September 1978. Markov was a dissident who had defected to the West and the story of his death sounds like something from an Ian Fleming or John Le Carre book, not real life. The weapon used to fire the ricin bullet into the unsuspecting Markov's leg was an umbrella. Well, not a bog-standard brolly you might buy in the shops, of course, but an air gun or similar disguised as an umbrella.

Nevertheless, the disguise was so good that even Markov himself didn't realise anything untoward had happened during his encounter with his murderer. While walking by Waterloo station in London, he felt a sharp pain in his thigh, and turned to see someone innocently picking up a dropped umbrella from the pavement. It wasn't until after his death - of suspected acute blood poisoning four days later - that foul play was discovered. During his post-mortem the miniscule bullet was found and the poison inside identified as ricin.

Ricin has also found its place in the chemical warfare hall of fame, although thankfully only with a bit part. The US army began investigating its suitability during the first world war, but eventually decided that it offered them no advantages over the chlorine and mustard gases they were already using. It was examined again as a potential agent in the second world war, but once again dismissed as unsuitable. Its use in the 1980s during the Iran-Iraq war was suspected, but never proven. It has definitely been stockpiled for use in anger, with Iraq declaring 10 litres of ricin solution to the UN inspectors in 1995. In addition, quantities of it have been found in caves frequented by al-Qaeda in Afghanistan.

One of the reasons it has never been a 'popular' warfare agent is because there is no known antidote - a problem if one of your own soldiers is accidently exposed. The best that can be done is to treat the problems caused by poisoning, including extreme dehydration and organ failure. Fortunately, a vaccine is available for people at risk of exposure.

Ricin has unfortunately found its place as a tool for wannabe terrorists with the most recent case being the arrest of four elderly men in Georgia in the US in November 2011. They are accused of plotting to murder officials using ricin, and were arrested after traces of the poison were found in their possession. Over the past ten years, there have also been a number of high-profile cases of the powder being sent to government mailrooms in the US. 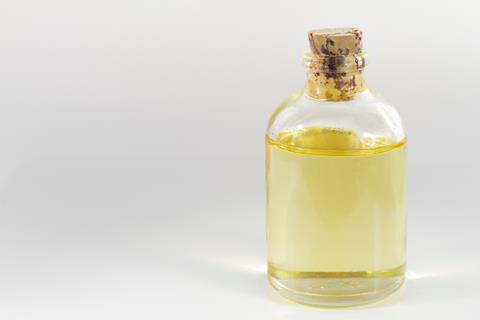 The poison, or at least the seeds, is relatively easy to get hold of, as the plant is grown in abundance for its oil. Castor oil is extracted from its seeds, and is used for preserving wood and leather, as well as for making brake fluids and other oils. Ricin can then be made from the leftovers after the seeds have been pressed for oil.

So, that's ricin, a deadly poison that thankfully found most of its popularly in murder mysteries, rather than real life - and long may that continue!

Yes, it's certainly better to read about it than experience it. That was Chemistry World's Neil Withers with the poisonous chemistry of ricin. Next week, a versatile compound that can be used to cook, eat and clean infections.

You are also likely to find vinegar in your store cupboard acting as a preservative. While brine can be used in pickling, the most popular approach for picking vegetables is to use vinegar, which ironically, given its bacterial origins, has the role of killing bacteria to preserve otherwise perishable food.

This tart liquid has also found its way onto the medicine shelves in a range of traditional cures and treatments, perhaps on the basis that anything that is shocking to the taste buds should be good for taking on disease. It was originally used widely to treat infections and is still used to reduce the pain of jellyfish stings. For those who are encouraged by the term 'natural' on a household product, vinegar can also be a useful cleaner to remove grease and mineral deposits and to de-rust iron.

And to find out the chemistry enabling this wide range of uses for vinegar, join Brian Clegg in next week's Chemistry in its element. Until then, thank you for listening, I'm Meera Senthilingam.