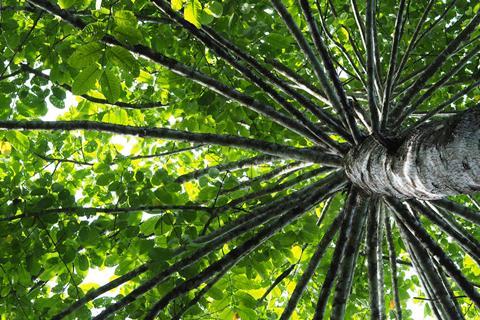 Quinine is made from the bark of the cinchona tree

A streamlined synthesis of the antimalarial (–)-quinine by researchers in Japan has showcased ‘pot economy’ as a sustainable organic strategy for chemical production. The team achieved the 18-step total synthesis in a five-reaction sequence, both reducing waste and saving time in their carefully designed process.

Quinine, an alkaloid extracted from the bark of the cinchona tree, is an important antimalarial and has been used to treat the disease for over 400 years. However, the complex chiral structure also makes quinine valuable to organic chemists, both as a chiral ligand and an asymmetric organocatalyst. Over the last 100 years, many different researchers have completed stepwise total syntheses of this challenging target, but the corresponding low yields have meant that synthesis has never replaced natural extraction. 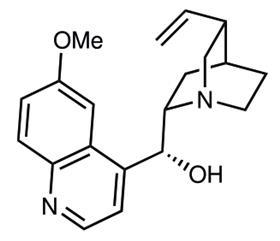 In a new streamlined approach, Yujiro Hayashi and his team at Tohoku University in Japan have combined multiple steps into a single reaction vessel, improving both the efficiency and the green credentials of the synthesis. This process, known as pot economy, not only circumvents the need for multiple time-consuming purifications, but also allows single reagents to catalyse multiple reaction steps. ‘One-pot synthesis has many intrinsic advantages: simple operation, high mass efficiency, low cost and less waste,’ explains Wei Zhang, a green chemist at the University of Massachusetts Boston, US. ‘These are also some of the key aspects of sustainability that we can address in organic chemistry.’

However, the design of this type of integrated process presents a number of complex challenges. Functional group compatibility is a key consideration and reagents must tolerate a mixture of substrates, intermediates and products, while efficiently and selectively achieving the desired transformations. ‘Remaining starting materials, side products and byproducts may also disturb successive reactions,’ explains Hayashi. ‘The key to the success of one-pot reactions is understanding what is going on in the reaction vessel.’

In the first of five reaction sequences, Hayashi effectively established the stereochemistry using a mild organocatalyst previously reported by the group. The four following transformations, all mediated by the base DBU, formed the central piperidine ring of quinine in 66% yield. Subsequent steps manipulated this core structure and, in pot four, an organometallic addition introduced the quinoline moiety. Significantly, this standalone step allowed the team to access quinine derivatives, particularly valuable for use as asymmetric reagents, in the final reaction sequence. ‘Its chiral scaffold with a basic amine moiety is an excellent structure for organocatalysts. But, used as a starting material, its derivatisation is very limited,’ says Hayashi. ‘With our synthetic method, it’s easy to modify the quinoline moiety: to functionalise it or make a naphthalene derivative instead.’ The team completed the synthesis using an SN2 reaction to form the characteristic quinuclidine bicycle, achieving the highest synthetic yield (14%) of quinine ever reported. 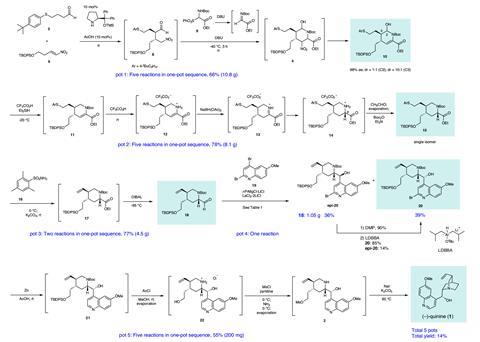 ‘Streamlined syntheses such as one-pot reactions are nature’s approach to making chemicals,’ comments Zhang. ‘They are not just for the research lab, but also represent the future direction for chemical manufacture.’

Hayashi is keen to see pot economy become a standard part of synthetic planning and has already applied this strategy to a number of natural products and drugs. ‘It’s important to synthesise molecules efficiently and in an environmentally benign way,’ he says. ‘I believe pot economy is a fundamental aspect of green chemistry.’